Hyderabad: The Andhra Pradesh government conceived the smart card project as a means to extend mainstream banking and financial services to the poor by using technology-based solutions to ensure efficient and timely transfer of government benefits and minimize leakages.

When the government started piloting the project six years ago, few believed it would go beyond that stage. The concept was new to banks, finding the right technology service provider was a challenge, and there were doubts about the execution and the viability of the project. 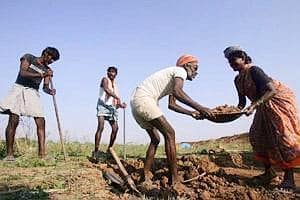 The state government releases the funds meant for the payment of wages under MGNREGS and pensions to the banks, and provides details of the eligible beneficiaries.

In turn, the banks open no-frills savings accounts and issue smart cards within three weeks to the beneficiaries.

A .V.V. Prasad talks about Andhra Pradesh’s ambitious smart card project, the advantages it brings and the potential for additional features.

A smart card contains a magnetic strip to enable identification, authentication, data storage and application processing. It holds data like fingerprints, photographs and other details of the beneficiaries in an encrypted form.

For enrolling the beneficiaries for smart cards and no-frills accounts, banks appoint business correspondents, or BCs.

Banks transfer the funds to a BC’s account online. The BC, in turn, appoints a customer service provider (CSP) at the village level, to whom the cash is transferred for payments. To qualify as a customer service provider, a person needs to be a resident of the village, should be a member of a women’s self-help group and should have passed class X.

The CSP will be trained in using point-of-sale (POS) machines and making payments.

The system creates a banking outpost in each village, eliminating wastage of time, and the money and effort the beneficiaries had to invest on travel, waiting in queues and losing valuable work days just to get their wages.

The only thing a beneficiary needs to do is to bring his or her smart card to the CSP. The CSP will swipe the smart card on a POS machine, which works similar to an automated teller machine. The PoS machine, after authentication, generates a printout of the pay receipt and instantaneously updates the payment systems of the bank, MGNREGS and social security pension servers.

Technology is critical to the success of the smart card project. Banks have tied up with technology service providers to build solutions for enrolment, authentication, data storage and processing. While some service providers use POS machines, others use mobile phones, contactless radio-frequency identification smart cards and integrated biometrics.

“In a mandal (an administrative unit comprising a group of villages) there may be one bank (branch) or two bank branches. If nearly 20,000 people have to open bank accounts, no bank branch can take that kind of load, so it’s difficult for the regular banking system," Prasad explained. “We have to resort to the technological alternative of financial inclusion, for which a kind of banking agent system is required. So, we have adopted the business correspondent model, whereby, every village has a banking outpost."

The smart card project has been extended to 1,098 mandals and 21,812 gram panchayats across 22 districts in Andhra Pradesh, with 14.5 million beneficiaries enrolled and 13.7 million receiving payments. The government made payments worth ₹ 4,000 crore in the fiscal year ended March, of which 2% was paid to the banks as commission, according to Prasad.

The smart card project’s major contribution is helping the government reduce leakages and frauds. Moreover, the project has helped banks find an alternative solution to deliver services to the unbanked poor.

“The transactions are very petty in nature, so if a bank has to undertake (transaction) they will have to incur a huge cost," Prasad said. But “when they are rendered through the business correspondent model, the banks were able to do at a minute cost."

Twelve banks and postal departments worked on the programme.

With the smart card project becoming successful, banks have started offering products and services such as fixed deposits, insurance and loans to customers.

Though the state government was able to reach the beneficiaries to a large extent through the smart card project, there is still an unfinished agenda. People living in the remote corners of the state are yet to be touched by the technological developments.

The state is now working closely with banks and service providers to devise an offline payment system for paying wages and pensions to people in remote tribal hamlets cut-off from facilities such as mobile and telecommunications.

Mint has a strategic partnership with Digital Empowerment Foundation, which hosts the mBillionth Awards.