Prague: Vaclav Havel, a dissident playwright who was jailed by Communists and then went on to lead the bloodless “Velvet Revolution" and become Czech president, died at 75 on Sunday. 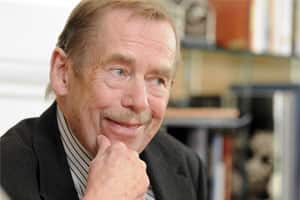 “Today Vaclav Havel has left us," his secretary, Sabina Tancevova, said in a statement.

Swedish foreign minister Carl Bildt said on Twitter, “Vaclav Havel was one of the greatest Europeans of our age. His voice for freedom paved way for a Europe whole and free."

The diminutive playwright, who once took Bill Clinton to a Prague jazz club and was a friend of the Dalai Lama and celebrities such as Mick Jagger, rose to fame by facing down Prague’s communist regime when he demanded they respect at least their own human rights pledges.

Just half a year after completing his last jail sentence, he led the peaceful uprising that ended Soviet-backed rule in Prague and emerged in charge at the mediaeval Prague castle.

“He was a symbol and the face of our republic, and he is one of the most prominent figures of the politics of the last and the start of this century. His departure is a huge loss. He still had a lot to say in political and social life."

Havel became a guarantee of peaceful transition to democracy and allowed the small country of 10 million to punch well above its weight in international politics.

“Truth and love will overcome lies and hatred," was Havel’s slogan that Czechs remember from the Velvet Revolution days.

But at home, Havel lost some of his allure in the later years of his presidency.

Struggle For The Soul

Born in 1936, the son of a rich building contractor, Havel was denied a good education after the communists seized power in 1948 and stripped the family of its wealth.

Much of his presidential term was cast as a struggle for the soul of democratic reforms against right-wing economist Vaclav Klaus, who replaced Havel as president in 2003.

“In the Czech Republic, he was not only a prophet recognised worldwide, but also a concrete politician who made concrete political mistakes," Havel’s ex-adviser, Jiri Pehe, said.

Havel returned to writing, and published a new play, “Leaving", which won rave reviews and premiered in 2008.

When asked in a magazine interview that year if he wanted to be remembered as a politician or playwright, he said: “I would like it to say that I was a playwright who acted as a citizen, and thanks to that he later spent a part of his life in a political position," he said.