Through elections, protests, government formations and armed struggle, Arab countries in an arc from Libya to the gulf were engaged this past week more than ever in attempts not to simply overthrow leaders, but to decisively shape the orders that ensue.

The centre of that struggle was again in Cairo, in the landmark Tahrir Square, where a protest movement was revived and dozens were killed in violence. Some hailed it as a new revolution, or the opening of a front in the old one. But it might be better termed the end of the beginning, as within the span of just a week, events breaking out here and across the region seemed as seminal as any since that burst of optimism when the revolts erupted 11 months ago. 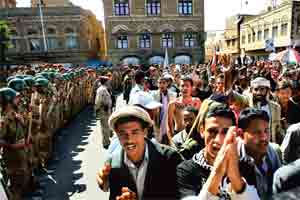 No one expected the Arab revolts to be a simple march ahead, but rarely have things seemed so much in flux, with more potential for fragmentation, bloodshed and disarray. While many analysts describe the tumult as an inevitable reckoning with the legacy of dictatorship, others worry the region may face years of unrest before systems emerge to replace the stagnant, US-backed order that held sway for so long.

Fears of chaos are being voiced, as are hopes of making revolutions real. The battle has become so pitched in places such as Egypt that the forces of reaction—namely the military— seem more determined than ever to hold on.

“Will it lead to compromises here and there?" added Shallak, a former government minister. “Or will we keep seeing a state of panic and pressure? We don’t know."

Tunisia’s election this month, hailed as a model, was remarkable for its civility. But it was the exception, as the rest of the region witnessed a tumultuous week.

President Ali Abdullah Saleh agreed to resign in Yemen, but the forces fighting the struggle there remain entrenched. At the same time, Libya’s former rebels formed a government but face the challenge of reconciling regions that act as city states with their own militias. An eagerly awaited report on Bahrain’s crackdown on largely Shiite protests was delivered.

In Egypt, the first round of voting for a new parliament was to begin on Monday. But the contest between protesters and a military they view as part of the ancien regime of president Hosni Mubarak has overshadowed the ballot.

“The ruling military council is corrupt and not that much different than Mubarak," said Mohamed Sharawy, a 45-year-old driver, at a fiercely nationalist rally convened Friday to support the country’s military rulers. “But they are all we have right now."

Mubarak’s authority ended in February. The term of art now is military rule, led by a council of 20 generals, whose critics lambast it for delaying presidential elections, monopolizing power and condoning and even perpetuating the torture and abuse of the old regime. Rhetorically, it has deployed the same tools of its predecessor, too, stoking xenophobic sentiments and appealing to the old mantra of security and stability.

Though some in Tunisia, particularly the Islamists, feared a shadow state there, it was nowhere as pronounced as Egypt, where the military has placed its bets on what it believes is a silent majority weary of the country’s prolonged uncertainty and anxiety.

“The word ‘stability’ is but a righteous word used for wrongful ends," a columnist wrote sharply on Friday in the Egyptian newspaper Al Yawm al Saba. “This stability was not achieved throughout the past months. Why should it be achieved in the coming months?"

In Tahrir Square, the most memorable of the arenas of Arab revolts, Sharif Ibrahim, a high school teacher, looked over one shoulder at crowds surging again, imbued with the promise of revolution. Over his other shoulder was the detritus of days of battle between the police and protesters, a glimpse at the failure of those promises.

“There’s a question mark drawn over all of our heads," Ibrahim said.

Fear is still the calculus in many of the transitions.

The Syrian government of President Assad faces unprecedented pressure, both from the Arab League and internal dissenters. An International Crisis Group report warned last week that the crisis there “undoubtedly has entered its most dangerous" phase. The government has relentless stoked fear of a bloody aftermath to justify its rule, even as its very policies have begun degrading the institutions of the state, presided over an economic crisis and dangerously exacerbated sectarian tensions.

In a startling disconnect, Al Dounya, a semi-official TV channel, began a midday news broadcast last week by saying, “May your morning be as bright as jasmine in Damascus."

“Fear is evident in Damascus, and you see it in people’s eyes," said Makarem, 30, a businessman who gave only his first name. “More people are turning against the regime every day, but even those are afraid of what will happen next."

In Libya, the revolution’s promise has run up against shaky efforts—by clans, cities and various military forces that formed a loose coalition to overthrow Moammar Gadhafi —to come up with a working government. The new prime minister named leaders of militias in Zintan and Misrata, two cities that proved crucial in overthrowing Gadhafi, as the ministers of defence and the interior in a move that seemed aimed at both curbing their obstinacy and balancing the power each represents.

Fighters from Zintan have refused to withdraw from the capital, and disarming young men with guns remains a stark challenge. “I’m hopeful but a little panicked about all the challenges," said Idris Al Fasi, a senior adviser at the state electricity company.

In Yemen, Saleh signed an agreement on Wednesday to step down. But the demonstrations have not stopped, with protesters angry about the dealto grant him immunity. The opposition defended it, saying it was the only way to stave off civil war.

In Change Square in Sanaa, protesters said they had learnta lesson from Egypt: The departure of the ruler does not mean the revolution is complete.

“Hosni Mubarak left. They went back to their houses before their goals were achieved," said Ali Mohammed al-Hadda, a public employee sitting in one of hundreds of tents that looked permanent as protesters poured concrete and reinforced walls.

The universal celebration of revolts in Egypt and Tunisia has given way to a more complicated picture. Gulf states, and the Qatari-owned news channel Al-Jazeera, support predominantly Sunni uprisings in places such as Syria. Meanwhile, Iran and its ally in Lebanon, Hezbollah, both Shiite Muslim, offer support for the Shiite-led opposition movement in the gulf state of Bahrain, a major US ally.

US officials had hoped a newly delivered report that was sharply critical of Bahrain’s repression might offer a way forward for reconciliation, but the country seems so polarized, and the Sunni monarchy so resistant to meaningful political reform, that unrest there is almost sure to continue.

In a new wrinkle, Saudi Arabia, which intervened in April in Bahrain’s protests, saw demonstrations last week among its own restive Shiite minority in the oil-rich eastern region of Qatif. Four Shiites were killed in violence that the government— echoing the charges of Egypt’s leaders—blamed on assailants acting on “foreign orders".

Voters went to the polls in Morocco on Friday in the first parliamentary elections since passage of a new constitution in June. A moderate Islamist group, the Justice and Development Party, won the most seats, but protest leaders there had urged a boycott, saying the new constitution only reinforces the king’s ultimate authority.

And fear, so familiar, was pronounced again.

“We don’t need chaos like in Egypt or Yemen," said Ahmad Mzrouk, owner of a small restaurant in Casablanca. He railed against protest leaders there. “What are they doing to make the country better?" he asked. “Stop screaming, it’s bad for the economy."