Home >Politics >Last dredger pulled out, work on Sethusamudram grinds to a halt

Last dredger pulled out, work on Sethusamudram grinds to a halt

Last dredger pulled out, work on Sethusamudram grinds to a halt

Bangalore: Work on the controversial Sethusamudram Ship Canal Project to create a shorter shipping route between the country’s eastern and western coasts has ground to a halt after the last dredger digging the channel was pulled out of service. 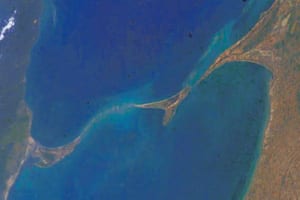 A bridge too far: A Nasa photo of Adam’s Bridge. Nobody knows when the work on the Sethusamudram project will start again

State-run Dredging Corp. of India Ltd (DCI) removed its dredger—a specialized ship used to deepen the channels of ports and harbours—from the project when its four-year contract with Sethusamudram Corp. Ltd ended on 27 July.

Nobody knows when the work will start again.

“We are trying to revive the dredging contract between DCI and Sethusamudram Corp. Ltd," a shipping ministry official said, but he could not give a time frame for reviving the contract. He did not want to be named because of the sensitive nature of the issue.

The delays were the result of a controversy over the project after Hindu groups opposed dredging through a ridge they believe was built by Hindu god Ram.

Meanwhile, dredging continued on the non-controversial Palk Straits area, where the government has so far spent close to Rs1,020 crore. Experts say the stoppage of dredging will undo the work already done.

“When you stop dredging work and restart later, you’ll have to start all over again," said a DCI executive. He did not want to be named because of his company’s policy on speaking to the media.

“They will have to do dredging all over again as the area in the Palk Straits that was dug to create the new lane must have accumulated silt by now," said an executive with a European dredging firm. He did not want to be named.

DCI is India’s biggest dredging contractor while Sethusam-udram Corp. is a special purpose company formed by the Union government to raise funds and implement the project.

Billed as India’s Suez Canal, the Rs2,427.4 crore Sethusamudram project is expected to reduce ship journeys between India’s western and eastern coasts by as much as 30 hours or up to 424 nautical miles (1 nautical mile=1.82km) by creating a channel between the Indian mainland and Sri Lanka.

Ships now take a detour around Sri Lanka in the absence of a continuous navigational channel connecting the coasts, because of a reef known as Adam’s Bridge south-east of Rameswaram near Pamban in Tamil Nadu.

To overcome this, India formulated an ambitious scheme to create a continuous navigational channel around its coast.

The project involved boring a new shipping lane connecting the Gulf of Mannar and Bay of Bengal through the Palk Straits and Palk Bay.

Dredging work in the Adam’s Bridge region, the controversial part of the project, was stopped after a Supreme Court order on 31 August and 14 September 2007 on the basis of petitions filed against it.

Hindu groups say the project would destroy a rock and sand ridge built by Ram, as mentioned in the religious text Ramayana.

As proof of that bridge, they point to a ridge in a shallow stretch of sea between southern India and Sri Lanka. The Congress-led United Progressive Alliance government at the Centre says it was moulded by ocean tides.

The shipping channel, a 167km long, 300m wide groove to provide for safe two-way navigation, will have to be dredged through that ridge.

Following a Supreme Court order, the Union government set up a committee headed by R.K. Pachauri, director general of The Energy and Resources Institute, to consider an alternative alignment for the project.

The committee is yet to submit its report.

Work on dredging the new shipping lane started on 2 July 2005 and was to be completed in 180 weeks, or about 3.5 years. DCI had deployed seven dredgers, some its own and others hired from the market, to excavate the lane.

“We lost two years on dredging the Adam’s Bridge area because of the stay order of the Supreme Court. The new timeline and revised cost for completing the project are now being finalized," the shipping ministry official mentioned earlier said.