The no-trust motion was first moved by Telugu Desam Party, which quit NDA in March over its demand for special status for Andhra Pradesh

New Delhi: The stage is set for a political clash between the ruling National Democratic Alliance (NDA) and opposition parties after Lok Sabha Speaker Sumitra Mahajan on Wednesday agreed to take up a motion of no-confidence against the government. The motion is scheduled to be taken up for discussion on Friday.

Ironically, the motion was first moved by former NDA ally Telugu Desam Party (TDP), which quit the alliance in March over its demand for granting a special package and special status for Andhra Pradesh. A similar motion was also moved by TDP, Telangana Rashtra Samithi (TRS) and other opposition parties during the budget session but it was not accepted.

“The House will take up the debate (on the motion) on Friday, 20 July. The discussion will be held for the full day, followed by voting on it," said Lok Sabha Speaker Sumitra Mahajan when members reassembled after the lunch break on the first day of the monsoon session of Parliament.

The no-confidence motion comes on the day Prime Minister Narendra Modi, reaching out to opposition parties, said the government was ready to debate any issue.

“In this monsoon session, there are many issues that need to be discussed and decisions need to be taken on several issues. I hope that all political parties will use the time of the House to take important decisions for the benefit of the country. The government is ready for discussion on every issue that any party member may want to raise," Modi said.

Although the opposition parties will likely try to corner the Union government on issues such as mob lynchings, rural distress, atrocities against women and Dalits and changes to a law meant for protecting Scheduled Castes from atrocities, the government has a comfortable majority in the Lower House with 309 members, including 273 of the Bharatiya Janata Party (BJP). 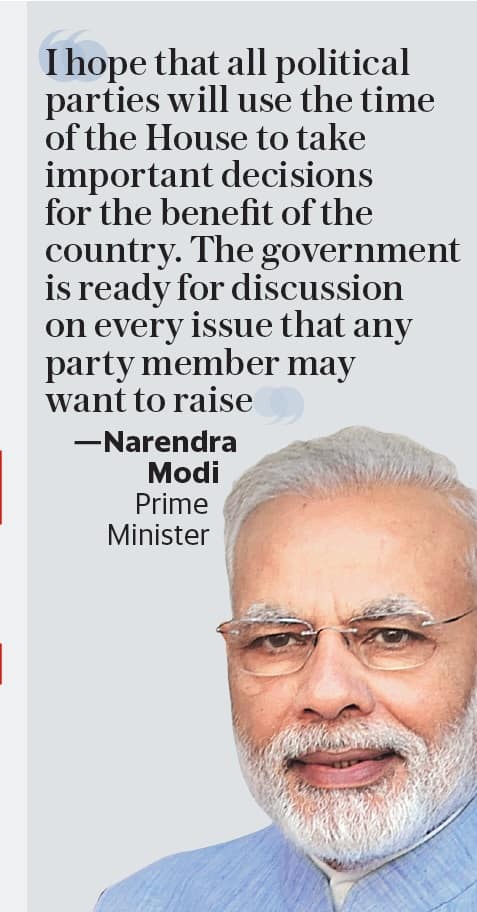 “The entire country has confidence in Prime Minister Narendra Modi," said parliamentary affairs minister Ananth Kumar, adding that the government was prepared to face the no-confidence motion brought in by opposition parties.

The present strength of the Lok Sabha is 535, including the Speaker. The government needs the support of 268 members of Parliament (MPs) to cross the halfway mark.

“More than 50 members are supporting the motion, so the leave is granted (to bring in no-confidence motion)," Mahajan said while accepting the notice. When Congress leader Mallikarjun Kharge demanded that the Congress party should get the opportunity to move the motion of no-confidence since it was the largest party, Mahajan explained that as per the rules, the member who brought the motion first should be allowed to move it.

“It’s not a question of big party, small party... Those who brought the no-confidence motion —I read all the rules—the person who first brought the motion has to be called first," Mahajan said.

Several parties including the BJP and Trinamool Congress (TMC) have issued a whip to their members to be present for the debate on Friday.

The House was adjourned briefly over the TDP’s demands for a special package for Andhra Pradesh.