Why absence of opinion polls for UP is no surprise

A statistical tidbit from the 2014 general election that has been largely glossed over in the face of the Bharatiya Janata Party’s (BJP) spectacular victory is that it won more votes in Uttar Pradesh than its two rivals—the Bahujan Samaj Party (BSP) and Samajwadi Party (SP)—put together. The BJP won 34.3 million votes, compared to the SP’s 18 million and the BSP’s 15.9 million.

With most of Uttar Pradesh witnessing either a three- or four-cornered contest, the BJP swept the state. While it is tempting to use this data point to suggest that the BJP might do well in the forthcoming assembly election, the fact remains that the 2014 general election was a massive outlier.

ALSO READ | Poll forecasting: How to convert votes into seats

In the past two assembly elections in the state, the party came a distant third, registering barely half as many votes as the respective winners.

And the BJP’s vote share in Uttar Pradesh has been going down over the past three assembly elections.

Assembly elections in Uttar Pradesh have been games of fine margins over the past decade. With four major parties in the fray (including the Congress), a 30% vote share has been sufficient to get absolute majority in UP. 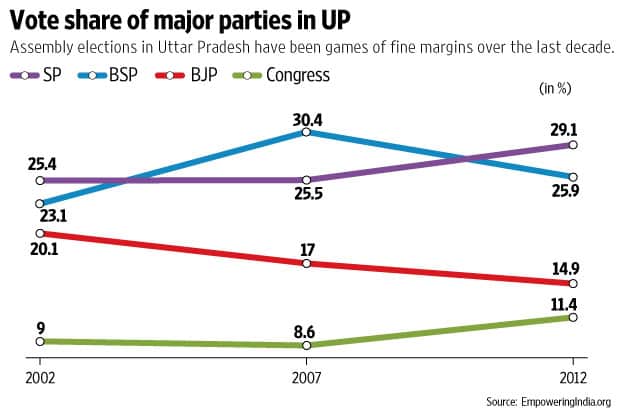 In the 2012 assembly elections, the difference between the SP, which won a comfortable majority in the assembly, and runner-up BSP, was just three percentage points. While the SP retained its vote share between the 2002 and 2007 elections, it ended up losing a third of its assembly seats.

Such fine margins make the forthcoming UP assembly election extremely hard to call.

The volatility in vote swings in the state also doesn’t help matters. If the 2014 election hadn’t happened, things might have been far easier to predict, since the uncertainty in vote share would have been smaller.

The BJP’s surge in that election, however, has played havoc with the ability to predict.

While opinion polls can give a fair idea of state-wide vote share, the problem with a large state like Uttar Pradesh is that the distribution of these votes is what determines who gets how many seats.

The standard practice among pollsters is to use a historical election as a “base", and look at swings relative to that election in order to make their predictions.

ALSO READ | SP factions deadlocked, even as UP election clock is ticking

With the past two elections in Uttar Pradesh (the 2012 assembly election and 2014 general election) having shown vastly different results, the forecasts will be extremely sensitive to the election chosen as the base.

Recent events have only served to increase the volatility. First, there was the cancellation of Rs500 and Rs1,000 currency notes by the BJP-led Union government.

Despite a drop in economic activity and severe hardships faced by people on account of the currency note cancellation, the discourse among the common people has remained largely favourable to the BJP. How it will affect voter behaviour in the forthcoming election is a massive unknown.

While opinion polls can ask questions related to demonetisation, whether people will respond truthfully to such polls is a big question mark.

Then, the generational conflict in the SP between Uttar Pradesh chief minister Akhilesh Yadav, and his father and uncle, has brought in a further level of uncertainty. Even if we were to assume that the party will split and some voters might desert it, the outcome of the election is conditional to the lines along which the party will split.

A split right down the middle might mean one thing from the electoral viewpoint, while a split where only a small group breaks away might have a completely different impact on the election. Even well-designed opinion polls may not help much in determining how the conflict in the SP will affect the election.

While there has been much commentary in both mainstream and social media about the Uttar Pradesh election, opinion polls have been conspicuous by their absence—none of the major polling agencies have published a prediction after October.

Given how complex these elections are to predict, this is actually no surprise.