India maintained its lead over China in all major markets including the US, European Union and Africa. Exports of pharma products to the US increased 23.4% from $3.84 billion to $4.74 billion while China’s exports to the US rose from $1.16 billion to $1.34 billion in the same period. India also maintained its lead with pharma exports to the European Union and Africa both growing to $1.5 billion and $3.04 billion respectively. China’s exports to both markets showed a declining trend.

India continues to be a hub for low-cost production which in turn aids manufacturing for exports. Sun Pharmaceutical Industries Ltd, Cipla Ltd, Dr. Reddy’s Laboratories Ltd, Lupin Ltd, Zydus Cadila Ltd and Wockhardt Ltd, which between them account for 33% of the country’s total exports, have emerged as world leaders in low-cost innovation and production of four segments—Active Pharmaceutical Ingredients (APIs), Contract Research and Manufacturing Services (CRAMS), Formulations and Biosimilars. 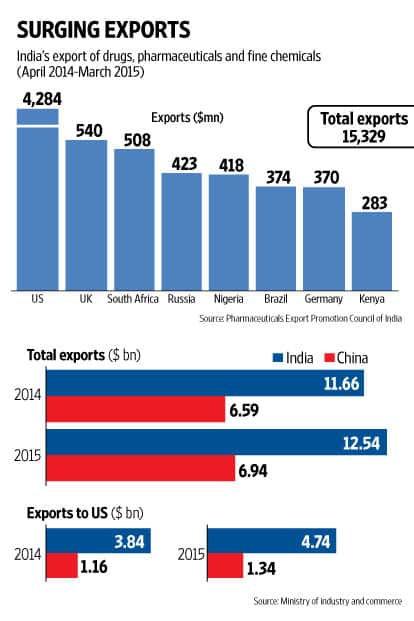 India has always had an advantage due to its strong generic pharmaceutical industry (70% of the market share in terms of revenue), which supplies drugs at prices that are among the lowest in the world.

The US is the largest market for India’s pharmaceutical exports (27% of the total exports), followed by the UK, South Africa, Russia, Nigeria, Brazil and Germany, according to export statistics (2014-15) published by the Pharmaceutical Export Promotion Council of India.

India exports more than half of its production of pharmaceutical products and procures raw materials from domestic and foreign sources, with China being the largest exporter of APIs to India.

“India has maintained its supremacy in formulation exports for a very long time since the pharmaceutical industry has been established," said P.V. Appaji, director general, of the Pharmaceutical Export Promotion Council of India.

He added that this lead has been possible due to the knowledge and technical expertise of domestic pharma companies.

Still, local drug makers need to maintain a rapid of growth to maintain India’s lead in the global markets, he said.

“India will continue its lead in the short term, but it is a long-term challenge to maintain and increase the volume of exports which can be overcome with real entrepreneurship and skilled manpower," Appaji added.

India is the largest provider of generic medicines globally, with a 20% share in supplies by volume. China accounts for 1.5% of the global drug market.