It's not the availability of buses or revenues that is killing DTC, it is fleet and cost management

In its efforts to get people off private transport and check air pollution, Delhi wants to increase the contribution of its public bus service. But the entity that operates this service, the Delhi Transport Corporation, is the worst-performing of the five city bus services in India whose fleet size exceeds 1,000. And it’s not the availability of buses or revenues that is killing DTC. It is fleet and cost management—areas in which it could learn a thing or two from its peers in Bengaluru and Chennai.

Delhi the least profitable, Bengaluru the most

Delhi’s city bus service is the least profitable among the five cities listed here, losing more than R2 for every rupee of revenues. Mumbai, too, is bleeding profusely. In comparison, Bengaluru—the largest city-bus operation in India by fleet, revenue and mileage—was profitable between 2010 and 2011, before posting a marginal loss in 2013. 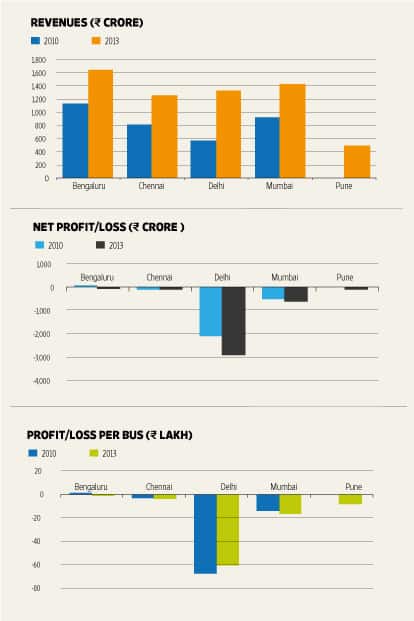 Bengaluru has a fleet on the road that is larger than that of Delhi. Its fleet addition between 2010 and 2013 was characterized by incremental additions and high utilization. Delhi, in comparison, saw a burst of addition of buses in 2011. But its fleet on the road is down about 19% from its 2012 high. And it’s not using one out of every five buses in its fleet. 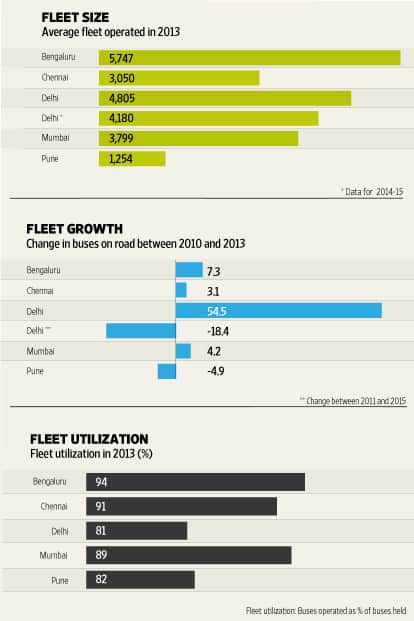 Bengaluru and Chennai are more representative when it comes to serving their population with buses, though Delhi also has an excellent metro service. What the southern cities do better is squeeze more from their buses, ferrying more passengers and logging more than twice the mileage of Delhi. 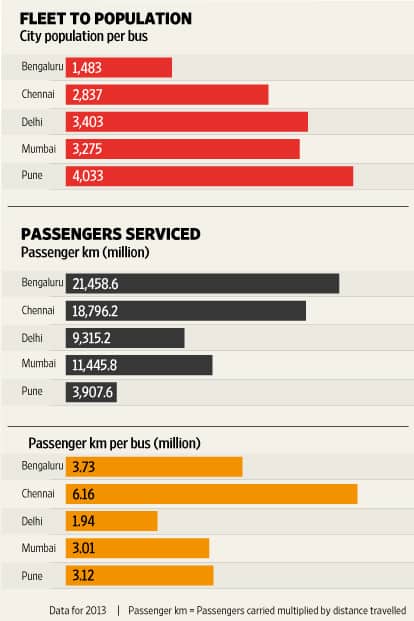 More than revenues, what Bengaluru and Chennai have done significantly better than Delhi is managing costs. Delhi, Mumbai and Pune, in fact, earn more revenue per unit than their southern peers. But they lose more on the cost side, with debt servicing being the biggest drag for Delhi, accounting for nearly half the money spent.