New Delhi: When Deepti Madhavan got a call from MeritTrac Services Pvt. Ltd last year about an opening the skills assessment company had for an assistant manager for business development, she prepared for a flight to its head office in Bangalore. 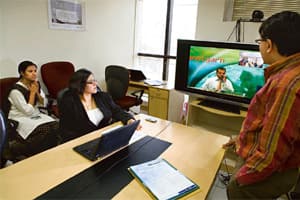 No need to travel: The recruiting team at AbsolutData Research and Analytics interviews an outstation candidate. AbsolutData’s Dutta says a video component better gauges the credibility of a candidate. Madhu Kapparath / Mint

Instead, she was asked to visit the local Reliance World outlet in Pune. A supervisor interviewed her through video conferencing from Bangalore and hired her a few days later without meeting in person.

“When the interview started, I felt it was a little unusual," says Madhavan, explaining how the video system which allowed her to see herself on screen might have helped her land the job. “Then I could see I was not sitting properly and (that) I should smile more and stop looking nervous."

The resume and in-person interview—for long the most important pieces of getting a job—are taking a back seat as firms cut costs and make recruiting processes more efficient, turning to technology such as online assessment tests and video conferencing to make the first upgrade.

Convergys Corp., for example, recently retooled a recruitment process that relied on judgement calls of remote recruiters and invitations for candidates to visit the nearest office in person. With a mix of online technical tests, automated phone systems and centralized decisions, the business process outsourcing firm can now process hundreds of applicants in a few hours, says recruitment director Ashutosh Sinha, who is hiring about 800 people a month even during the slowdown. “We send over a consultant and have (the candidate) get on the Internet, take a test and they are done in 3 minutes and the results are sitting in Delhi."

Other recruiters share similar stories. Research firm AbsolutData Research and Analytics (P) Ltd, for example, uses video conferencing to hire from campuses that are far from the firm’s Delhi headquarters.

It relies on college placement cells to administer several rounds of tests, according to Sudeshna Dutta, the company’s co-founder and executive vice-president for human resources. Those who make the cut are interviewed remotely through video conferencing and offered jobs.

Skills assessment firms report a significant uptick in online tests. Two years ago, only 5% of MeritTrac’s 30,000 assessments per month happened online; now 35-40% of its 125,000 tests a month are taken online, according to its chief executive, Madan Padaki.

Much of the shift is a cost-cutting measure. When a Bangalore-based software company was looking for a new head of staffing and was interested in a Delhi-based candidate, its initial interaction was through Skype.com and a Web cam, says Mona Baruah, a consultant with recruiting firm Stellar Search and Selection Pvt. Ltd who served as matchmaker.

A year ago, Baruah says, they would have probably first spoken to the candidate over the phone and then flown him in for a meeting. “(The video interview) is picking up now very aggressively as companies cut down on travel costs."

Job websites, too, are experimenting with newer technology to help firms screen candidates remotely and shortlist them quicker. Shine.com, for example, launched a video interview service in February that allows candidates to record themselves answering a few questions that are preselected by the potential employer. The video clip is then logged and made available for managers to view in their own time, according to Benita Paul, who handles new products at the job portal. Shine.com is owned by Firefly e-Ventures Ltd, a subsidiary of HT Media Ltd, which publishes Mint.

Another Web company, Naukri.com, run by Info Edge (India) Ltd, has launched a new site targeting freshers called Firstnaukri.com that requires candidates to upload their school and college marks and photographs. The site also has a video-resume capability that allows candidates to upload a 1-minute video which they can shoot with their mobile phone.

Since the website is geared towards “companies that are looking for profiles with communication skills and presentation skills, it is very imperative that companies can meet candidates face to face," says Deepali Singh, who is business head for Firstnaukri.com. Around 10% of applicants, she says, have uploaded a video with their profile.

Other products that add multimedia to a resume, such as an audio clip, are also becoming popular, according to Nilanjan Roy, product head at Times Business Solutions Ltd, which runs Timesjobs.com. The voice resume has picked up in unexpected sectors such as software, telecom and biotechnology, says Roy.

Many of these services are also designed to help with another problem faced by many recruiters; candidates who are not who they say they are. “You are never 100% sure the resume on paper is correct until you meet the person live," says Convergys’ Sinha, who has started using video conferencing for senior-level interviews in the past six months.

AbsolutData’s Dutta says a video component better gauges the credibility of a candidate. “You can get a sense of the individuals," she says. “It has always worked in the candidate’s favour. It is almost like a first round (interview)."

AbsolutData has recently started using blogs to interact with candidates and answer their questions. Timesjobs.com is launching a new service that allows candidates to search and apply for jobs directly through messaging services such as Goggle chat or Yahoo messenger. And Convergys, too, recently set up a mico-site on the job portal Monster.com which gives candidates targeted information about the company and has helped it improve its strike rate between 5% and 12%, depending on the experience level, says Sinha.

The use of newer types of technology amid a slowdown represents a philosophical shift for recruiters, says MeritTrac’s Padaki. “In boom times, every organization gives the benefit of doubt to the candidate. If you say you have the skill set, come in and we’ll interview you or train you," he says, “Now, (the attitude is) if you tell me you have certain skill sets, you prove it. The onus is on the candidate."