Kolkata: A cyclone, accompanied by heavy rain, hit the coastal areas of West Bengal on Monday, leaving at least 18 people dead and around 100,000 affected.

Airport operations in Kolkata came to a halt—several flights were cancelled and those bound to Kolkata were diverted to other airports. 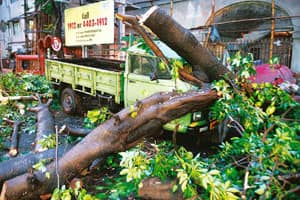 Disaster zone: A truck that was damaged by the cyclone in Kolkata. Jayanta Shaw / Reuters

Cyclone Aila first hit Sagar islands in south Bengal around 1.30pm. Official sources put the toll at 18, including four people from Kolkata and eight from South 24 Parganas, the worst affected district. Casualties can rise as unofficial reports pouring in from various affected districts claim at least 30 people were dead.

Chief minister Buddhadeb Bhattacharjee held an emergency meeting to review the situation. He will visit Diamond Harbour and state finance minister Asim Dasgupta, who also convened a meeting on Monday, will visit North 24 Parganas on Tuesday to oversee relief and rescue operations. The chief minister has requested Union finance minister Pranab Mukherjee to deploy the army for rescue operations.

Dasgupta said at least 100 embankments had caved in, flooding several villages and leaving thousands marooned. Rising waters cut off many villages in Sagar, Kakdwip, Namkhana, Gosaba and on some islands in the Sunderbans.

He said the government had called in the army and the Border Security Force to assist the local administration in rescue and relief operations. Helicopters were also deployed to move people from coastal areas to safer places.

In New Delhi, the India Meteorological Department (IMD) said the cyclone will abate in 24 hours. “We expect the wind speed to peak in the next 24 hours. This isn’t an unusually strong cyclone and we don’t expect damage to be widespread," Ajith Tyagi, director general, IMD, said. Tidal waves triggered by the storm in the Bay of Bengal damaged thousands of houses in Bangladesh. At least seven people were killed , Bangladesh officials said.