Can the Congress retain its hold on Mizoram?

Mizoram's development indicators have improved under Congress rule; but concerns over economy and immigration threaten the party's prospects

New Delhi: In a tiny corner of India, as its neighbours have fallen under the sway of the ruling Bharatiya Janata Party (BJP), Mizoram has remained a Congress stronghold. After seven state elections, the BJP has yet to win an Assembly seat in Mizoram and, in 2013, the party could only secure 0.37% of the vote share. In contrast, the Congress, led by chief minister Lal Thanhawla, swept the state winning 34 of the 40 Assembly seats and 45% of the vote share.

Mizoram’s demographics is one reason for the BJP’s lack of success so far in the state. Nearly 90% of the state’s population is Christian, and the Church holds considerable influence over even temporal matters such as elections .

Yet, the BJP’s ability to make inroads in other Christian-dominated states, and its success in weaning away seasoned politicians, suggests that the party may well be on the verge of opening its account in Mizoram.

For a party that has traditionally been restricted to the Hindi heartland states, an impressive showing in Mizoram would be a big morale-booster, and help it breach the final frontier in the north-east region, where it has performed exceedingly well since 2014 (chart 1). This time, the BJP’s thrust on the region will complicate matters even as the Congress battles anti-incumbency and infighting . The BJP’s surge across northeastern states (chart 3) will inspire it to replicate that success in Mizoram. 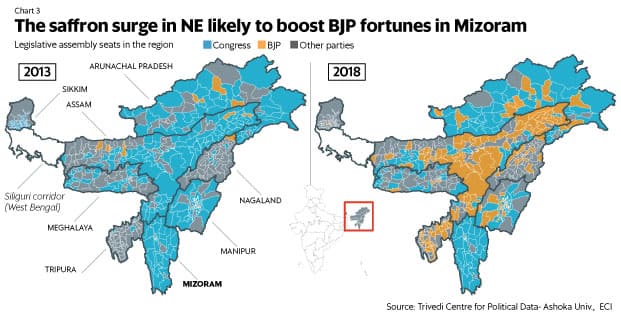 For the Congress, its ability to contain factionalism and project its developmental record may be key to its performance.

Following a violent insurgency, which led to statehood, Mizoram has enjoyed relative peace and development under successive governments. On several development indicators, by Indian standards, Mizoram stands out.

In health, infant mortality (27 deaths per 10,00 births) and nutrition indicators (28% of children are stunted), Mizoram fares relatively than other states. Using a multidimensional poverty index, an aggregate measure of poverty calculated by researchers from the University of Oxford, Mizoram outperforms most of India and even its north-east neighbours (chart 4). Between 2005-06 and 2015-16, when the Congress ruled the state, the proportion of people living in poverty in Mizoram decreased by more than half from 31% to less than 10%, the multidimensional poverty index shows.

In a 2016 research paper, K.V. Reddy of Mizoram University attributes some of Mizoram’s development success to civil society and grassroots Christian organizations that have a strong presence in the state.

However, while development indicators have improved, the state’s growth has not been very impressive, with Mizoram’s contribution to Indian gross domestic product hovering around 0.1% over the past decade. One reason for this is an over-reliance on a weak agriculture sector. Industrial activity is lacklustre and the state remains starved of investment. Over the past decade, there have been only nine investment projects completed in Mizoram, according to data from the Centre For Monitoring Indian Economy Pvt. Ltd’s project-tracking database.

One important reason for the lack of industrial activity and investment is poor infrastructure and connectivity. With no major railway line and only a small airport, Mizoram remains disconnected from the rest of the India.

However, a more pressing political issue could be immigration. Mizoram is bordered by both Bangladesh and Myanmar and groups in the state have led protests against migrants. As part of their campaign, the MNF has promised to implement a National Register of Citizens to detect illegal immigrants in the state. These elections, however, will not be a simple three-way battle between the MNF, Congress and BJP. Two new parties, the People’s Representation for Identity and Status of Mizoram, a party formed out of an anti-corruption non-governmental organization, and the Zoram People’s Movement, an alliance of seven regional parties, could eat into the vote-shares of major parties.

Mizoram, which contributes just one seat to the Lok Sabha, may seem unimportant to national politics. However, how the state votes could have significant symbolic value. A Congress victory would allow the party to maintain a foothold in the north-east while a BJP victory would let the party to significantly strengthen its grip on the region.