The poor state of school infrastructure

While many states provide toilets and educated teachers, most fare poorly in terms of electricity access, student-class ratios and number of students per teacher

Schools are supposed to be the temples of learning, but the average primary educational institution in India is likely to be a dingy, dilapidated place without access to electricity, toilets and with too few teachers. True, just having great school infrastructure is not sufficient to improve learning outcomes, but it is certainly a necessary condition. The latest Annual Status of Education Report shows that learning outcomes are abysmal in Indian schools. The following charts show that there is a lot of work needed in school-level infrastructure when the government announces a new education policy which is in the works.

The 2013-14 edition of the District Information System for Education (DISE) report shows that India’s schooling system is overwhelmingly skewed towards primary schools. There are five times more primary schools than there are secondary schools. At the state level, this discrepancy becomes even more stark. The worst performer in this regard is Bihar with a ratio of 13.3:1 while the most balanced is Chandigarh with a ratio of 1.2:1.

The reason for this skew is a sharp rise in small schools (enrolment of fewer than 60 students), and these are all primary schools, says Rukmini Banerjee, director at the Annual Status of Education Report Centre. This explosion in primary schools is often counter-productive since the schools are too small to have adequate infrastructure or teacher strength. Increasing the size of these schools and including a secondary education section is the way forward, she added. 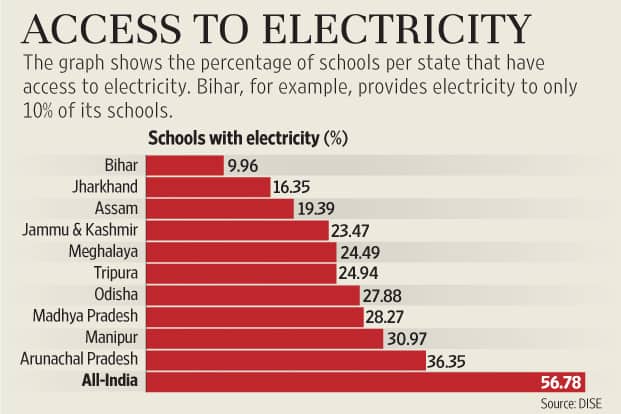 Even within larger schools, the level of infrastructure needs a lot of work. The DISE data shows that only 6 out of every 10 schools in the country have access to electricity. State-level data throws up an even grimmer picture—one-third of states do not provide electricity to the majority of their schools. Bihar again is the worst offender with only 10% of its schools having access to electricity. Some other states such as Punjab, Gujarat and Haryana fare very well in this regard with almost all their schools getting electricity.

In the case of toilets, however, India fares quite well. According to DISE data, 86% schools in India have boys’ toilets while 91% have girls’ toilets. Most of the states have toilets in more than 80% of their schools. Among the worst performers are Arunachal Pradesh and Meghalaya.

However, the DISE numbers may be a little misleading since they do not make a distinction between usable and unusable toilets. While, there are very few schools that have no toilets at all, the latest ASER report says that only 65% have usable toilets.

The student-teacher ratio in India stands at 27.25:1 across all levels of schooling. This seems healthy in light of the Right to Education Act stipulation of a ratio of 30:1. However, the student-teacher ratio of 41:1 in higher secondary education needs some work. Uttar Pradesh, in particular, needs to hire many more teachers as its ratio of 60:1 is well above the recommended level.

The discrepancy between these figures and those in the latest ASER edition (which shows higher student-classroom and student-teacher ratios than DISE) can be put down to the fact that ASER is a survey and focuses only on rural India.

The current education policy was formulated by then prime minister Rajiv Gandhi in 1986. It is high time it was updated and these are just some of the issues that need to be addressed in the new policy.

However, “the real priority focus of the new education policy must be learning outcomes and the syllabus. There must also be publicly available targets for students to meet at each level so that even parents can contribute in helping the children meet these targets," says Banerjee.

This is the second of a two-part data journalism series on school education in India. The first part dealt with the learning outcome gap between private and government schools.

Catch all the Education News and Updates on Live Mint. Download The Mint News App to get Daily Market Updates & Live Business News.
More Less
Subscribe to Mint Newsletters
* Enter a valid email
* Thank you for subscribing to our newsletter.
Topics
plain-facts