Trapped in a shrinking net

Trapped in a shrinking net

New Delhi: The Corbett tiger reserve in Uttaranchal has the highest density of tigers in the world, the government said last Thursday, based on the detailed findings of a count that took place over 2006 to 2010.

The big news which emerged from that exercise broke four months ago, when it was announced that the number of tigers in the country had risen more than 10%, but the cheers were soon drowned out by complaints.

Some states—West Bengal, Madhya Pradesh, Bihar and Orissa among them—were unhappy with the so-called India Tiger Estimate 2010, and claimed that the population of the animal in their states was much higher. 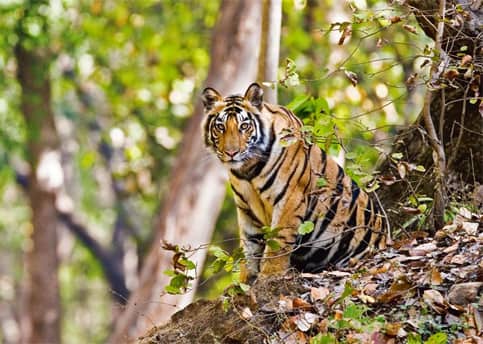 Conservation Focus: Experts say the major concern should be the estimation of tiger populations in non-protected areas and the enforcement that’s needed to conserve them Photo www.tigersintheforest.com

This chorus of disapproval prompted the ministry of environment and forests to order that more details about how the four-year survey was conducted be made public. The results of that were unveiled on 28 July by the National Tiger Conservation Authority and the Wildlife Institute of India (WII). This included detailed state-wise information on the status of prey, co-predators, habitat and recommendations for tiger habitat management. Also part of the report was a Management Effectiveness Evaluation report (MEE) for all tiger reserves in the country.

The detailed findings showed no change in the numbers that had been announced four months ago. According to the second country-level estimation, conducted across 39 tiger reserves in three phases and unveiled on 28 March, India had 1,706 tigers (roughly an average of the lower limit of 1,571 and upper limit of 1,857), up from 1,411 (1,165 and 1,657) in 2006. This latest count cost ₹ 12 crore. The one before that—in 2006-07—cost ₹ 10 crore. The 28 July data also showed that 635 of the total number had been individually identified by camera traps.

The release of the data won’t end the controversy, but the noisy squabble over figures is drowning out what should be the real debate—that of the inexorable dwindling of the tiger’s habitat.

“Numbers never helped," says P.K. Sen, former director, Project Tiger. “Since the inception of Project Tiger (now the National Tiger Conservation Authority or NTCA), about 40% of forest cover has been degraded and 50,000 sq. km of tiger range area has been lost forever."

Consider this—90% of tigers are now squeezed into 10% of the entire habitat that’s supposed to be occupied by the animals. These 40 or so “source populations" are under threat and need to be ecologically monitored using intensive camera traps—automated devices that photograph animals in the wild and the images they record being used to arrive at an estimate of the number.

“The most serious flaw in the government’s effort is the futility of generating an all-India tiger count every four years, while ignoring the critical task of intensively monitoring key source populations year after year," says K. Ullas Karanth, senior scientist, Wildlife Conservation Society and director of the Centre for Wildlife Studies.

The estimation process itself came under scrutiny when 300 out of 500 camera traps used across the country malfunctioned. They were replaced but skepticism over the method has not abated.

Nitin Desai of the Wildlife Protection Society of India (WPSI) criticizes the extrapolation theory on which camera trap numbers are based. Tiger numbers in a particular area are tabulated with the use of the devices—this is then used to determine how many of them occupy an identical area nearby.

The numbers, he says, can be deceptive. The major concern should instead be the estimation of tiger populations in non-protected areas and the enforcement that’s needed to conserve them.

“The count has simply gone up because the area covered during the second estimation is more than double what was covered in 2006," Desai adds.

Karanth is skeptical about the trend indicated by the figures.

“Since various threats faced by tigers do not appear to have diminished in the last four years, it is difficult to explain the claimed reversal of the decline of tigers,"he says. “It is not possible to give an opinion on the new numbers without a detailed report."

More will be lost. Large parts of the Panna tiger reserve will be submerged with the Ken-Betwa river linking project; ongoing power projects in Bhutan will destroy most of the Buxa tiger reserve as well as the Manas tiger reserve; the forest corridors between Kanha-Nagzira-Pench, Tadoba-Melghat and Navegaon-Nagzira are under threat from road widening, mining and power projects; irrigation projects in Jharkhand are damaging whatever remains of the wildlife habitats of the state; and hydropower projects in Arunachal Pradesh are threatening the rich biodiversity of the North-East.

“Close to 30% of the estimated tiger population is still outside the 39 tiger reserves and there is no strategy to deal with the situation," Jairam Ramesh, former environment minister, said when the March numbers were announced.

There is another disturbing trend that hasn’t been arrested. In 1989, there were 1,327 tigers inside protected areas and 3,000 outside them. In 2001, there were 1,500 inside and 2,000 outside. While the numbers inside the protected area network have remained more or less the same, the rest dropped because of poaching and human-wildlife conflict. The data released on Thursday shows that this slide hasn’t been turned back.

The biggest threat to the tiger comes from fragmented and rapidly shrinking corridors between protected areas (PAs). Young tigers have nowhere to disperse when looking for a home range/territory and are forced to traverse long distances. The government appears to have thrown up its hands in this regard, perhaps deferring to the development imperative.

“We cannot have a policy to safeguard forest corridors," Ramesh said earlier during his tenure as environment minister.

That’s forcing the tiger to expose itself and others to more dangers than the jungle usually has to offer. On 1 May, a young tiger was captured after it attacked three people in the Shikaripur Taluk of Shimoga district in Karnataka. When scientists under Karanth examined the stripe pattern on the tiger it was found to have been camera-trapped in the Gundre area of Bandipur tiger reserve on 18 February the previous year. GPS maps revealed that the tiger had travelled more than 280km in more than a year, during which it passed through corridors and survived poaching and human-animal conflict. “This is the longest scientifically-recorded wild tiger dispersal to be ever recorded," Karanth says. The animal was later released in the Bhadra tiger reserve.

It’s not all bad news. The southern Western Ghats and the Nilgiris-Eastern Ghats forest cover remain the best areas for tiger conservation in India. A large network of protected areas in this region—the Nagarhole tiger reserve, the Bandipur tiger reserve, the Mudumalai tiger reserve, the Wayanad wildlife sanctuary, the BRT sanctuary and the Silent Valley national park—have facilitated wildlife conservation, especially that of tigers. The population in the Western Ghats shows an impressive trend —an average of 534 tigers, of which the Sharavathi Valley-Anshi-Dandeli landscape houses 36-42 tigers. The Nagarhole-Mudumalai-Bandipur-Wayanad forest stretch has about 350-411 tigers in a 9,000 sq. km area, among the largest tiger population concentrations in India after Corbett.

“Karnataka is now the place with the maximum number of tigers," says P.R. Sinha, director of the Wildlife Institute of India (WII). Previously, this accolade went to central India, especially Madhya Pradesh.

While the focus of conservation efforts has always been on tiger reserves, the reserve forests (RFs) adjoining them have not been paid as much attention. These reserve forests, which play a significant role in species dispersal, have been neglected because of their “lower" status relative to the tiger reserves. The protection infrastructure and management have also become run down, resulting in a decline in the quality of forest cover.

The conservation of reserve forests in the Sigur and Singara ranges of the Nilgiris north forest division extending down into the Moyar valley has brought positive results.

After nearly a decade-and-a half, tigers have reappeared in the Moyar valley and have been spotted in the Sigur and Singara ranges.

Bringing the Moyar region under the ambit of the tiger reserve will be a critical next step. NTCA has already written to the Tamil Nadu government seeking this.

This sort of country-wide effort to upgrade the enforcement and protection of habitat can make a start towards saving what remains of the tiger’s habitat. If there is enough forest cover, nothing can stop a rise in tiger numbers. Otherwise, this latest bump in the numbers may be the last bit of good news amid a decline that’s inevitable.