According to a study, India had 3.1% share of world military expenditure of the 15 states with the highest spending in 2015

India moved up one spot in the global rankings to reach the sixth position in 2015 for military spending, according to a study by the Stockholm International Peace Research Institute (SIPRI).

According to the study released on Tuesday, India had 3.1% share of world military expenditure of the 15 states with the highest spending in 2015. 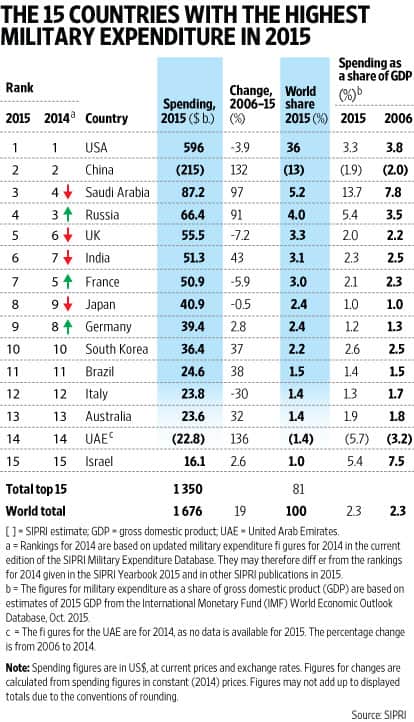 Military spending in Asia and Australia region rose by 5.4% in 2015 and by 64% between 2006 and 2015, reaching $436 billion in 2015 at current prices and exchange rates. Indian neighbour China had by far the highest military expenditure in the region: an estimated $215 billion, or 49% of regional spending. This was more than four times that of India, which was the region’s second-largest spender.

“India’s military spending in 2015 was $51.3 billion, an increase of 0.4%. India plans to increase military expenditure by about 8% (in real terms) in 2016, partly to fund many large ongoing and planned procurement programmes," SIPRI said.

However, another study by US research firm IHS Inc. had put India as the world’s fourth largest spender on defence, following a 13.1% increase in its 2016-17 defence budget.

India’s rise in the rankings from sixth position last year is a result of an increase in expenditure to $50.7 billion, combined with cuts to military spending by Russia and Saudi Arabia, where low oil prices have put considerable strain on their finances, IHS said in March end.

According to a report released by PricewaterhouseCoopers Pvt. Ltd and industry lobby group Assocham on 29 March in Goa, India ranks among the top 10 countries in the world in terms of its military expenditure and import of defence equipment and allocates about 1.8% of its gross domestic product to defence spending, of which 36% is assigned to capital acquisitions. However, only about 35% of defence equipment is manufactured in India, mainly by public sector units.

Moreover, even when defence products are made locally, there is a large import component of raw material at both the system and sub-system levels.

Prime Minister Narendra Modi launched the Make in India campaign in 2014 with the objective of boosting manufacturing and generating employment by focusing on 25 sectors, including defence.

World military expenditure rose by 1% in 2015. This was the first increase in military spending since 2011, reflecting continuing growth in Asia and Oceania, Central and Eastern Europe, and some Middle Eastern states, according to SIPRI. 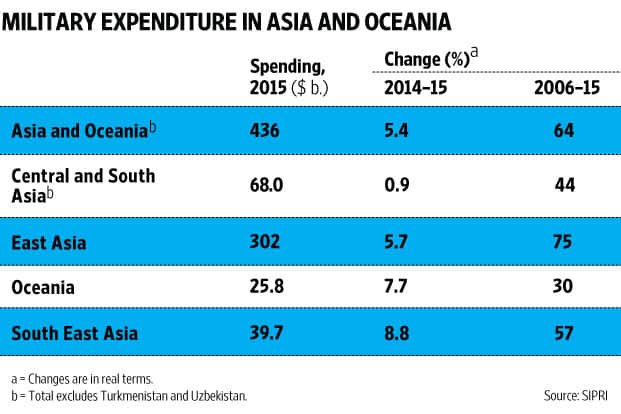 “The decline in spending in the West is also levelling off. At the same time, spending decreased in Africa, and Latin America and the Caribbean. Thus, the global military expenditure picture is mixed," it said.

A combination of high oil prices and new oil discoveries and exploitation has contributed to a surge in military spending in many countries around the world in the past decade, SIPRI said. However, the crash in oil prices that started in 2014 has begun to reverse this trend in many oil revenue-dependent countries. Further cuts in spending are expected in 2016, it cautioned.

The most dramatic oil revenue-related reductions in spending in 2015 were in Venezuela (64%) and Angola (42%). Decreases were also recorded in, among others, Bahrain, Brunei, Chad, Ecuador, Kazakhstan, Oman and South Sudan.

Despite declining oil revenues, several other oil-exporting countries continued to increase military spending in 2015. Many of these countries—notably Algeria, Azerbaijan, Russia, Saudi Arabia and Vietnam—were involved in conflict or faced heightening regional tensions. However, Russia’s expenditure was lower than projected in its budget, and Saudi Arabia’s spending would have fallen but for the additional $5.3 billion cost of its military intervention in Yemen. Russia and Saudi Arabia are planning cuts in 2016.