Krishnapatnam Port gets Rs4,000 cr for next phase

Krishnapatnam Port gets Rs4,000 cr for next phase

Hyderabad: The developer and operator of an all-weather, deep-water port in Andhra Pradesh, Krishnapatnam Port Co. Ltd (KPCL), says it has achieved financial closure (or arranged finances) for the Rs4,000 crore second phase of the project.

KPCL is constructing the port in three phases at Krishnapatnam in Nellore district of the state. The first phase, built at a cost of Rs1,400 crore, had commenced operations in July last year. The developer said it has tied up Rs3,500 crore of debt at 11% interest from a consortium of banks led by the nation’s biggest lender, State Bank of India. On 24 February, KPCL had sold a minority stake in the port company to global private equity firm 3i Group Plc. for Rs800 crore. The size of the stake wasn’t disclosed. 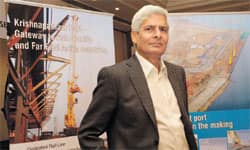 The first phase of KPCL’s port project has a cargo handling capacity of 25 million tonnes (mt) a year. The company plans to add 40mt of capacity in the second phase, which is expected to be complete by January 2012. The port will handle 100mt of cargo every year when fully operational.

“The promoters and investors had already invested some Rs1,400 crore in the company, which will be sufficient for the next phase of expansion as well to take the port’s cargo handling capacity to 100mt by 2015," said KPCL chairman Chinta Visweswar Rao. “We are confident of generating adequate internal accruals to meet further expansions."

The second phase of expansion will take up total berths in the port to 12 from four now, where the company plans to reserve at least six berths for handling coal, leaving the rest for general, bulk and container cargo.

KPCL is upbeat that power projects with a total capacity of 10,000MW coming up in and around Krishnapatnam would import about 37mt of coal a year by 2013.

The company says it expects to achieve a revenue of Rs350 crore this fiscal year and Rs600 crore in the next fiscal. It is targeting revenues of Rs2,500 crore by 2013—the year when it hopes to break even.

India’s ports are projected to increase cargo handling capacity to 1,855mt by 2012 from about 758mt now, with an investment of about Rs1 trillion, as foreign trade expands. Private firms are expected to invest at least 65%, or Rs65,532 crore, of this amount, according to the Union shipping ministry.