Yogendra Yadav, Prashant Bhushan have been removed from all of the party's decision-making bodies

New Delhi: After expelling rebels from key party bodies and reconstituting top panels, the levers of power in the Aam Aadmi Party (AAP) are now firmly in the hands of Delhi chief minister and AAP national convener Arvind Kejriwal and those thought to be close to him.

A day after AAP founding members Yogendra Yadav and Prashant Bhushan were ejected from the national executive at a national council meeting described by the rebel duo as “murder of democracy", the party executive dropped Bhushan from the disciplinary committee and reconstituted its internal ombudsman.

With this, Yadav and Bhushan, who criticized Kejriwal for violating the AAP’s founding principles of internal democracy, have been removed from all the executive decision-making bodies of the party.

Addressing the media after Sunday’s meeting of the executive committee, AAP national secretary Pankaj Gupta said, “The disciplinary committee has been reconstituted. It has three members—Dinesh Waghela as chairman, Ashish Khetan and Pankaj Gupta."

Former AAP lokpal, or ombudsman, Admiral L. Ramdas (retd), who had criticized the party for faltering on counts of transparency and accountability, was asked to stay away from Saturday’s national council meeting by Gupta, according to a letter by Ramdas. 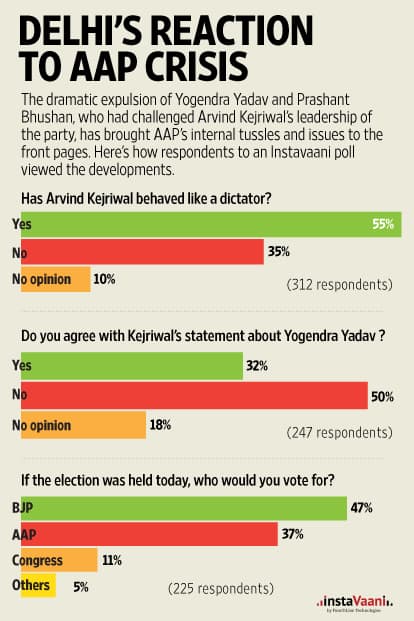 The new lokpal panel does not include Ramdas.

According to AAP’s constitution, the lokpal has a maximum of three members who retire, one person at a time, after a year.

The party also released a video of Kejriwal speaking at Saturday’s meeting, which was not open to the media.

In the video, Kejriwal says, “I have not come here to fight with Yogendra Yadav and Prashant Bhushan. I concede defeat today. You have won. I have come to end this fight today. Today, you will have to decide. In the last one year, there has been a fight in every national executive meeting. There was shouting and screaming in every meeting of the PAC (political affairs committee). This is not inner party democracy, swaraj."

He adds that the national council members should choose between him and Yadav and Bhushan.

An analyst said the party’s leadership coalescing around Kejriwal was something that was inevitable and may give the two-year-old party a fresh start.

“Most political parties in India, given the sort of heterogeneity we have, are ultimately led by one leader. Leadership has to be more centralized. This was inevitable. Much like most of the other parties, that are also led by a single leader. This has given AAP a clean slate to start with and will have no impact on the future course," said Jai Mrug, a Mumbai-based political analyst.

“For a leader to be able to function according to his vision, there needs to be minimum dissent," Mrug added.

While top lawyer Bhushan helped the party expose corruption by taking on industrialists and senior leaders of other parties, including the Bharatiya Janata Party (BJP) and the Congress party, Yadav, a psephologist, worked closely in formulating the AAP’s political line.

“Yogendra Yadav was a good strategist and certainly helpful to the party. Prashant Bhushan also added to the party with his intellectual acumen," Mrug said.

The national council’s decision to expel Bhushan and Yadav, along with Anand Kumar and Ajit Jha, sparked the resignation of social activist Medha Patkar from the party. Patkar had contested the Lok Sabha elections from Mumbai North East on an AAP ticket.

AAP formed a government in Delhi by winning 67 of the 70 assembly seats in February. Since the stunning victory, the party has been rocked by multiple controversies.

Issues of transparency and democracy within the party, which rode to success on a platform of decentralized power, have haunted the party since coming to power.