Antony sought probe into trucks in 2009

Antony sought probe into trucks in 2009

New Delhi: Defence minister A.K. Antony sought an inquiry into alleged irregularities in a deal to buy trucks for the army as far back as in 2009, the government said Friday.

The minister said earlier this week that he hadn’t acted when army chief V.K. Singh told him he had been offered a bribe to clear the purchase of substandard vehicles for the army because there had been no written complaint by the general.

The defence ministry, in a statement, said that in October 2009, Antony had asked the defence production secretary to “look into the various issues" raised in a complaint against state-owned defence firm BEML Ltd, which has a collaboration with Tatra Vectra Motors Ltd, a joint venture between the UK-based Vectra Group and Czech firm Tatra Trucks. 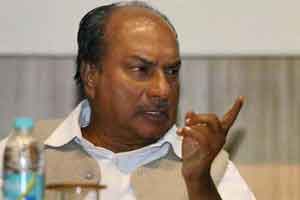 “Records show the vigilance wings of defence ministry and BEML are examining the matter and there are also correspondence between the CBI and chief vigilance officer of BEML on these allegations," the ministry said. “Meanwhile, the defence minister has accorded his sanction for a CBI investigation on 21 February 2012 in another case relating to BEML, much before a newspaper report was published on 26 March 2012."

DNA newspaper reported on Friday Antony was apprised of the matter in 2009, “but he turned a blind eye". Singh, in an interview to The Hindu, alleged that a retired general had offered him a bribe of Rs14 crore to clear the “substandard trucks".

On Friday, the Central Bureau of Investigation (CBI) registered a case against BEML and the Vectra Group for alleged irregularities in the supply of all-terrain trucks to the army.

CBI also named Ravi Rishi, chairman of the Vectra Group, in the FIR and conducted searches in New Delhi and Bangalore. It also questioned Rishi.

“It was alleged that unknown officials of a government defence PSU (public sector unit) entered into criminal conspiracy with one of the owners of a UK-based company having a name similar to a Czech company, which was a manufacturer of military trucks," CBI said.

The defence minister wants an inquiry into alleged irregularities in a deal for army trucks.

“The agreement...was fraudulently assigned to the said UK-based company," the statement said. “In this manner, vehicles worth thousands of crores have been supplied to Indian Army... Unknown officials of the defence PSU allowed change of currency from dollar to euro and further, by not levying the liquidated damages, thereby causing further loss of approximately 13.27 crore."

V.R.S. Natarajan, chairman of BEML, dismissed all allegations of corruption. “We never got complaints about Tatra vehicles. That shows these vehicles are performing excellently," he told reporters in New Delhi.

Retired Brigadier and defence analyst Rumel Dahiya said the allegations “essentially revolve around over-pricing... Ideally after over two decades, there should have been technology transfer by now, and the costs would have come down".