Mumbai: When one thinks of ill-health in India, one typically associates it with poor states with a history of poor health outcomes such as Madhya Pradesh or Jharkhand.

So, you may be surprised to know that the highest proportion of people reporting illnesses last year was in the state of Kerala, widely considered to be an epitome of attainment in human development outcomes. Tamil Nadu, another vaunted welfare state, ranks just four notches below Kerala in that list, according to the recently published results of a national survey on health conducted by the National Sample Survey Office (NSSO) in the first half of 2014. As the chart shows, with 31% people reporting some kind of illness (in the 15 days immediately prior to the survey), Kerala topped the list of states with most reported cases of illnesses. States such as Madhya Pradesh and Jharkhand, widely identified with poor health outcomes, had the lowest proportion of people reporting illnesses among the 20 most populous states of India. A look at the hospitalization rates suggests the same broad pattern, as the next chart illustrates. 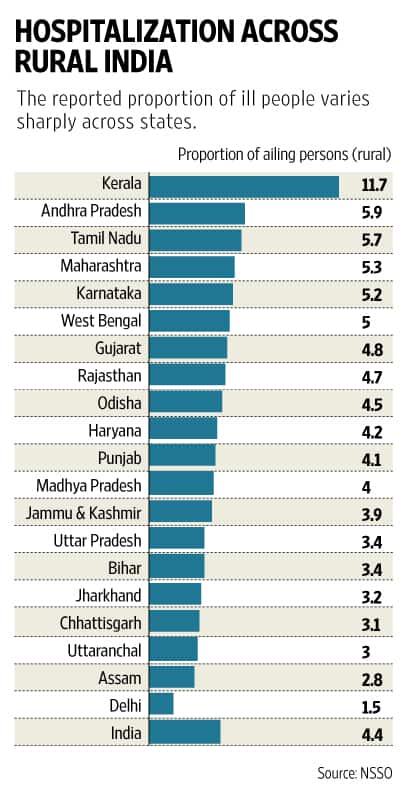 Seen in isolation, and taken at face value, the data seems to suggest that states such as Kerala and Tamil Nadu are among India’s unhealthiest states, while people in states such as Madhya Pradesh, Jharkhand and Assam are brimming with health. But when seen with other correlates of health such as the access to healthcare, or the level of infant mortality rates, it becomes clear that the numbers are grossly distorted by a reporting effect. In a 1990 New York Review of Books article (mintne.ws/1P6ozUe) the Nobel-winning economist Amartya Sen famously coined the term “missing women" to refer to victims of gender bias. Across the developing world, the preference for sons leads to lower survival rates for girls. The low sex ratio of countries such as China and India indicated that millions of women were “missing" from the world, Sen pointed out.

A look at the latest figures on persons reporting illnesses across Indian states seems to suggest that millions of ill persons have been missed by the official count. Even if one considers Kerala an outlier because of its large aged population, who tend to be sick more often than others, there is still a large reporting gap between a state such as Tamil Nadu and a state such as Madhya Pradesh.

The NSSO report put the average figure for people reporting illnesses in rural India at 8.9%. But if one assumes that the true extent of under-reporting is the difference between the national average and that between the top five states in terms of reported illnesses (excluding Kerala, given that it is likely to be an outlier), the true national average will then be 15.6%. In other words, 6.7% of the rural population, or roughly 55 million people, is missing from the official estimate of the ill.

The same factors that lead to under-reporting of illnesses also lead to low hospitalization in many of the laggard states. In addition, substantially high costs of treatment and lack of faith in the public health care system make many people shun the formal healthcare system even when they fall seriously ill. While the latest survey does not provide any data on this, according to the 2004 health survey conducted by NSSO, 28% of those who did not seek treatment despite being ill did so because of financial constraints.

Well-funded health systems can, however, attract more patients, the data shows. As the next chart shows, several states that rank high on per capita expenditure on medical and public health also rank high in terms of hospitalization rates. Other than outliers such as Jammu and Kashmir and Delhi, most states that rank high in terms of health spending also rank high in terms of hospitalization rates. Similarly, most states that rank low in terms of health spending also have lower rates of hospitalization. Not only do people in states such as Assam and Jharkand under-report illnesses, they seem to avoid visiting hospitals because of lack of access to decent healthcare facilities.

The extent of under-reporting in even basic illnesses indicates how far the country has to move on the path to good health. It is an old adage that the first step in dealing with a problem is to acknowledge it. The first steps towards India’s progress in healthcare should be measured in terms of the increase in reported illnesses. Between 2004 and 2014, that figure (of those reporting illnesses) has gone up by nearly 2 percentage points to 11.8% in urban India, according to NSSO data. In rural India, the same ratio has remained nearly unchanged despite a significant increase in public funding for rural health infrastructure over the past decade.

This is the first of a two-part data journalism series on India’s healthcare crisis. The second part will examine the rise in healthcare costs in the country.