New Delhi: The auction of second-generation (2G) spectrum is likely to begin in November, a delay of at least two months beyond the deadline set by the Supreme Court for its completion, raising concerns of more uncertainty among telecom companies. 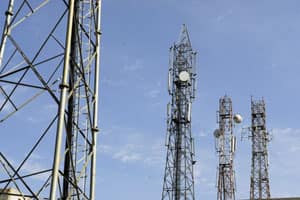 The auction should start by early November, the official said on condition of anonymity, adding that the schedule will be finalized in consultation with the auctioneer. On Monday, DoT picked Gurgaon-based Times Internet Ltd to carry out the auction.

The eGoM also decided that DoT will move a petition in the Supreme Court next week seeking an extension of the 31 August deadline set by the court for the conclusion of the auction.

On 2 February, the Supreme Court ordered the cancellation of 122 telecom licences and 2G spectrum given to nine companies in 2008, ruling that the allotment process was flawed. The court called for an auction of the spectrum by 2 June. The deadline was later extended to 31 August, with the companies given time till 7 September to wind up their operations. 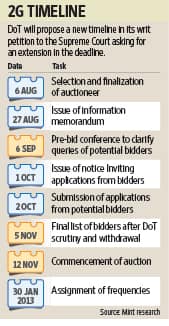 The reserve price, though 22% lower than what was recommended by the telecom regulator, has still come under severe criticism. Telecom industry lobby group Cellular Operators Association of India on Monday said the price was too high and would result in an increase of 37-49 paise per minute in call tariffs.

The eGoM has already decided on the quantum of spectrum to be auctioned; it has also decided to allow winning bidders to mortgage spectrum with banks. DoT officials said the Reserve Bank of India had permitted banks to finance telecom companies bidding for the spectrum, subject to certain conditions.

Some analysts and telecom companies expressed apprehensions over the new timeline.

“A lot depends on the legal challenges to auction terms in the interim—liberalization, quantity, reserve price and ongoing dual tech case in the Supreme Court. Ultimately, the Supreme Court is going to drive the whole process, as the government has not been able to balance the interests of various telcos," a Mumbai-based telecom analyst said on condition of anonymity.

“Due to the prevailing regulatory and legal uncertainties, Sistema Shyam TeleServices Ltd (SSTL) is losing approximately ₹ 7 crore per day. With the auction timelines getting further delayed, it is bound to add to the losses of the company," said Vsevolod Rozanov, chief executive officer of SSTL, on the delay in the auction.

“From media reports, we understand that the government plans to seek an extension of the auction timelines," said a statement by Norwegian phone company Telenor ASA. “Such delays are a matter of concern to us as they prolong the uncertainties we face. We urge the government to conclude the auction process at the earliest."

“The price of $509 million per MHz in the 2G bandwidth (1800Mhz), which is used essentially for voice and text, is one of the most expensive in Asia-Pacific. The 2G spectrum is offered at a nominal price, or with no upfront fees on a ‘first come, first served’ basis, by Indonesia, the Philippines, Thailand and South Korea," the Fitch report dated 7 August said.

Fitch further said that it was unlikely that many of the telcos that lost their licences would bid in the coming auction and that the Indian telecom sector could afford six profit-making operators at the very most.

“The three smaller operators —Etisalat, Videocon and Swan Telecom—have already exited the industry. The Indian subsidiaries of Telenor and Sistema are most likely to pull out either completely or in part. The fifth and sixth largest private operators (subsidiaries of Tata and Maxis) may also look to consolidate to strengthen their position, as both operators have been unable to register an operating profit so far," the Fitch report said.

Not all analysts were unhappy with the government decisions.

“The 10MHz spectrum being made available is adequate from the demand-supply perspective and should help keep a check on bidding intensity. This quantum is sufficient assuming Idea bids for its cancelled licences, Uninor bids only for circles it plans to continue in, and one new operator bids pan-India," Gaurav Malhotra, an analyst with Citi Global Research, said in a 6 August report.