All of Indian e-commerce's biggest names, including Flipkart and Snapdeal, figure in the list, except Amazon India

The 21 websites were listed in a petition by an industry body that wanted the government to probe the violations of foreign investment laws.

All of e-commerce’s biggest names, including Flipkart Ltd and Snapdeal.com (run by Jasper Infotech Pvt. Ltd) figure in the list, which was filed by advocate Rishi Agrawala on behalf of All India Footwear Manufacturers and Retailers Association (AIFMRA) in July.

The only exception is Amazon.com Inc.’s local arm, which, Mint reported on 29 October, could also be violating the law of the land.

The move is likely to roil the e-commerce ecosystem in India, and raise questions on the viability of business models that tread the grey areas in laws, as well as the wisdom of investors who have pumped billions of dollars into such companies.

Delhi high court justice Rajiv Sahai Endlaw, before whom the plea was brought, was informed by the government that it has already begun an investigation of six e-commerce websites to establish if they had violated the FDI policy.

“Instead of six, the government should expand their probe into all 21 e-commerce websites," said Sahai Endlaw.

The government was granted four weeks more to file a reply. 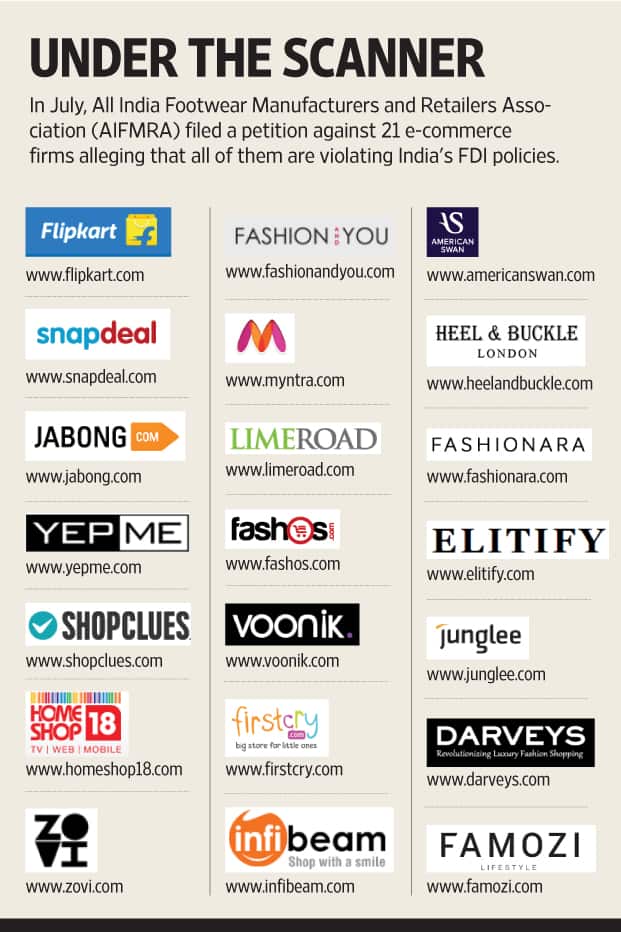 Since September, this is the second time the government has sought an extension to place the documents on record.

The government has already told the Enforcement Directorate (ED), which investigates violations in foreign exchange rules, and the Reserve Bank of India (RBI) to probe the six companies that have allegedly violated FDI norms, said a person close to the development on condition of anonymity.

The six names include Flipkart, which has been under the ED’s scanner since late 2012 for alleged violations of FDI rules. The status of the investigation is unclear.

Flipkart declined comment.
A Snapdeal spokesperson said in an email response: “Snapdeal provides a technology platform that connects sellers to buyers. Its activities are in compliance with the laws of the land."

Almost all Indian e-commerce websites tout themselves as marketplaces although a few of them have strong and significant relationships with the biggest sellers on their platforms.

India doesn’t allow FDI in so-called multi-brand retail, offline or online. Offline retailers have all along alleged that under the garb of being marketplaces, many e-commerce websites are selling directly to consumers.

While seeking parity in FDI norms, the footwear association had sought probe into the working of various e-commerce websites offering footwear for sale and action against them for violation of FDI norms.

Over the last few years, retailers have been fighting for a single FDI policy that’s applicable to all.

Earlier, Retailers Association of India (RAI), a body representing more than 1,000 retailers, including Shoppers Stop and the Future Group, had in May approached the Delhi high court seeking a level playing field in terms of FDI. The court had then directed the government to consider their representation and take a decision within four months.

The commerce ministry has been holding discussions with states (some of them have run into issues with e-commerce companies over tax), traditional retailers, as well as e-commerce firms to decide on definitions of terms such as marketplace, B2C, and B2B, and to also come up with consistent laws for foreign investment in retail in India.

The definitions are expected shortly.