Food inflation declined to 3.52% in September from 5.15% a month ago, driven by a 15% fall in vegetable prices

The Wholesale Price Index (WPI)-based inflation eased to 2.38% in September, the slowest pace in 59 months, from 3.74% a month ago. Retail price inflation slowed to its lowest level since the series was launched in January 2012, at 6.46% in September, compared with 7.73% in August, according to data released on Monday.

The wholesale price inflation data released on Tuesday showed food inflation declined to 3.52% in September from 5.15% a month ago, driven by a 15% fall in vegetable prices.

“It is heartening to note that we have been able to bring food inflation under control. We are committed to continuing reforms in food markets that will improve supply responses and keep inflation low and stable," finance minister Arun Jaitley said. “At the same time, fiscal consolidation and a new monetary policy framework will help bring down inflationary expectations. We are confident that soon we will be achieving a low and stable inflation rate."

India’s trade deficit widened to a 16-month high in September as merchandise imports grew at a faster clip on account of an abrupt jump in the imports of gold and electronic goods, data released separately by the commerce ministry showed, while exports continued to grow at a low single-digit level, again highlighting the poor state of manufacturing growth.

Factory output rose at a meagre 0.4% in August, unchanged from July, illustrating the magnitude of the challenge the new government confronts in reviving the country’s economic engine.

The continuing decline in crude oil prices may cause a further fall in wholesale as well as retail inflation.

The international crude oil price of the Indian basket as computed by the Petroleum Planning and Analysis Cell was $88.23 per barrel on 10 October, compared with $90.50 per barrel on the previous publishing day of 9 October, the oil ministry said in a statement on Monday. 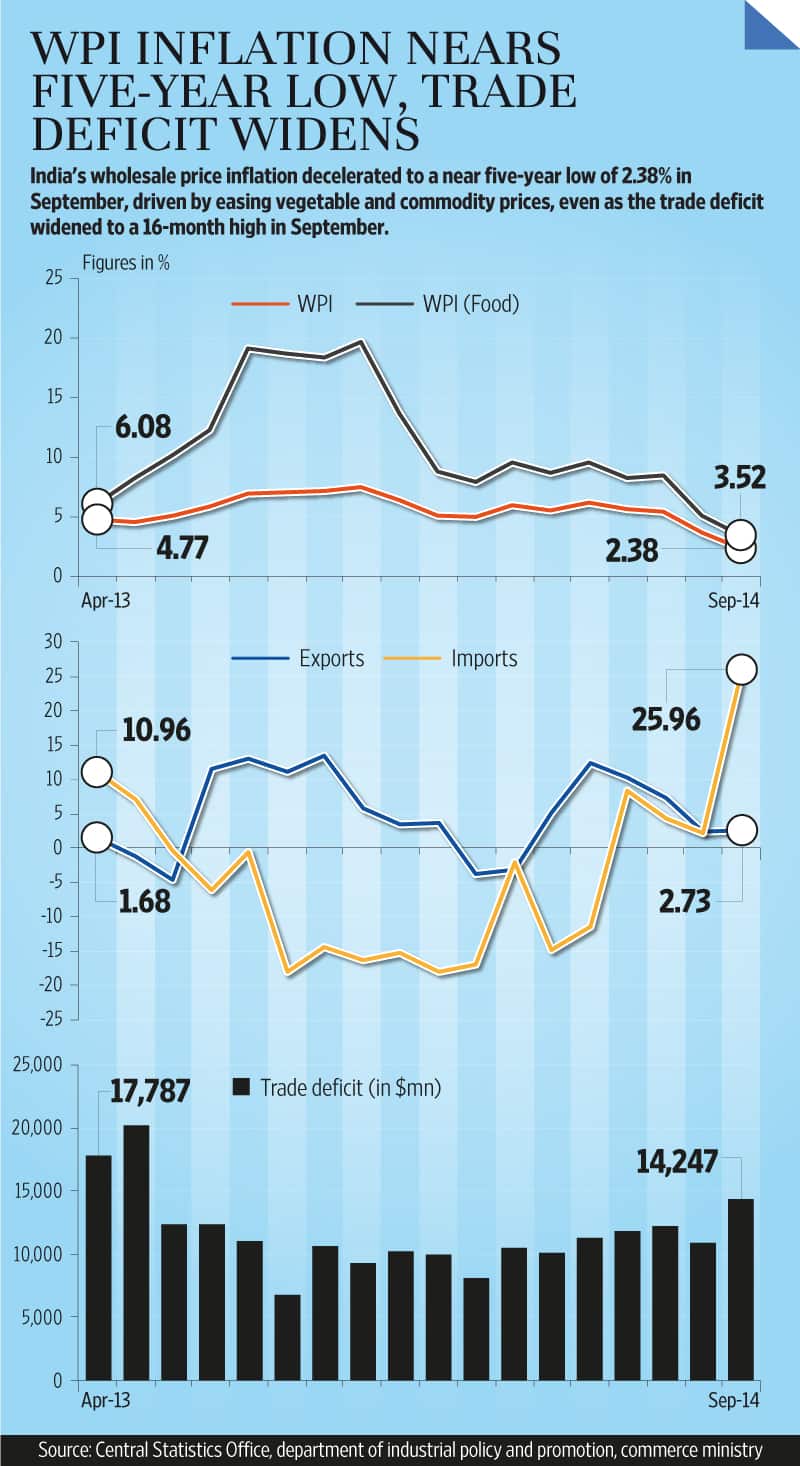 Oil prices could also turn out to be lower than expected because of increased oil supply or lower demand, the IMF said. The fund projected crude oil prices to average $102.8 a barrel in 2014 (down 1.3% from 2013), falling to $99.4 in 2015 and to $97.3 in 2016. “This pattern is consistent with strong increases in non-Opec (Organization of the Petroleum Exporting Countries) production."

Supported by benign global commodity prices, momentum in fuel and manufactured inflation weakened in September, said Garima Kapoor, economist at Yes Bank Ltd. However, Kapoor said she continues to expect RBI to maintain a prolonged pause in 2014-15 and cut rates only when there is unambiguous visibility of inflation trending closer to the January 2016 target of 6%.

“With reasonable likelihood, we expect the above-mentioned structural factors to continue to provide gradual disinflationary impulses, thereby providing some space for monetary easing in April-September 2015-16," she said.

While RBI maintains its view of an upside risk to its 6% Consumer Price Index (CPI) target, Rohini Malkani, economist at Citigroup India, said in a report that the upside risks had subsided materially given the benign outlook on global commodities, stable trends in rupee, a drop in core CPI momentum, and continued supply-side efforts to contain food inflation. “As a result, we reiterate our view that the window to ease rates could open up in 2015," Malkani said.

“Reducing the supply-demand gap in agriculture production in the long run and improving supply logistics will be of utmost importance for moderating food price pressures and for sustaining the pace of economic activity by securing adequate food availability at reasonable prices," the central bank said.