Though it trails TMC, BJP won more than a third of gram panchayat seats in Purulia, Jhargram districts

Kolkata: For a year-and-a-half, West Bengal chief minister Mamata Banerjee has been trying to gather all regional parties to fight the Bharatiya Janata Party (BJP) from a common platform in next year’s general election.

She has said several times that ideally, in every seat, the strongest among the forces opposed to the BJP should take on the saffron party, with backing from the others.

Ironically, in some districts of her own state, she herself is on the receiving end of such a bipolar contest, and the gainer is the BJP, which has firmly established itself as the main opposition party in West Bengal. 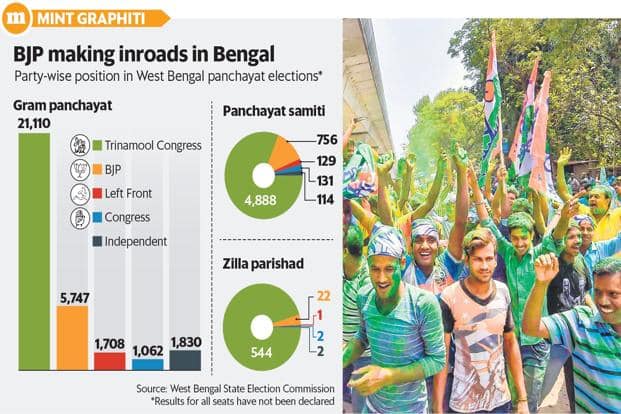 The panchayat election concluded last week showed that the BJP has made strong inroads into former Maoist bastions—districts such as Purulia and Jhargram.

Though it trails the Trinamool Congress in both, the party has won more than a third of the gram panchayat seats in these two districts with the backing of the tribal population, according to Biswanath Chakraborty, a professor of political science at Kolkata’s Rabindra Bharati University and an election analyst.

As a community, tribal people don’t take kindly to “betrayal", Chakraborty said. If they know that the government is offering 5kg of subsidized rice per family, and they are receiving only 2kg, they see it as a “breach of trust", according to Chakraborty. “Tribal households do not reflect the story of development that the Trinamool Congress tells all the time," he added.

Churamani Mahato, a Trinamool Congress legislator from Jhargram and a minister for backward class welfare admitted that he couldn’t sell the story of development in his own backyard.

Banerjee herself has said that for the first time, all forces opposed to the Trinamool Congress, including the Maoist outfits, had ganged up. And surprisingly, they appear to have backed the BJP in these districts. The party won 644 of the 1,944 gram panchayat seats in Purulia, and 329 of the 806 seats in Jhargram.

Dissent started to take root in these districts when the administration started to rehabilitate surrendered Maoists, said Sukhamay Satpati, the BJP’s district president in Jhargram.

“Suddenly, people who have fought against the Left Front’s atrocities were being dumped, and former Maoists were being handed new lives," said Satpati, who has over the past two years reached out to voters “in every single booth".

Satpati said he had chosen the slow grinding game to build the BJP’s support base in the region. And this election has given him quite a head start, ahead of next year’s general election.

That implies going into next year’s general election, one of Banerjee’s key challenges will be to hold her own party together.

Collective resistance in some of the tribal regions of Jhargram and Purulia was so high that the Trinamool Congress itself could not field candidates in some seats, and in many more, it was not able to campaign, a leader of the party from the region said, asking not to be named.

The tribal population turned to the BJP or fielded independent candidates, he added.