Rohtak / Hisar / Sirsa: Gurgaon, the mother lode of Haryana’s exchequer, is turning into a symbol of resentment among the youth of one of India’s richest states: many of them do not have skills for white-collar jobs, triggering a clamour among politicians for job reservations for local people.

Haryana goes to polls on Tuesday.

A combination of economic lopsidedness, social pressure on the young to search for white-collar jobs and the state’s historical under-investment in human capital threaten to harm Gurgaon’s growth over time.

The threat is compounded by the fact that Gurgaon and Faridabad—on the southern tip of Haryana and on the outskirts of New Delhi—contribute most to the state’s revenue, but political and decision-making powers lie in other regions.

“We have promised 80% job reservation for the youths of Haryana in our manifesto," said Kuldeep Bishnoi, chief of Haryana Janhit Congress (HJC), who was Congress’ member of Parliament (MP) in the last Lok Sabha. “We can no more allow industries in Faridabad and Gurgaon, using our power and water, to feed youths from other states, leaving our ones jobless."

The Indian National Lok Dal (INLD) has promised 50% reservation for local youth and even a national party, such as the Bharatiya Janata Party (BJP), has asked for half the jobs to be reserved for locals.

The ruling Congress, which is expected to retain power with a reduced majority, has not promised reservation for locals in its election manifesto.

Partly responsible for those numbers is the boom in Gurgaon, home to several information technology (IT) and back-office services firms and headquarters of multinationals, and also to many employees of such firms.

A job in one such firm significantly increases the chances of a young man winning a bride, according to Ranjit Singh, former deputy chairman of Haryana planning commission, who is contesting from the Rania assembly seat in Sirsa district on a Congress ticket. “More than 50% of the state’s revenue comes from the district of Gurgaon alone. The imbalance is visible, but we (will) discuss these issues after the polls," Singh added.

Still, not everyone lands a job in an IT or back-office services company. Pramod Kumar is one such person. Last week, he was directing the residents of a lower middle-class neighbourhood in Hisar to the venue of a meeting of Haryana’s revenue minister Savitri Jindal, who is seeking re-election on a Congress ticket. 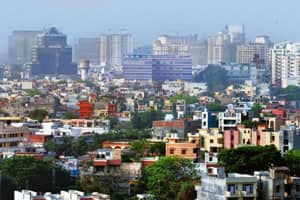 A view of residential and commercial buildings in Gurgaon. Sanjit Das / Bloomberg

In some ways, Kumar’s story reflects that of Haryana: industry is increasingly driving the economy of a state where ownership of land was traditionally valued over education or employment.

Vivek Kumar, a professor of sociology at New Delhi’s Jawaharlal Nehru University, who has carried out fieldwork in Haryana, is not surprised. “It is a feudal society where land has dominated the psyche," he said. Successive Haryana governments have clung to an illusion their society would remain largely agrarian, he added, explaining the under-investment in education.

This focus on land is also reflected in the state’s social indicators.

According to data published by economic research firm Indicus Analytics and based on research by the Reserve Bank of India, Haryana spent, on average, 4.2% of gross state domestic product on the social sector between 2003-04 and 2005-06, compared with a national average of 11% across states.

In 2003-04, Haryana’s share of expenditure on education to total disbursements in the state budget was 4.7%, compared with the national average of 5%.

The fallout of the inadequate investment in human capital is resentment against areas that provide the Haryana government with money needed to enhance it. Gradually Gurgaon, and to a lesser extent Faridabad, have begun to turn into lightning rods of the frustration of Haryana’s youth, which is articulated by politicians.

“Unemployment is a major issue and has worsened in the last five years of Congress rule. Our party has promised 50% job reservation for local youths. The state’s fate cannot be left to be decided in the hands of a few sitting in five-star hotels in Gurgaon and Delhi," Manish Grover, the BJP candidate from Rohtak, told Mint.

INLD’s MP Ajay Singh Chautala pointed out that the frustration eventually showed up in the form of a rising crime graph. “Joblessness has led to lawlessness in the state, with many taking to wrong ways of earning money," he said.