Caracas: Firefighters in Venezuela are battling flames at two storage tanks at the country’s largest refinery for a third day after a gas explosion on 25 August killed at least 39 people and injured dozens, shutting down the Amuay plant.

“There was no structural damage to the processing units at the facility about 240 miles west of Caracas, and production will resume within two days after the fires are out," oil minister Rafael Ramirez said on Sunday. Venezuela has four million barrels of inventories of gasoline and other petroleum products and continues to produce a total of 735,000 barrels of gasoline a day at plants, including nearby Cardon. 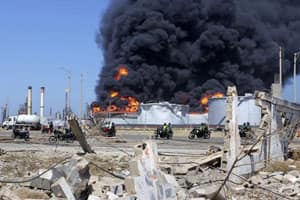 Fuel storage tanks are seen on fire, a day after an explosion at Amuay oil refinery in Punto Fijo in the Peninsula of Paraguana. Photo: Reuters

“It’s very early to draw any conclusions from the investigation because we haven’t even been able to reach the spot where the explosion occurred," Chavez said on state television in images showing black smoke from the burning storage tanks holding gasoline in the distance. “We have to tighten the security procedures to make sure this type of event doesn’t happen again."

Stella Lugo, governor of Falcon state in western Venezuela, described the early-morning blast as similar to an earthquake and said more than 200 homes near the refinery were damaged. Paraguana, which also includes the Cardon and Bajo Grande plants, is the world’s second biggest refinery complex.

Petroleos de Venezuela SA, as the state-owned oil producer is known, is the sole owner and operator of the refinery. The blast is among the world’s deadliest at an oil refinery. Fifteen workers were killed at BP Plc’s Texas City refinery in 2005, while more than 50 people died in a fire at Hindustan Petroleum Corp.’s refinery in Visakhapatnam in 1997.

“Strong winds have complicated efforts to put out the remaining flames, which may take a maximum of two days," Jesus Luongo, general manager of the Paraguana refining complex said on state television. The national guard stationed at the refinery bore the brunt of the deaths, including 18 troops and 15 family members, according to vice-president Elias Jaua. Six bodies are unidentified. The official death toll may rise more after El Universal reported that two burn victims who were flown to a hospital in nearby Zulia state died on Sunday.

“Amuay, with the capacity to process 645,000 barrels of oil a day, was halted as a result of the explosion," Ramirez said. The Paraguana complex has a capacity of about 950,000 barrels a day, second in size to Reliance Industries Ltd’s Jamnagar refinery, according to data compiled by Bloomberg.