New Delhi: Who will be the next leader of the Lok Sabha, now that Pranab Mukherjee has become President of the country? The question is bothering not just the ruling Congress party but the opposition as well. While a small section of Congress leaders wants general secretary Rahul Gandhi be given the post, experts say it should go to an experienced senior minister who can make effective interventions as well as undertake floor management smoothly.

The post is significant as the embattled government, desperate to instill fresh life in the administration and revive the economy through new initiatives, is expected to have a tough time in the monsoon session of parliament beginning 8 August. 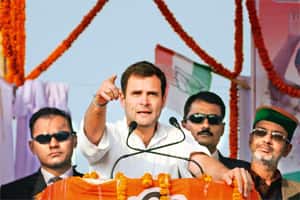 Replacement dilemma: Experts believe the opposition and other critics would always try to ‘expose’ Rahul Gandhi’s weaknesses and damage his prospects in the next general election. Photo: Pradeep Gaur/Mint

Although there is no restriction, experts say parliamentary propriety demands that the leader should be a person of considerable experience and expertise.

“Technically, it is for the ruling party to decide. If you go by established convention, the leader of the house should be the Prime Minister. There is no particular role defined for the post," said Subhash Kashyap, former Lok Sabha secretary general. “Conventions are anyway broken (when the Prime Minister chose to be a Rajya Sabha member) and it is fluid now." However, Kashyap said the question of propriety could be raised while nominating a relatively junior person to the post. “Propriety demands a senior and experienced person should be the leader."

Veteran journalist and political analyst T.V.R. Shenoy agreed. “A leader of the house should be a person well versed with rules and command respect from the entire house."

Pointing out that the Prime Minister of the largest democracy should have been a person directly elected by the people, Shenoy said it wouldn’t necessarily provide a greater or more active role for the Congress general secretary, who is considered the ruling party’s future prime ministerial candidate.

Although the 42-year-old Gandhi has been a member of the Lok Sabha since 2004 from Amethi, Uttar Pradesh, his performance has not been exemplary nor has been an active member, said N. Bhaskara Rao, a Delhi-based political analyst who has been observing the Congress party for almost four decades.

Gandhi seldom made any major interventions in the house, except in August 2011 when anti-graft activist Anna Hazare spearheaded a popular mass movement against corruption and dented the UPA government’s image.

“The sycophants in the Congress are misleading Rahul Gandhi. Rahul is not a good performer in Parliament, but he is good vote catcher. Congress should make use of him outside Parliament," Rao said, adding that the opposition and other critics would always try to “expose" his weaknesses and damage his prospects in the next general election.

Two Congress leaders, who spoke on the condition of anonymity, said Gandhi is not likely to take over the post of the Lok Sabha leader “unless he himself and the party leadership decides to make him deputy prime minister".

One of them said: “It will be a bad idea as the opposition will not let him function smoothly. It will damage the government’s chances of taking fresh initiatives as well as his prospects as a leader."

The leaders of the main opposition Bharatiya Janata Party chose not to react to the Congress MPs’ demand.

Sahil Makkar and Anuja contributed to this story.