New Delhi: India’s business schools, which expect to see a cooling in placement activity in the coming season in the wake of the global economic slowdown and the collapse of several investment banks that hired from at least some of them, are waking up to the prospect of a sharp fall in revenue from management development programmes or MDPs, because of the same reason.

Revenue from MDPs, typically targeted at companies, has grown significantly in past years but officials at B-schools admit that this would be lower or, at best, the same this year. In an attempt to cope with the slowdown, firms are cutting overall spending on training their executives at B-school courses for professionals. 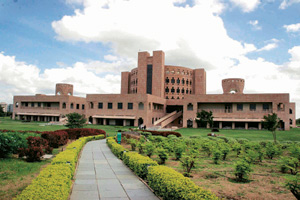 Changing course: The Indian School of Business, Hyderabad. At ISB, the focus of management development programmes has shifted from general topics to specifics such as mergers and acquisitions. Bharatha Sai / Mint

IIM Lucknow was more forthcoming. Its revenue from MDPs was Rs5.46 crore till September this year, against last year’s Rs9.49 crore. Abhishek Nirjar, chairperson (MDPs) and strategic management group at IIM-L said the figures dipped because the State Bank of India withdrew from the programmes this year. “We trained about 500 executives from SBI last year. This would have translated to more revenue if they hadn’t backed out."

The International Management Institute (IMI) in New Delhi, has seen a 20% decline in revenue from MDPs. And the Institute of Management Technology in Ghaziabad (IMT), another prominent B-school, has seen a 30% decline.

C.S. Venkata Ratnam, director of IMI said: “Several companies in the retail, oil and steel sector have either deferred or cancelled programmes pledged...earlier."

Generic programmes targeted at executives appear to have been hit more than company-specific MDPs.

Gurgaon-based Management Development Institute (MDI) held eight such open programmes till November, compared with 15 last year. IIM-L conducted 17 open MDPs till September, less than half the number (39) last year. And at IMI, two out of 10 open MDPs had to be cancelled after companies in the retail business backed out, according to Ratnam. “We even saw in-company programmes being deferred or cancelled if they involved travel and long stay."

While in-company programmes (targeting a specific company) at IIM-L have not been hurt, the number of open MDPs has declined to 17 from 39 last year.

MDI has seen a cut in both. In-company programmes are down to 80 this year till November, against 111 last year. Open courses, at eight, are almost half from 15 last year.

R.S. Mann, chairperson (MDPs) at MDI, said the best season for MDPs is yet to come. “We see maximum business in December as far as MDPs are concerned. These are just figures till last month."

Attendance at these programmes is also declining. Attendance for MDI’s open programmes was 40% of that seen last year; for in-company programmes, it was 66%.

At IIM-L, too, 2163 executives attended MDPs last year compared with 701 till October. “We expect this to grow to 1,800 this year but it would still not match last year’s numbers," Nirjar said.

Deepak Chandra, executive dean (executive programmes) at Hyderabad-based Indian School of Business (ISB) said, “serious players" would persist with MDPs as a way to sustain growth in recession. “Companies which might be using education as an activity to engage in when there is extra money—they might effect some kind of a cut. But serious players who see education as a key tool to development will stick to MDPs."

At ISB, where the number of executive education programmes has more than doubled between 2003 and 2008, the focus has shifted from general topics to specifics, such as mergers and acquisitions, and leadership in troubled times.

“Traditionally, travelling, marketing and educational training get affected but what matters is how you respond to this kind of economic activity. What we are doing is build closer relationships with companies through various platforms such as networking and learning. Custom-designed programmes also attract serious companies who see opportunities in recession,’’ Chandra said, citing the example of a corporate sector bank which is at ISB to train its core group of executives in mergers and acquisitions.

Many schools, including ISB said they may not launch any new MDPs this year.

“Now, the focus is shifting towards specific programmes. In the last three-six months, we have seen companies making careful selection of programmes. While our nominations are not affected, it might be difficult for us to introduce new MDPs as some companies might not nominate (people for) new ones,’’ Ashraf Rizvi, chairperson (MDPs) at IIM Indore said.