India is likely to see its waste generation triple to 376,639 tonnes per day by 2025. The solution to managing this could lie in segregating the waste.

New Delhi: Sheetal Pawar, a housewife who lives in the Katraj ward, or prabhag as it is known locally, of Pune, began segregating the waste generated by her household into dry (or inorganic) and wet (organic) waste two years ago. It was part of a pilot initiated jointly by four organizations in Pune to move towards zero waste developed on the philosophy of recycling garbage—a practice already in vogue in metropolises like New York and London.

According to Pawar it was not a difficult practice to weave into her daily routine; while the organic waste including vegetable peel, egg shells and leftover food is deposited in a green coloured bin, all the inorganic waste like paper, plastic and aluminium are placed in a white bin.

The waste collected from each home is no longer dumped in a landfill. Instead, they are diverted as raw material for biogas, composting and waste-to-energy plants, resulting in attendant savings besides reduction in the volume of household waste.

“We have been able to save ₹ 60,000-70,000 on transportation costs per month as all the waste does not got to the landfill. Also, we save ₹ 6. 57 lakh on electricity costs for street lights per biogas plant," says Su 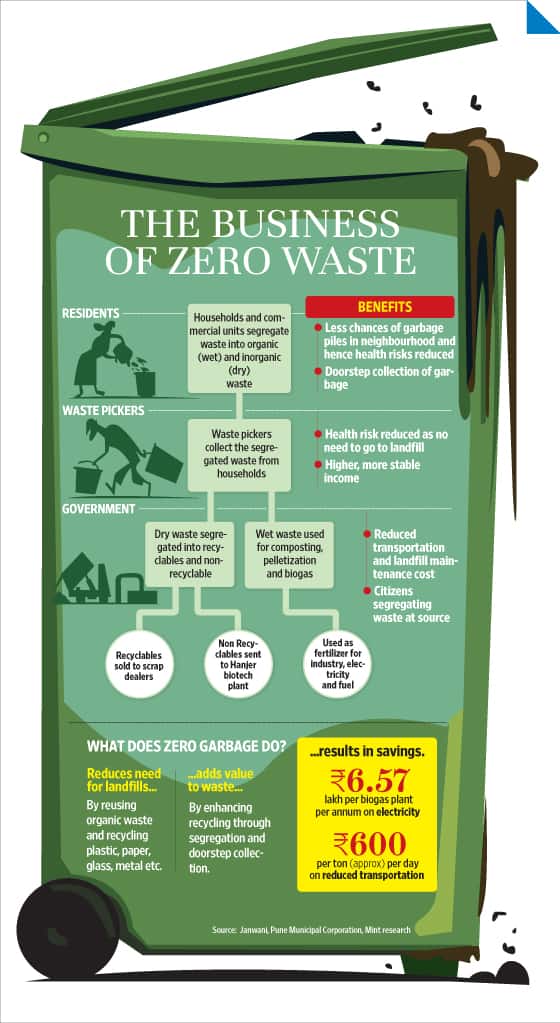 Naim Keruwala, project consultant at Janwani, a not-for-profit, one of the organization involved in the implementation of the Katraj initiative, said the pilot was started as there was an outcry in the villages adjoining the landfills.

“There were protests by local villagers who didn’t want a landfill which brings the waste from the city to their area," he said.

Pune is not the only city where people living near a landfill site have protested, said Ravi Agarwal, founder and director of Toxics Link, a not-for-profit group that works on waste issues.

“There have been attempts by small groups in cities like Chennai, Bangalore and Delhi to segregate waste and to convert biodegradable waste into compost and to recycle the non-biodegradable," he said.

Agarwal said none of them have been able to scale this model beyond a few wards or localities as it is in direct conflict with the privatization of waste, which is what the governments are promoting.

“Municipalities want to control plastic and waste and there is no support for these projects. They do not fail because of design but because the government doesn’t support them. Despite several attempts, these projects have failed as the municipal corporation has to support it for it to work," he said.

Keruwala said that zero garbage doesn’t mean that garbage is not created; all it means is that it is utilized in the same area. According to him, the key to its success is the fact that it is beneficial for all the stakeholders including wastepickers, the municipality and the households.

“A wastepicker is roughly able to earn ₹ 4,000-5,000 a month as each household pays ₹ 30 to a wastepicker per month to collect segregated waste from their houses," he said. This includes the money they earn from selling the the inorganic waste like plastic, paper and aluminium to recycling units, Keruwala adds.

According to Agarwal, the pilot in Pune was a success because the municipal corporation backed the plan. “All that this kind of a project requires is institutional support," he adds.