Will recession become something worse?

Will recession become something worse?

Washington: A Depression doesn’t have to be Great—bread lines, rampant unemployment, a wipeout in the stock market. The economy can sink into a milder depression, the kind spelled with a lower case “d".

And it may be happening now. 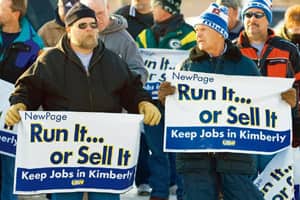 The D-word: A December 2008 picture of people protesting job losses in Kimberly, Wisconsin. Nobody knows for sure, and nobody can say when or whether the downturn may deepen from a recession to a depression. Matt Ludtke / Bloomberg

But with each new hard-times headline, it seems more likely that the next depression is on its way.

“We’re probably in a depression now. But it’s not going to be acknowledged until years go by. Because you have to see it behind you," said Peter Morici, a business professor at the University of Maryland.

No one disputes that the current economic downturn qualifies as a recession. Recessions have two handy definitions, both in effect now—two straight quarters of economic contraction, or when the National Bureau of Economic Research makes the call.

Declaring a depression is much trickier.

By one definition, it’s a downturn of three years or more with a 10% drop in economic output and unemployment above 10%. The current downturn doesn’t qualify yet.

The Great Depression retains the heavyweight crown. Unemployment in the US peaked at almost 25%. From 1929 to 1933, the US economy shrank 27%. The stock market lost 90% of its value from boom to bust.

Few economists expect this downturn will be the sequel. But nobody knows for sure, and nobody can say when or whether the downturn may deepen from a recession to a depression.

Policymakers and economists note there are safeguards in place that weren’t there in the 1930s: deposit insurance, unemployment insurance and an ability by the government to hurl trillions of dollars at the problem.

Most post-war US recessions have come after the Fed has increased interest rates to cool down rapid economic growth and inflation. Later, the Fed lowers rates and helps restart the economy, with the housing and auto sectors—both sensitive to interest rates—leading the way.

This time is different: As Senate banking committee chairman Chris Dodd said, “Our housing and auto sectors are leading us not out of recession, but into it."

What’s more, the Fed no longer has the ability to jump-start recovery by lowering interest rates. The central bank has already effectively lowered the short-term rates to zero.

“It is certainly plausible that the kinds of policy measures that have been good enough to tame the business cycle are no longer adequate in a fast-moving, highly leveraged, highly networked economy," said Anirvan Banerji of the Economic Cycle Research Institute.

Today’s economic indicators don’t project a depression. But Banerji is cautious. Economic data in 1929 didn’t show the stock market crash was about to lead to years of economic misery, either. “The Great Depression didn’t start out as a depression," Banerji said. “It started out as a recession."

The depression that consumed most of the 1870s and followed something called the Panic of 1873 makes a better comparison to what’s happening now, said Scott Nelson, a history professor at the College of William and Mary.

Financial markets had become centrally located by the 1870s, notably in London. And nations had not yet enacted the protectionist trade policies that were in place by the 1930s.

The downturn lasted a little more than five years, according to the economic research bureau—four times as long as what the US has endured so far in this downturn.

Today’s recession is already longer than all but two of the downturns since World War II. But for now, officials are being extremely cautious about the D-word. Alfred Kahn, a top economic adviser to president Jimmy Carter, learned that lesson in 1978 when he warned that rampaging inflation might lead to a recession or even “deep depression".

When presidential aides asked him to use another term, Kahn promised he’d come up with something completely different.