Mumbai's new development plan proposes to unlock 3,700 hectares of public and private land which is currently under No Development Zones (NDZ)

The Development Plan (DP) for Greater Mumbai has gone through several revisions in the past. The delay in approval of the new plan has for long created confusion among developers with several of them holding off their housing projects. 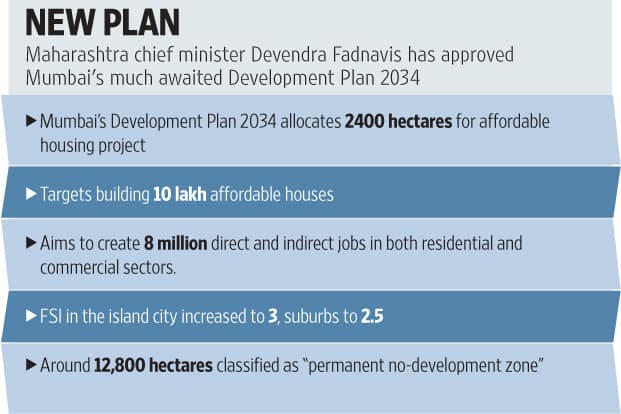 The new DP proposes to unlock 3,700 hectares of public and private land which is currently under No Development Zones (NDZ). Of this, 2,400 hectares has been allocated for building around 10 lakh affordable homes in the city.

Mumbai municipal commissioner Ajoy Mehta said that the new DP targets to provide an affordable home to each and every Mumbai citizen by the year 2034. He said the DP envisages creation of 8 million direct and indirect jobs in both residential and commercial sectors.

For first time in Mumbai’s history of civic planning, the new DP has also demarcated a whopping 12,859 hectares as “permanent no development zone". In such areas, no construction activity will be allowed.

“This is a remarkable first since the DP ensures that, unlike in the past when areas marked no development zone would also witness development, these zones remain NDZ forever," Mehta said.

Under the new DP, developers will get more floor space index or FSI, which is the ratio of a building’s total floor area to the area of the plot. While FSI in the island city has been raised to 3 from 1.33, for the suburbs it has been raised to 2.5 from 2.

For commercial constructions, FSI has been raised from 1.33 in the island city to 5 and from 2.5 in the suburbs to 5.

Real estate firms and analysts have welcomed the move to open up large tracts for affordable housing while also giving a boost to commercial real estate development in the city. However, a few have warned that the expected increase in construction will create more stress on civic amenities.

“The Mumbai Development Plan 2034 brings in a serious effort, ensuring the target of affordable homes is achieved within a reasonably short time, given the opening up of various categories of land on which such construction was earlier not allowed," Niranjan Hiranandani, co-founder and managing director of the Hiranandani group, a Mumbai-based real estate firm.

He said unlike in earlier years, the new DP has also focused on commercial real estate with an aim to decongest existing central business district areas.

According to Anuj Puri, chairman, ANAROCK Property Consultants, the unlocking of large tracts of land in the city will create “massive real estate activity in the island city and suburbs." However, if infrastructure development does not keep pace with increased construction, the stress on civic amenities and traffic may worsen in the city, he added.

Binaifer Jehani, director, CRISIL Research, agreed that while the expected real estate developments on the back of the new DP are positive for the city’s growth, it is likely to pressurize existing infrastructure further. “Though upcoming metro projects are lined up keeping in mind this DP, the growth of real estate supply is likely to happen faster than the infrastructure extension," he said.