Bangalore: Not long ago, an Indian woman, even a working Indian woman, would almost always have moved from her parents’ house to her husband’s. Perhaps her only freedom would be during college, when she might live on campus or take a room for a year or two at what is known here as the working women’s hostel.

That trajectory has begun to loosen as a surging economy creates new jobs, prompts young professionals to live on their own, and slowly, perhaps unwittingly, nudges a traditional society to accept new freedom for women. 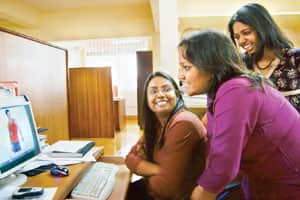 In transition: (From left) Ninitha Koya, Shubha Khaddar and Navia Shetty at work in Bangalore oscillate between wanting to be completely independent and accepting living a life of domesticity.

The changes are sharpest in the lives of women who have found a footing in the new economy and who are for the most part middle-class, college-educated professionals exploring jobs that did not exist a generation ago.

High-technology workers and fashion designers, aerobics instructors and radio DJs, these women in their 20s are living independently, far from their families. Many are deferring marriage for a year or two, maybe more, while they make money and live lives that most of their mothers could not have dreamed of.

Bangalore is at the center of these changes. This south-central city, once a quiet, leafy place favored by retirees, is now the capital of India’s technology and back-office business. The most recent census found that more than half of its 4.3 million residents were under the age of 30.

Posters advertise rooms for men and women living solo. Coffee bars are packed in the evenings. Vegetable vendors ply their wares late into the night. So when Shubha Khaddar, 23, trudges home from work and stops to pick up something for dinner, she rarely finds herself alone. “You’ll find 10 other girls like you coming back with sabzi," she said, sabzi being Hindi for vegetables. Cauvrey Kariappa prepares lunch in her home in Bangalore, India, in July 2007. Cariappa, now 28, went through a gamut of jobs, all of them fruits of the new economy: first at an advertising agency, then a call center, a bank, and finally she decided she would try her hand at designing clothes. As a surging economy creates new jobs and prompts young professionals to leave home and live on their own, it is also slowly, perhaps unwittingly, nudging a traditional society to accept new freedoms for women. The new freedoms have hardly rubbed away old restrictions. As they wrestle with new uncertainties and new choices, many young Indian women are embracing the changes tentatively, tinkering for the time being with the customs of the past. (J. Adam Huggins/The New York Times)

Khaddar has been on a diet, partly egged on by her mother, who is trying to improve Khaddar’s marriage prospects from up north, in New Delhi. On the refrigerator, Khaddar has posted a snarky yellow note to herself: “Lose Weight, You Fat Pig."

In November, she gave notice at work, because she could no longer stand the job. She said she was stressed out at the prospect of finding nothing in Bangalore and having to return to life with her parents in New Delhi. “I don’t think I’m prepared to go home," she said.

Both roommates were trying to stave off their mothers’ intervention in the marriage department, though not entirely. Khaddar has been seeing someone but is yet to tell her parents - and has not completely closed the door on her mother’s plans.

Maddala, for her part, welcomed the prospect of having a husband chosen for her, but not now, and not the overseas Indians for whom her mother has an affinity.

Not long ago, Maddala showed Khaddar a photograph of one such prospect, a young man living in the United States. “The picture just freaked me out," Khaddar recalled while getting ready for work. “I said, ‘Dude, you’re not getting married to that.’ "

In this deeply traditional society, accustomed to absorbing influences of all kinds over the centuries, change comes slowly, if at all. And so the new economy, and the lifestyle it has engendered, has hardly wiped away the old values, particularly with respect to marriage.

Opinion polls in recent years have routinely found that both young men and women favour virginity before marriage, and fairly large numbers say they prefer to marry within their own community. The big Indian wedding is bigger than ever. Dowries prevail, as do dowry deaths.

Yet, for women like these, freedom has brought new choices, new problems and as Khaddar puts it, new guilt.

She sometimes asks herself, should she stay here and enjoy her independence for as long as she can? Or should she return home to New Delhi, find a job, and allow her parents to fix a match with a young man from a north Indian Brahmin family like her own?

She is in transition, she said, between being “completely independent" and “a homely chick," with homely, in Indian English, meaning living a life of domesticity.

Khaddar knows what her parents know, and it makes her nervous: Finding a match will be difficult for a woman like her, a student of philosophy who thinks for herself, lives apart from her parents and likes classic rock.

A bigger fear, she confesses, is not being married at all. “I’m torn about this whole independence thing," she said.

Indian women are marrying later, though still relatively young compared with the West. The mean age of marriage inched to 18.3 in 2001 from 17.7 years in 1991, according to the census, and as late as 22.6 years for the college-educated. Nearly one-third of the work force is female, with rural women employed mostly in agriculture and urban women in services. Although their ranks are minuscule at the top rungs of corporate India, it is common to see women in jobs that either did not exist a generation ago or would rarely be filled then by women, whether gasoline station attendants or café servers, magazine editors or software programmers.

Every now and then, a high-profile crime prompts new hand-wringing and outcry over night jobs for women. But the young working woman living on her own is firmly part of the urban mainstream. Apartments are easier to rent, unlike the days when accommodations were limited to a room in the home of a nosy landlord who would cluck her teeth if a boyfriend spent the night. Radio talk shows now feature callers talking about the pros and cons of a live-in boyfriend.

“I think it’s a very significant shift," said Urvashi Butalia, publisher of Zubaan Books, based in New Delhi, which promotes women’s writing. “It signals a kind of change and acceptability. It testifies to women’s desire and wish to be economically independent, to be able to interact in public space and be in the same world as men." Equally important, she said, is the attitude adjustment among elders. “For families to accept that women will remain single, that they will live on their own, that they will work and defer marriage, is a very, very significant shift," she said. “Even if it’s very small, it’s beginning to happen in a society where before, if you wanted to do that, you’d be out on a limb."

Women in the younger generation, like Cauvery Cariappa, find themselves still bucking their elders on the subject of living alone. She broke the news to her parents after graduating from a Bangalore college in 2000 that she would not be returning home to Ooty, several hours away. Instead, she would work and rent a place here. “People will talk," was her parents’ first reaction.

“The trend is once you’re 21, once you graduate, if you’re not doing something productive, you get married," she said. “’Productive’ according to your parents is very different from your own terms. For them, back then, it was a doctor or some other known job."

Cariappa, 28, went through a gamut of jobs, all of them fruits of the new economy: first at an advertising agency, then a call center, a bank, and finally she decided she would try her hand at designing clothes.

The apartment she shares with two roommates is mostly bare, with a shelf loaded with shoes in one corner, cushions on the floor, and empty liquor bottles lined up smartly on a ledge, which made her mother gasp on her first visit. Cariappa assured her they had not all been consumed in one go.

Here, her companion can come and go without questions from nosy neighbors. But after fighting so hard for her independence, even she could not resist the pull of tradition. In November, Cariappa announced that her freewheeling days were coming to an end.

She and her companion of seven years had decided to marry. That, too, was a break with tradition because he is from another community, from another part of the country.