Has India slipped down the ladder of corporate governance?

The latest boardroom drama at the Tata group has raised uncomfortable questions on corporate governance in India. Were it not for the enviable legacy of the salt-to-software conglomerate, the return of a family patriarch to oust a successor appointed by him just four years ago would have attracted far greater opprobrium.

While the latest episode may be a one-off event, it begs the question: how does India fare compared to peers when it comes to corporate governance norms?

It seems the answer depends on whom you ask.

The latest Global Financial Stability report published earlier this month by the International Monetary Fund (IMF) suggests that while corporate governance norms have improved across emerging markets, corporate governance standards fell in India between 2006 and 2014. The report examined country-level performance on variables such as strength of investor protection, protection of minority shareholder interests, and disclosure and reporting norms. In most of the key indicators, India’s score seems to have dropped. As the chart below shows, India’s score in protection of minority shareholder rights has declined, the report suggests. 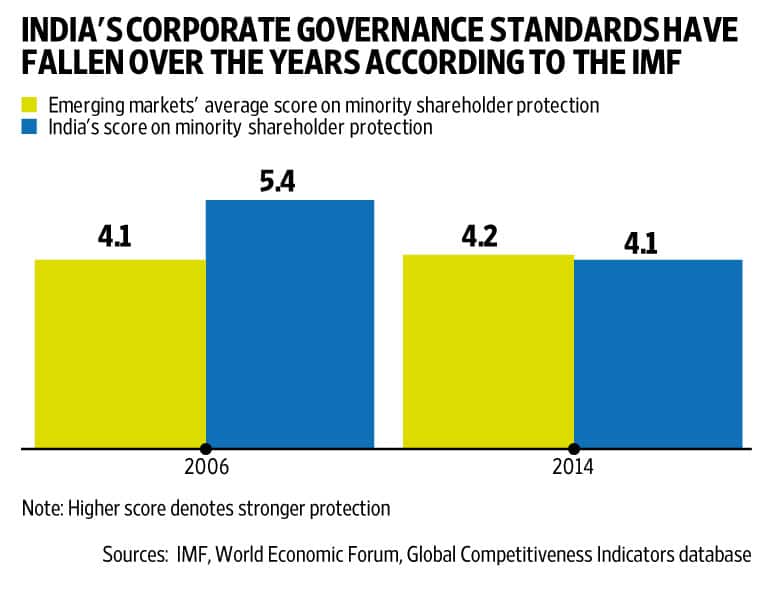 The apparent decline in corporate governance norms is puzzling as the past few years have witnessed three important changes that have strengthened minority shareholder rights and corporate governance regulations: first, a new Companies Act which has tightened norms to be followed by firms; second, tightening of regulations relating to minority protection by market regulator Securities and Exchange Board of India or Sebi, and third, a surge in investor activism in the country which has helped minority shareholders take on promoter groups.

Corporate governance experts in the country agree that the country scores used in the report are counter-intuitive.

“In my opinion, since the disclosures have increased in India as stated in the report and as is evident from the companies Act, 2013 and provision of e-voting facility to the shareholders, the indices for ‘Protection of Minority Shareholders’ Interests’ and ‘Strength of Auditing and Reporting Standards’ ought to increase," said J.N. Gupta, co-founder and managing director of corporate governance advisory Stakeholder Empowerment Services.

Shriram Subramanian, founder and managing director of corporate governance advisory firm InGovern, said that scores on audit and reporting standards should have seen an improvement after rules were tightened “especially after the Satyam scam".

A closer look at the data shows that most corporate governance-related indicators were drawn from the Global Competitiveness Indicators published by the World Economic Forum (WEF). The corporate governance indicators are all based on responses to questions asked in a survey of executives (the Executive Opinion survey). For instance, the survey asks respondents to rate on a scale of 1-7 the extent to which minority shareholders are protected by law in their home country. Similar questions cover other indicators as well. The sample size of the India survey was 211 in 2014, and 68 in 2006. Such surveys largely reflect perception and sentiment on corporate environment, and may not always reflect changes in laws and regulations.

It is possible that the corruption scandals and corporate scams which emerged after 2008 impacted sentiment negatively. In fact, companies which were politically connected saw their stock prices fall sharply during this period, according to an index of connected companies constructed by brokerage house Ambit Capital. Heightened sensitivity to such issues may have affected the survey responses. But the responses show a similar trend even after 2014, the WEF website shows, suggesting a disconnect between regulatory changes and executive sentiments.

An alternative database of the World Bank, however, suggests an improvement in corporate governance norms in India in recent years. The World Bank reports on doing business show that India improved its rank in protection of investor and minority rights significantly over the past decade, as the chart below shows. These rankings seem to be in sync with the views of corporate governance experts cited earlier. The World Bank reports are also based on surveys but these surveys are more detailed and attempt to elicit information on changes in securities regulations, company laws, civil procedure codes and court rules of evidence rather than rely on sentiment. The reports for a particular year are released before that year begins. For example, the Doing Business 2017 report was released on 25 October 2016. The World Bank reports show that India’s rank in investor protection had fallen between 2007 and 2013 before rising sharply in 2015. India ranked seventh among all economies surveyed in 2015, ahead of several advanced economies.

The 2016 and 2017 Doing Business Reports showed that India’s rank on investor protection (of minority shareholders) slipped to 8 and 13, respectively. However, its distance to frontier or DTF score was 73.33 in the latest survey, slightly better than the 72.5 recorded in 2015. The score measures how close a country is to the best possible performance on a given indicator, with higher scores indicating better performance. This suggests that the latest drop in India’s rank has more to do with other countries catching up, rather than India regressing on governance practices. The DTF score suggests that investor protection standards have in fact improved slightly since 2015.

The World Bank reports seem to indicate that corporate governance standards in the country may not be as dismal as one may infer from the WEF and IMF reports.

It remains to be seen if executive sentiment on corporate governance catches up with the changes in the regulatory environment in the coming years, or the disconnect between the two remains as stark as it is today.

Dipti Jain contributed to this story.