How the Supreme Court has evolved since 1950

The Supreme Court is more diverse todaythan in the early 1950s,with the bigger concern now being lack of judges amidgrowing volume ofpending cases

New Delhi: India’s Supreme Court has three new judges—justices Indira Banerjee, Vineet Saran and K.M. Joseph—but not without controversy. Of the new appointments, justice Joseph’s nomination was initially rejected by the government citing his lack of experience and over-representation from Kerala (which already has a judge in the Supreme Court).

While there are no specific rules for regional origin, a Supreme Court ruling in 2015 by former chief justice J.S. Khehar suggests that they try to maintain regional representation.

The current crop of judges, including the new additions, represents 12 of the nation’s high courts.

This is in stark contrast to India’s first Supreme Courts, which were much smaller and dominated by judges from Bombay, Madras and Calcutta—India’s oldest high courts.

In the first decade of the Supreme Court, these courts accounted for nearly two-third of all representation; this decade has already seen 17 different high courts represented (charts 1A and 1B). 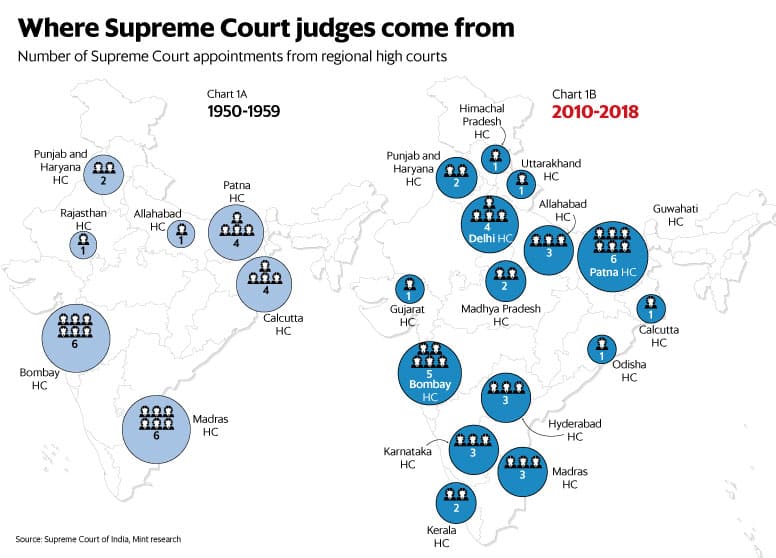 But even as geography changes, much else remains similar. The Supreme Court, then and now, is overwhelmingly male. While the newly appointed justice Indira Banerjee is the third sitting woman judge in the current Supreme Court, she remains only the eighth woman in history to represent the apex court.

It took 49 years for India’s first female judge and we still await a first female Chief Justice. And as the current Supreme Court deals with issues of caste, some, including the government, have noted a lack of representation from Dalit and Adivasi communities (Scheduled Caste/Scheduled Tribe, or SC/ST).

In their rejection of K.M. Joseph’s initial nomination, the government had observed that there had not been SC/ST representation at the apex court for a while. The last SC/ST judge, justice K.G. Balakrishnan, retired in 2010. Balakrishnan remains India’s only Dalit (SC) chief justice.

While recent caste data is not available, American legal scholar George Gadbois, author of Judges of the Supreme Court of India, found that between 1950 and 1989, there was less than 3% SC/ST representation in the Supreme Court, and 92% of judges were either Brahmins or other “forward castes".

Historically, Indian judges have been united not just by gender and caste, but also through family ties. Our analysis of Supreme Court biographies shows that at least 20% of India’s chief justices have had a family member practice in the high courts or in the Supreme Court. In the current Supreme Court, the most prominent example is justice D.Y. Chandruchud, the son of Y.C. Chandruchud, who was the longest-serving chief justice in the apex court’s history.

But more than the state, caste and gender of judges, a bigger issue plaguing India’s apex court is simply the lack of judges. Staff shortages are a chronic problem across India’s judiciary. In a speech last month, the current Chief Justice said that 24% of all judicial posts remain vacant. The Supreme Court is no different: 19% of its justice posts are vacant. And this is after the three recent appointments, which increased the strength to 25. This shortage is particularly problematic with the large volume of pending cases at the apex court. The number of pending cases increased 8% over the past decade to 54,013 in 2018, data from the Supreme Court show.

One reason could simply be the difficulty in selecting judges. “Supreme Court judges hold the keys to the Constitution—finding the judges who can play this role is not easy," says Arghya Sengupta, research director at Vidhi Centre for Legal Policy.

Another reason for the persistent shortages could be the courts’ mandatory retirement age. High court judges are forced out at 62, Supreme Court judges at 65, which, by global standards, are low retirement ages.

The challenge is especially pertinent for chief justices. As the senior-most judges in the court, becoming a chief justice takes time (on average, more than six years), but once one becomes a chief justice, he rarely has much time.

The average tenure is 1.5 years, but a few are particularly unlucky. Justice J.C. Shah, for instance, had to wait 11 years to be elevated, but retired within a month of becoming Chief Justice.