Hong Kong: China has begun a concerted effort to keep its export economy humming, even as demand for its goods has plummeted with the global downturn.

Risking the ire of the US and other trading partners, the Chinese government has quietly started adopting policies aimed at encouraging exports while curbing imports, even though China, as one of the world’s largest exporters, has aggressively criticized protectionism in other countries.

The government has sharply expanded three programmes to help exporters, giving them larger tax rebates, more generous loans from state-owned banks to finance trade, and more government-paid travel to promote themselves at trade shows around the world. 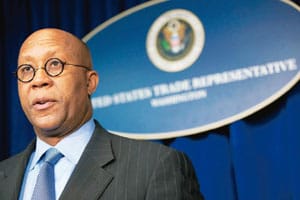 Unfair advantage: US trade representative Ron Kirk. The US and the EU have opposed China’s restrictions on export of raw materials. Joshua Roberts / Bloomberg

The rule, issued as part of the country’s economic stimulus plan and enforcing a seldom honoured Chinese law from 2003 favouring domestic suppliers, exploits China’s failure so far to sign a global agreement barring protectionism in government procurement. And in an effort to strengthen its own exporters, it is limiting how much of certain key raw materials can leave the country.

Ron Kirk, the US trade representative, announced on Tuesday that the US and the European Union had filed a complaint with the World Trade Organization, or WTO, accusing China of limiting exports of raw materials such as bauxite and zinc, of which China is one of the world’s largest producers, to give an unfair advantage to Chinese manufacturers.

“China is not only continuing but accelerating many of the protectionist approaches they’ve taken in the past to promote economic development," said Michael R. Wessel, who was appointed by Nancy Pelosi, the speaker of the House, to the US-China Economic and Security Review Commission.

The policies could help ensure that China’s economy continues to grow, but at the risk of increasing global trade tensions at a sensitive time when more countries are resorting to administrative measures to restrict trade and WTO has warned against protectionism. The policies also fly in the face of China’s own promises and incentives to build an economy based on domestic consumption as well as international exports.

“The focus on maintaining export competitiveness to prevent job losses is clearly trumping longer-term considerations of rebalancing growth and reducing reliance on exports," Eswar S. Prasad, a senior fellow at the Brookings Institution in Washington, wrote in an email message. “But this is a dangerous strategy. Protectionist measures, both explicit and implicit, could be difficult to pull back."

In other moves, Beijing has halted the rise of the renminbi against the dollar by intervening heavily in currency markets, dumping billions in renminbi and buying dollars and other currencies.

Provincial governments also appear to have cut back on their enforcement of counterfeiting laws and other intellectual property protections. Chinese consumers have less need to buy imported goods when they can buy much less expensive copies produced locally.

In March, Prime Minister Wen Jiabao announced that his country would rely on domestic consumption to keep the economy growing as exports shrank in the global downturn. The pronouncement was greeted with a mixture of delight and scepticism by economists and governments the world over, but the sceptics appear to have been borne out.

Despite the havoc the global downturn has wreaked on export-driven economies—exports are down 45% in Japan—China’s exports to the US fell only 12.1% in the first four months of this year, compared with the same period last year. Over the same interval, US exports to China dropped 17.2%.

Yet, the US trade deficit paradoxically narrowed to $67 billion (around Rs3.25 trillion), from $75 billion, for these periods. That is because the trade is so lopsided that a shrinkage of overall trade results in a smaller deficit even when US exports drop faster. The US imports at least $4 worth of goods from China for every $1 of goods that it exports to China.

Chinese officials and economists are quick to defend their country’s policies.

Li Junfeng, an official at China’s top economic planning agency, said recent complaints from foreign wind turbine manufacturers about domestic purchasing rules were without merit. These manufacturers have factories in China and can use them to fill Chinese orders, he said.

Li’s agency, the National Development and Reform Commission, ordered on 4 June that government agencies buy only Chinese goods of all types with money from the government’s stimulus programme. Yet early this year, China criticized a much narrower preference for US-made steel in Barack Obama’s stimulus plan.

Under the rules of WTO, China is prohibited from discriminating by nationality in the purchasing of goods—except for government procurement, which is covered by a separate WTO agreement that virtually all industrialized nations have signed. When China joined WTO in November 2001, and gained full access for its exports to foreign markets, it pledged to join the agreement on government procurement “as soon as possible".

At the same time, the plunge last winter and this spring in Chinese exports has resulted in a shift by many Chinese factories from exports only to a shared reliance on export and domestic markets, said Merle A. Hinrichs, the chairman and chief executive of Global Sources, a Hong Kong company that connects Chinese suppliers with Western buyers. These factories do not always pay licensing fees for patents transferred to them for exports but then used to supply the domestic market.

Counterfeiters “have a very good sense of the legal system", Gould said. “They really don’t think they’re going to be raided."