Consecutive droughts and freak weather in 2014 and 2015 dented India’s foodgrain production and worsened rural distress. For farmers, the weather woes came on top of a drop in prices of key crops like rice, wheat, cotton and sugar. But one sector that escaped the weather shocks--if not the price drops--is horticulture. How did the sector manage this feat? Are fruits and vegetables more resilient to drought than say rice and wheat? A recent report, Horticultural Statistics at a Glance, 2015, released by the agriculture ministry (on 31 December), and previous reports from the ministry shows the structural change under way in India’s farm sector.

These numbers show that most horticulture crops are grown with assured irrigation and, therefore, are more immune to monsoon deficits. This varies from 71% of area irrigated for tomatoes to 86% for potatoes. Eight vegetables that make up 74% of the total vegetable production in the country have 73% access to irrigation.

In comparison, only 50% of the area under foodgrains has access to irrigation. Barring wheat, which is an irrigated crop, irrigation access varies from 16% for pulses to 59% for rice. Another positive for horticulture is that fruits and vegetables are mostly grown by marginal and small farmers (with less than 2 hectare of land). This means that resource-poor farmers are likely to have benefitted most from the growth in horticulture sector. More so, because the value of the horticulture output grew more than double compared with all other crops put together in the four years between 2008-09 and 2012-13. Fruits and vegetables are grown in less than 5% of the country’s gross cropped area, compared to over 63% of the area used to grow foodgrains. 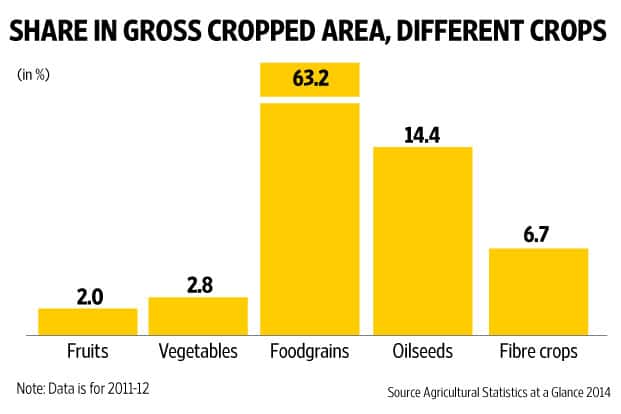 What drove the growth of horticulture sector in India? Better incomes, urbanization and higher consumption of fruits and vegetable seem to be driving the demand which is addressed by small farms. Consumption data from the National Sample Survey Organisation (NSSO) shows that while monthly consumption of cereals per person in rural areas declined from 13.4 kg in 1993-94 to 11.2 kg in 2011-12, consumption of vegetables went up from 2.7 kg to 4.3 kg during this period. 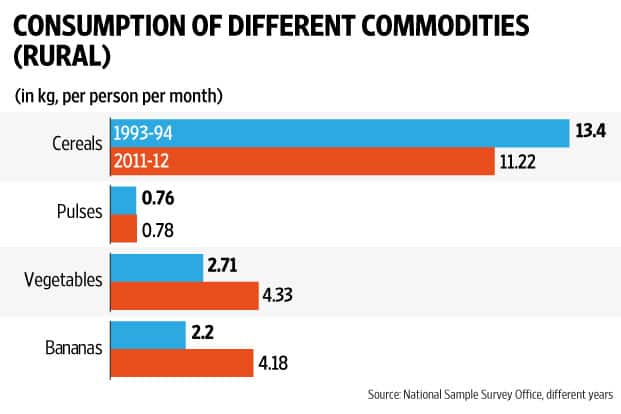 There is no denying that higher incomes have led to a diversification of diet from cereals to fruits, vegetables, meat and eggs and this seems to be driving demand, but data on horticulture production needs to be on a firmer footing, said Himanshu, associate professor of economics at Jawaharlal Nehru University, Delhi.

“The data is suspect as crop cutting experiments (for estimating production) are only done for field crops like potato and onion, while the rest of the production is poorly estimated," he adds.

The agriculture ministry admits the challenges. Since vegetables are grown in small plots, or in the back of houses, they do not have a single point of harvesting, making assessment difficult, noted the Horticultural Statistics report.

In 2013-14, the ministry discontinued the earlier methodology and replaced it with what is known as CHAMAN (coordinated programme on horticulture assessment and management using geoinformatics). This uses a combination of remote sensing technology, sample surveys and market arrivals to estimate horticulture output and area.

Hopefully, the new estimation methodology which is piloted in six states now, will help better understand the changes under way in Indian agriculture and how the farmer undertook that journey.

But estimates apart, the flip slide to the success story of horticulture is that farmers have been regularly affected by price dips, especially during the harvest season of onions and potatoes.

For instance, onion prices plummeted to Rs.7.5 a kg on Tuesday (9 February) in the wholesale market in Lasalgaon, Maharashtra, due to higher arrivals of the late Kharif crop. In August last year, well after the harvest season, prices shot up to Rs.60 a kg in wholesale markets on fear of drought and lower supplies.

The drought is still there and so is the fear of a lower harvest, but the price dips and hikes imply that farmers are selling it dirt cheap after harvest, and traders are reaping benefits during the lean months. It happened with potatoes, when in April last year farmers in northern India left their crop to rot in the field as prices dipped to a measly Rs.2 per kg after a bumper harvest.