The many shades of caste inequality in India

We don't know enough about the socio-economic status of different caste groups, and our political class doesn't want us to know

Over the past couple of years, one Indian state after another has been on the boil because of caste-based agitations. The latest state to be engulfed in caste conflict is Maharashtra, where a stir by the dominant caste of Marathas seems to have led other backward classes (OBCs) and Dalits (Scheduled Castes or SCs) to oppose Maratha demands in unison.

A Mint analysis of a number of socio-economic indicators suggest that while caste continues to remain an important fault line in India’s economy and polity, there are huge variations in the socio-economic status and clout of different ‘backward’ classes and caste groups.

While the STs and SCs still lag behind other castes on most socio-economic criteria, the OBCs are almost at par with other social groups (read upper castes) on several parameters.

For instance, the OBCs are almost at par with upper castes in terms of composition of rural incomes and are investing much more than the latter in agriculture. SCs on the other hand are mired in deep distress and lag behind in ownership of productive resources in farming, as an earlier Plain Facts column .

On another key metric: the ownership of firms and enterprises, the OBCs score far higher than the SCs and STs, the latest economic census shows.

The economic census, which was conducted in 2013 and covered 58.5 million economic enterprises, provides data on social-group wise ownership of proprietary establishments. The relative ownership figures for each social group can be calculated by dividing these figures with the share of each social group in the workforce (as per 2011-12 NSSO data). A relative share of one indicates proportionate ownership while a relative share less than 1 indicates less than proportionate ownership. The NSSO data on caste break-up is based on self-reported data but is among the most credible and updated data on caste-wise break-up of the population. 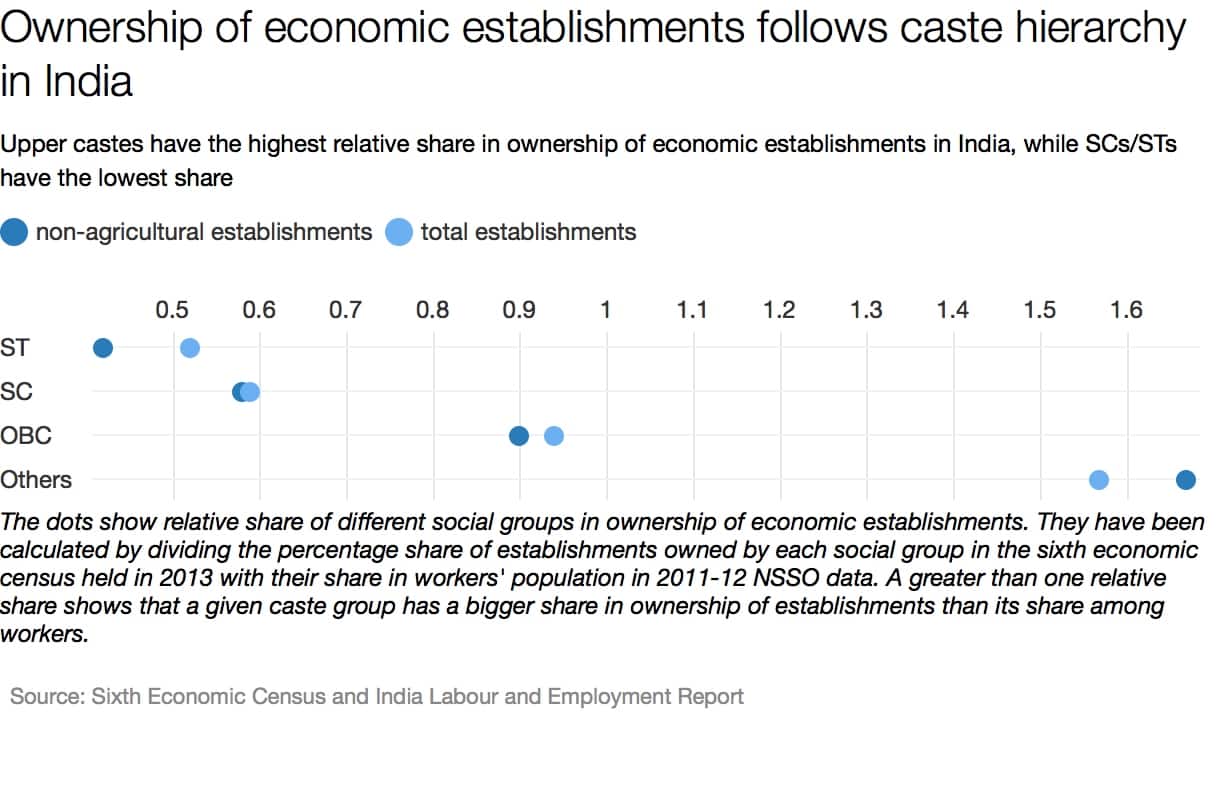 As the above chart shows, OBCs have an almost proportionate ownership, while SCs have the lowest relative share among all social groups. The ownership of SCs/STs and OBCs in non-agricultural establishments is lower than overall figures, suggesting that India’s socially deprived groups typically face greater barriers in the non-farm sector of the economy. The scale of deprivation is however far higher for SCs and STs than for OBCs, the data suggests.

While a big reason for such economic inequality could be lack of access to capital, research suggests that social discrimination might also be hindering the entry of Dalits in certain businesses. In a 2013 research paper, Ashwini Deshpande and Smriti Sharma at the Delhi School of Economics, used data from the third and fourth rounds of the Indian Micro, Small and Medium Enterprises Survey to show that the share of SC-owned firms in the food and beverages category was much lower than the national average and the average for other social groups. The authors also found that SCs had a disproportionate ownership of leather-related industries. While the paper shows that these numbers have fallen between the third and fourth census (conducted in 2001-02 and 2006-07), it also shows that urban areas seem to display a higher degree of segregation than rural areas, which the paper terms as an enigma.

The employment-category wise break up of social groups provided by the 2011-12 NSSO also point to the stark inequality in socio-economic status between SCs (and STs) and other castes. The data show that Dalits are the least likely to start their own enterprises and most likely to work as labourers for others, with SCs having the lowest relative share in self-employed category and the highest share in casual labourer category. The OBCs have a roughly proportionate share in each employment category.

While the SCs are worse off in comparison to OBCs in ownership of economic establishments, a look at the share of regular workers might suggest that they are at par with OBCs in terms of access to quality employment. However, headline figures on regular workers provided by the NSSO might be a bit misleading on this count, because they do not tell us about the earnings associated with a regular job.

Data from the India Human Development Survey (IHDS) provides greater clarity on the nature of employment of different caste groups. The analysis of the IHDS employment data is based on a job classification methodology used by Mehtabul Azam of Oklahoma State University in a 2013 paper. The classification splits regular jobs into four categories: white-collar skilled; skilled or semi-skilled; unskilled and farmers. To give an example, the classification would treat an engineer as a white collar worker; a typist as a semi-skilled worker; and a sweeper as an unskilled worker. The data shows that non-Muslim upper castes have a much higher share among white collar employees, while Dalits and Adivasis (SCs/STs) have a much greater share among unskilled workers in comparison to OBCs. Thus, even though SCs and OBCs might have a similar share among regular workers, the nature of jobs SCs (and STs) are engaged in is qualitatively different.

Not surprisingly, poverty levels are highest among SCs and STs. More than half of the SC population belongs to the poorest two quintiles (based on consumption expenditure data). The figure for STs is similar, as the chart below shows. Roughly 40% of OBCs and 20% of upper caste Hindus are in the poorest two quintiles, NSSO consumption expenditure data shows.

An important finding from the two charts given above is the poor condition of Muslims on most of these indicators, which has also been highlighted in official reports such as that of the Sachar Committee. The existing framework of caste-based affirmative action has been of little help to Muslims, especially lower caste Muslims. Another caveat vis-à-vis these statistics is that the headline figures on STs might be very different from the condition of tribal population outside the north-eastern states. Unlike the relatively better off ST population in the north-east, the tribal population in places such as central India is extremely poor and backward.

To surmise, these statistics underline the need to take a nuanced view of caste based discrimination and inequality in India.

While aggregate data for different social groups tell us about the differences in well-being of different social groups such as OBC and SC/ST from each other, there are significant intra-group differences as well. Several social scientists have also highlighted this problem. In a 2009 article published in the Seminar psephologist-turned-political activist Yogendra Yadav underlined the fact that while a section of OBCs matches upper castes in terms of socio-economic indicators, the socio-economic status of several sections within the OBCs were even worse than SCs.

In an article published in the Indian Express this year, the political scientist Pratap Bhanu Mehta also raised questions about the way we classify caste groups and design affirmative action based on that.

“Should the same instruments that we rightly use to redress the oppression of Dalits be used to address the social challenges of other dominant castes?" Mehta questioned. “To what extent are OBCs a descriptive or a constructed category? Is there a selection bias in the hypothesis when we assume that caste is for all groups the predominant axis that explains their condition?"

India’s political class has largely shied away from engaging with such debates. Perhaps, given the lack of diversity in our political leadership itself, this is not so surprising. As an earlier Plainfacts column had pointed out, Dalits have a miniscule representation from seats which are not reversed for SC candidates.

According to the political scientists, Christophe Jaffrelot and Gilles Verniers, OBCs have a share of around 20% among elected MPs in the Lok Sabha . While this figure is much more than the share of SCs, it still falls short of a proportionate share given the fact that OBCs have a population share of around 40% in India’s population. The dominance of upper castes and OBCs in Indian Union cabinets has been stark since the early days of the Indian republic, as an earlier Plain Facts column showed. The already skewed balance gets even worse when the BJP comes to power, as can be seen in the figures for 1999 and 2014.

It can be argued that political representation is neither a necessary nor a sufficient condition for social justice. This is after all not a new argument. The Congress party frequently used this argument to reject the demand by B.R. Ambedkar for caste-based quotas. Ambedkar consistently argued that the Indian government, despite the best of motives will not be able to do much to address the grievances of Dalits unless it had Dalit representation.

“We feel that nobody can remove our grievances as well as we can, and we cannot remove them unless we get political power in our own hands," said Ambedkar in one of the sittings of the round table conferences held in 1930 in London to decide the agenda for political reform in India.

It can also be argued that the lack of a nuanced understanding of India’s caste realities spring from a lack of credible and granular data rather than political designs. However, the experience of the Socio-economic Caste Census (SECC), which was conducted in 2011, shows that even the lack of disaggregated caste data might be a result of flawed political decision making at the highest levels. While some political parties have been demanding that caste-wise data from the SECC should be released, experts have expressed scepticism over the availability of the data in the first place.

In an article written in The Hindu last year, former census commissioner and registrar general of India M, Vijayanunni argued that the UPA government played a saboteur’s role while designing the SECC. By delegating the responsibility of carrying the census to state governments, which had little expertise of undertaking such a task and asking enumerators to just record responses for caste names, without any predetermined categories or guidelines—which would make systematic collation of the final results impossible—the UPA government ensured that SECC would not result any comprehensible information about caste, argued Vijayanunni.

The writing on the wall is clear. Unless we have credible and granular data on relative backwardness among India’s different social groups, India’s political discourse would be vulnerable to being exploited by both kinds of extreme voices—those who dismiss the reality of caste-based discrimination in the country, and those who have realised that demanding reservations for their community is a lucrative strategy of political blackmail.

Tadit Kundu contributed to this story.