Is transparency in lobbying the silver bullet for controlling corruption?

New Delhi: The recent sting by news portal Naradanews showing Trinamool Congress legislators accepting cash to lobby for a private company has once again exposed the dark underbelly of corruption in Indian politics.

But this is not the first time.

In 2005, 11 MPs were expelled from Parliament after a sting appeared showing them taking money to ask questions in the House. In 2013, allegations of Wal-Mart lobbying to get foreign direct investment (FDI) in multi-brand retail approved in India had created a huge furore in Parliament.

Many people have argued for bringing lobbying under the purview of regulation and disclosure in India. Kalikesh Narayan Singh Deo, a Lok Sabha MP from Biju Janata Dal (BJD) has brought a private member bill titled The Disclosure of Lobbying Activities Bill, 2015, which was reintroduced in the lower house last month. The bill talks about the need to create greater public awareness about lobbying activities in India.

Like lobbying, disclosure of political funding in India also leaves a lot to be desired. To begin with, the use of dirty cash in Indian elections is a common practice. In a 2011 paper, political scientist Milan Vaishnav argued that one of the reasons for political parties fielding candidates with criminal backgrounds was their ability to garner finance and even subsidize party funding. According to an Indian Express report, the Election Commission had seized ₹ 195 crore of cash in the run-up to the 2014 general elections.

As far as disclosure of lobbying is concerned, there is no transparency at all. Matters are made public through stings and exposes like the recent Naradanews one or the Radia Tapes, which had created a political storm. To take a recent example, despite all the debate around making larger health warnings on cigarette packets mandatory, we do not know whether or not tobacco companies are lobbying on this issue.

What about countries that have strict disclosure and regulatory norms for lobbying and political funding? Is politics less corrupt there?

Not necessarily, shows a comparison of India with the US.

Unlike India, there is full disclosure of source for more than 95% of the funding to Democratic and Republican Party in the US. In a report published last year, The New York Times gave detailed information about how 158 super-rich families and their companies had funded half of the first round of the campaign for US presidential elections. Lobbying is subject to strict regulation and disclosure requirements in the US.

But it hasn’t made much difference to corruption in politics, going by the findings of international corruption watchdog Transparency International. According to its latest Global Corruption Barometer data, most respondents in the US and India see politicians as the most corrupt among all categories. (See Chart 2) 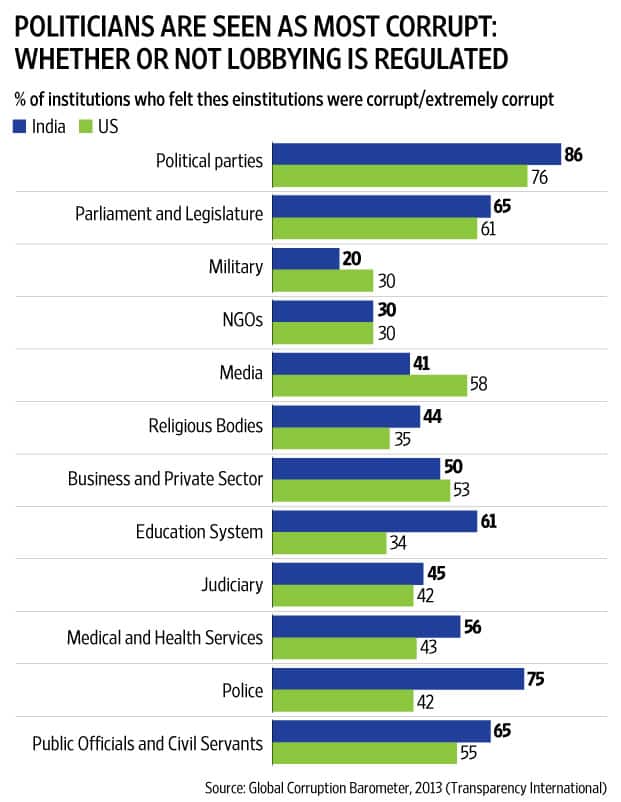 Why is transparency failing to act as an effective antidote to corruption?

One reason might be the shift in the nature of lobbying and business-government relations itself, suggests a 2010 political science PhD dissertation submitted at the University of California Berkeley by Lee Drutman, which has also been published as a book.

Drutman argues that in contrast to 1970s when businesses thought it was better to maintain a safe distance from the government and avoid politics, today they are more than willing to resort to lobbying for both “offensive and defensive purposes".

Drutman’s research shows that the need to protect against policy changes that could be harmful and need to improve the ability to compete by seeking favourable changes in government policy were among the top two reasons for lobbying in the US. Interestingly, the government being a direct purchaser of the company’s products or services (what would qualify as winning contracts) was ranked last among seven reasons.

While lobbying might not amount to bribery in the legal sense, its potential of inflicting damage is huge. A 2009 IMF Working Paper argued that firms used lobbying to prevent regulation which could have controlled reckless lending behaviour by lenders in the US, thereby suggesting a link between lobbying and the financial crisis.

Even in India, some of the biggest scams in the recent past were a result of corporates influencing policy, irrespective of the fact whether or not money was exchanged. Allocation of 2G spectrum and coal blocks are some such examples. In a paper written before the 2014 Lok Sabha elections, Maitreesh Ghatak, professor of economics at the London School of Economics, and his co-authors argued that rent-seeking through natural resources had an important role in creating the economic boom during the UPA II regime.

Regulation and disclosure of political funding and lobbying activities is no guarantee for lack of political corruption and vested interests influencing policies. A silver lining among the dark clouds: awareness about the benefits of net neutrality among citizens ensured that despite extensive lobbying, a gigantic corporation could not influence public policy in India.

This story has been modified from its earlier version.