When electricians earn more than engineers

A TeamLease report finds that across 12 sectors, salaries of at least one vocationally skilled blue collar job exceeded those of engineers by between 10% and 27%

Bengaluru: If you are a civil engineer straight out of college and working in the construction industry, an equally fresh electrician may be making at least 10% more than you.

And experienced hands in gems and jewellery factories are earning as much as graduates from business schools, according to a recent study.

Professional degrees, long prized in India because of the job prospects and social status they command, are facing competition from humble vocational skills.

A growing demand for vocationally trained workers means that, at least as far as salaries are concerned, blue collar jobs are proving to be more lucrative than the traditional white collar jobs.

Staffing firm TeamLease Services studied salary reports of people in job portals and analysed its internal database of last three years to determine the salaries of people with vocational jobs and professional degrees across 12 sectors from automotive to retail.

It found that in all the sectors, salaries of at least one vocationally skilled blue collar job exceeded those of engineers by between 10% and 27%; and that in six out of the 12 sectors studied, they have managed to come on par with those of MBAs. 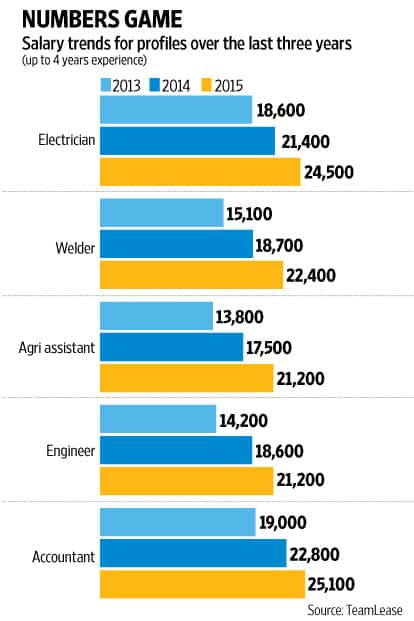 A master craftsman in a gems and jewellery factory earned as much as an MBA graduate across all experience levels, the study found.

“It’s a great job. I’m not answerable to anyone and I’m my own boss. I get paid for my skill. Good electricians who are sincere and don’t cheat are in great demand," said Chennai-based A. Barkath, a 32-year-old electrician who earns over 30,000 a month despite having studied till only class 5.

There is a huge premium on such skills because most jobs in India are skill-based but only 2% of the Indian workforce has formal education in vocational skills. This drives up their salaries, said Rituparna Chakraborty, co-founder and senior vice president, TeamLease.

A decade ago there were about 200,000 engineers and 400,000 engineering jobs; today there are 1.5 to 2 million engineers for the same number of jobs. As a result engineers’ entry level salaries have remained more or less constant over the last decade at about ₹ 25,000 per month, added Chakraborty.

The demand for skills comes as the government pushes India to become more of a skills-based economy with its Skills India and Make in India drives. And there has already been a 40% increase in Foreign direct investment (FDI) inflows into the country, thanks to the Make in India mission, according to the latest Economic Survey.

Given that the major aim behind the Make in India initiative is job creation and skill enhancement in 25 sectors of the economy—including automobiles, aviation, biotechnology, chemicals, construction, defence manufacturing, electrical machinery, electronic systems and mining—the need for vocational skills is set to grow further.