Washington: Federal Reserve chairman Ben Bernanke said on Thursday the US central bank was ready to shield the economy if financial troubles mount, but offered few hints that further monetary stimulus was imminent.

Bernanke told Congress the Fed was monitoring “significant risks" to the US recovery from Europe’s debt and banking crisis closely.

But for financial markets hungry for clues about the prospect for a third round of Fed bond buys, Bernanke’s testimony disappointed. Many economists at prominent banks have been expecting the Fed to take some new policy steps at its June 19-20 meeting.

“The Federal Reserve remains prepared to take action as needed to protect the US economy in the event that financial stresses escalate," Bernanke told the Joint Economic Committee. 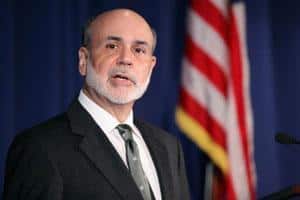 Weak US employment data last week and an escalation in the euro zone’s crisis has raised speculation the Fed will again have to step in to support a fragile recovery.

Yet Bernanke’s tone was far from crisis mode. Indeed, he sounded somewhat sanguine about the outlook. “Despite economic difficulties in Europe, the demand for US exports has held up well," he said.

His comments stood in sharp contrast to those of Fed vice chair Janet Yellen, who late on Wednesday made the case for further monetary stimulus to insure against the risk of a downturn.

Bernanke made no such suggestions, but he did tell legislators tighter US fiscal policies set to kick in early next year barring congressional action “would, if allowed to occur, pose a significant threat to the recovery."

“I don’t think he is definitely saying that QE3 is on the way. He’s saying what he has said before, reassuring people that they will act if things deteriorate further," said Eliasson.

A government report on Friday showed the economy created just 69,000 jobs in May. Bernanke said the numbers could signal that faster economic growth is needed to keep the labor market on a path of steady improvement.

Bernanke said he did not want to prejudge the outcome of the Fed’s next meeting on 19-20 June . He said the main question policymakers will face is: “Will economic growth be sufficient to achieve continued progress in the labor market?"

The US recovery appears increasingly at risk with ongoing worries about Spain’s banks and concerns about a key election in Greece, which occurs just days before the Fed meets, unsettling global financial markets.

Growth in major emerging economies like Brazil, India and China has also slowed sharply. China responded on Thursday with its first interest rate cut since 2008.

The Fed has held benchmark US interest rates near zero since late 2008 and has expanded its balance sheet sharply to nearly $3 trillion in an effort to keep long-term borrowing costs down.

Its most recent stimulus program, known as Operation Twist, which involves selling shorter-dated Treasury securities and buying longer-term ones, is set to expire at the end of June.