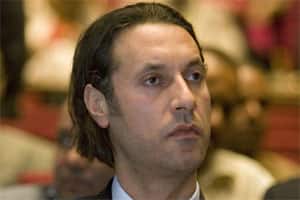 “He was arrested today in Sirte," Colonel Abdullah Naker told Reuters on Wednesday. Other NTC sources said Mo’tassim was taken to Benghazi where he was questioned at the Boatneh military camp where he is being held. He was uninjured but exhausted, the officials said.

Hundreds of NTC fighters took to the streets in several Libyan cities and fired shots in the air in celebration.

Gadhafi loyalists have fought tenaciously for weeks in Sirte, one of just two major towns where they still have footholds, two months after rebels seized the capital Tripoli.

“We have control of the whole of the city except neighbourhood ‘Number Two´ where the Gadhafi forces are surrounded," said Khaled Alteir, a field commander in Sirte.

Green flags, the symbol of Gadhafi’s 42 years in power, still fly above many of the buildings there.

NTC tanks moved close up to buildings used by snipers and blasted large holes in the walls. Behind them came pick-up trucks mounted with heavy machine guns, and behind them, the infantry armed with AK-47s began the assault.

The remaining forces still loyal to Gadhafi have been firing back on the attackers with small arms and rocket-propelled grenades, but they were no longer using heavier weapons and their forces had lost some cohesion, an NTC commander said.

“We’ve noticed now they are fighting every man for himself," said Baloun Al Sharie, a field commander. “We tried to tell them it’s enough and to give themselves up, but they would not."

The assault by the new government forces is still being aided by Nato reconnaissance and strike aircraft. Britain said its jets had bombed and destroyed two pick-up trucks belonging to Gadhafi’s forces in Sirte on Wednesday.

Mo’tassim is seen as belonging to a conservative camp -- rooted in the military and security forces -- which resisted his brother Saif al-Islam’s reform attempts.

A senior NTC military official told Reuters that Mo’tassim had cut his usually long hair shorter to disguise himself.

Gadhafi and his most politically prominent son, Saif al-Islam, have been on the run since the fall of Tripoli in August. Gadhafi himself is believed to be hiding somewhere far to the south in the vast Libyan desert.

His daughter Aisha, her brothers Hannibal and Mohammed, their mother Safi and several other family members fled to Algeria in August and have lived their since. Another son, Saadi, is in Niger.

Five corpses shown to a Reuters team wore civilian clothes and had their hands tied behind their backs and gunshot wounds to the head.

“There are about 25 innocent people with their hands tied. There is no humanity. It’s sad," said NTC commander Salem al Fitouri standing besides the corpses, which he said had been there for at least five days.

Medical workers at a hospital outside Sirte said four NTC fighters were killed and 43 others were wounded on Wednesday.

The NTC has said it will start the process of rebuilding Libya as a democracy only after the capture of Sirte, a former fishing village transformed by Gadhafi into a showpiece replete with lavish conference halls and hotels.