The politics of Karnataka’s ‘mutts’

Bangalore: Congress president Sonia Gandhi will visit Karnataka for the first time in three years later this week and media reports say that she is expected to participate in the birthday celebration of Shivakumara Swami, the head of the influential Sree Siddaganga Mutt in Tumkur.

If that happens, it will only serve to highlight the importance of mutts (or monasteries) in the only south Indian state ruled by the national opposition party, the Bharatiya Janata Party (BJP).

Monasteries such as the Siddaganga one have always been powerful in a state where political affiliations and voting patterns are often decided by caste. For instance, in March, the pontiff of the Adichunchanagiri Mutt, revered by the predominantly agrarian Vokkaliga community, declared his support for chief minister D.V. Sadananda Gowda, a Vokkaliga himself. Immediately, a group of Vokkaliga BJP legislators distanced themselves from former chief minister B.S. Yeddyurappa’s attempts to dislodge Gowda. Yeddyurappa belongs to the Lingayat community (as does Swami). 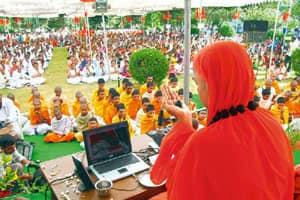 Like him, the heads of most monasteries in the state seem to realize the need to stay relevant, even if it means engaging with the political establishment. Soon after the campaign against Posco, Siddhalinga Swamy convened a meeting of around 60 like-minded seers. At the end of the meeting, the seers issued a declaration that said: “The duties of religious heads are not just limited to performing pujas in mutts, temples or other religious places. The seers should rush to help the people, when they are in dire need of it."

The history of the mutts

Karnataka’s mutts are caste-based monasteries centred around a pontiff, in whom a lot of power is vested, and whose sphere of influence is usually restricted to a few districts (although some have a wider sphere of influence). They are different from the more modern pan-Indian religious or spiritual institutions such as those founded by Baba Ramdev, Mata Amritanandamayi or Sri Sri Ravi Shankar.

Most monasteries in Karnataka are associated with the Lingayat community. The Lingayats, also known as the Veerashaivas, trace their history to 12th century Hindu reformer Basaveshwara and, by some estimates, they have around 400 mutts in the state. (Lingayats account for around 17% of the state’s 61.1 million population.)

Lingayats eschew the practice of praying to idols in temples, and instead practise a more personal form of worship. In a forthcoming paper, Aya Ikegame, a UK-based researcher who has been studying the mutt culture in Karnataka for the past few years, writes: “The religious tradition of the Lingayats or Veerashaiva has a tendency to place a much larger emphasis on their gurus and mutts than on priests and temples."

Over the past few decades, the state’s monasteries have grown in influence by establishing schools and colleges. “Almost all mutts have started educational institutions. Giving education was considered as part of the spirituality and social service, though some seers have also opened schools and colleges for profit," said G.N. Mallikarjunappa, executive director of the educational arm of the 600-year-old Murugharajendra Mutt in central Karnataka.

The Murugharajendra Mutt runs around 150 educational institutions; the Suttur Mutt, 300 across Karnataka, Tamil Nadu and Uttar Pradesh; and the Siddaganga Mutt (Tumkur) and the Sirigere Mutt (Chitradurga) have around 30,000 students each studying at schools and colleges they run.

There are other ways, too, by which the monasteries try to stay relevant. The Sirigere Mutt, for instance, runs a “court" every Monday to resolve disputes. And when Karnataka was ravaged by floods in 2009, the Lingayat mutts were at the forefront of the rehabilitation programme. Yeddyurappa, who was then chief minister, announced that the government would shift 226 flood-prone villages with money from the government and companies, with responsibility for the construction of new villages given to non-governmental organizations and mutts. As Ikegame writes: “...the rehabilitation works began transforming from a potlatch of generosity among gurus into a holy alliance of the state, corporates and the mutts: a new sacred public-private partnership".

The mutts have also sought to extend their franchise to so-called backward classes. For instance, Shivamurthy Murugharajendra Swami, the pontiff of the Murugharajendra Mutt, trains individuals in Lingayat philosophy and also grants land to some of those people who belong to the backward classes, to start their own mutts that are affiliated to the main mutt. Basavaprabhu Ketheshwara Swamy, who runs a mutt for the Medana Keteshwara community, a scheduled tribe, is one such individual. “I was fortunate to have studied under Shivamurthy Swamiji, and he has given me purpose in life," says Basavaprabhu. The results of his attempts at introducing the Lingayat way of life to his community—vegetarianism, abstinence from alcohol and education— have been mixed. “Historically, we have been non-vegetarians, and alcohol consumption has been very high. So, it’s difficult for our community to completely abandon these."

And finally, recent politics in Karnataka has meant that the mutts are more relevant than ever.

The state government has emerged as an unlikely benefactor for mutts targeting the backward classes. In this year’s budget, the government allotted a substantial portion of the Rs1,000 crore budget for backward castes to the mutts. In reply to a written question in the assembly last December, the state government said it had distributed Rs110 crore to these religious institutions, while spending another Rs189 crore on roads to the mutts.

While the current BJP government has been more generous than some previous governments in terms of support to mutts, especially the new ones, scholars and activists are reluctant to link this to the party’s strong Hindu ideology.

In her paper, Ikegame writes: “There is some legitimacy to the claim made by some Dalit organizations... that the welfare work accomplished by mutts during the flood rehabilitation in Karnataka contributes to the Hindutva agenda, which seeks to rebuild India as a Hindu nation and serves to aggravate communal divisions. Nevertheless, it would be unfruitful to dismiss their activities simply as communal and to paint Karnataka gurus as supporters of fanatical Hindu nationalism."