It is an open secret that India’s new gross domestic product (GDP) series has flummoxed most observers of the Indian economy.

The new numbers seem completely out of sync with other economic indicators such as the revenue growth of listed firms and bank credit growth. Reserve Bank of India (RBI) governor Raghuram Rajan and the chief economic adviser to the finance ministry Arvind Subramanian have publicly expressed scepticism about the new growth numbers.

The key to understanding what is wrong seems to lie in the manner in which estimates for the private corporate sector were computed by the Central Statistical Office (CSO), India’s top statistical body. The final methodology adopted by CSO differed significantly from what was agreed upon by a committee it had appointed, which included independent experts.

As in the case of other sectors of the economy, the estimates of the private corporate sector are based on the report of a sub-committee which examined the new methodology to estimate output. But the version of the sub-committee report published by CSO last month differs dramatically from the original report finalized by the sub-committee in September 2014, according to a recent Economic and Political Weekly article by R. Nagaraj, an independent member of the sub-committee and a professor at the Indira Gandhi Institute of Development Research in Mumbai.

As the chart below shows, the difference between the gross value added in manufacturing between the two versions of the sub-committee report is as high as 108%. 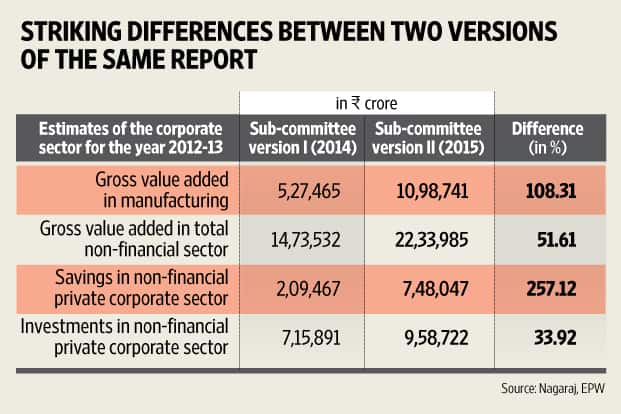 The difference in the estimate of non-financial private corporate sector savings between the two versions of the sub-committee report is still higher at 257%.

According to Ashish Kumar, director general, CSO, the revisions to the original estimates were based on methodological changes suggested by the advisory committee on national accounts.

To understand the methodological changes and their implications, it is important to understand a bit of history first.

In the earlier series, the estimates for the private corporate sector were based on a sample survey of companies conducted by RBI. This sample consisted of only a few thousand companies, and hence the estimates were blown up (or multiplied) in proportion to the coverage of the paid up capital of the sample companies to the total number of companies registered with the ministry of company affairs (MCA).

The problem with such estimation lay in blowing up the sample estimates because it was widely noted that many companies which are registered with MCA are inactive, or shell companies, or do not file returns. As an Economic Times report by Avinash Celestine in November 2014 pointed out, shell companies are often useful conduits to channel black money. In a number of scams unearthed in recent years related to auctions of natural resources, a number of shell companies or dummy firms were used to move unaccounted wealth.

The National Statistical Commission highlighted the problem of fictitious companies as early as 2001, and noted that less than half of registered companies actually filed their balance sheet returns. It pointed out that the presence of a large number of fake firms made national account estimates derived from blowing up RBI sample numbers unreliable.

Independent scholars too reached the same conclusions. A 2003 study by the economist J. Dennis Rajkumar showed that the actual levels of private corporate investments were roughly half the official estimates, and that the over-estimation bias had widened since the middle of the 1990s.

Subsequently, MCA tightened norms on filing returns and initiated e-filing of company returns which had led to an improved database of companies, the MCA-21 database. Given the limitations of the earlier data, the sub-committee on private corporate data revisions suggested that the MCA-21 database be used to generate national account estimates relating to the private corporate sector, since that database included the returns of all working companies. The estimates generated were lower than those arrived at by blowing the RBI sample. But the fresh estimates were accepted since they were deemed more reliable, and the problems with blowing up the RBI sample were widely acknowledged.

However, after the sub-committee finalized its report, the advisory committee suggested a change in methodology. It suggested that the MCA-21 based estimates be blown up again, in proportion to the coverage of the paid-up capital of the companies in the database in the total universe of ‘active’ registered companies. ‘Active’ companies were defined as those that filed returns at least once in the past three years. ‘Active’ companies number nearly 900,000 while the MCA-21 database includes data on 520,000 companies, which account for 85% of the paid-up capital of the universe of ‘active’ companies. The new estimates arrived at blowing up the MCA-21 database were significantly higher than those obtained by blowing up the RBI sample estimates.

“The estimates of the original sub-committee report were based on the MCA-21 database but the revised estimates were generated by blowing up these estimates on the basis of the paid-up capital of all the active registered companies," said Kumar of CSO. “This was done on the recommendations of the Advisory Committee on National Accounts Statistics (ACNAS). Given that the number of companies in the MCA-21 database may fluctuate from year to year, and the data does not reflect the entire universe of active companies, it was suggested that the figures be blown up."

All the revisions in the final estimates were made under the guidance of the chairman of the sub-committee as is the usual practice at CSO, Kumar added.

The crux of the problem is that nobody knows the true number of firms in India, or the precise ratio of fake firms to the total number of firms, and how that ratio varies over time. The sub-committee had considered the 520,000 companies in the database to be the true size of the corporate universe in India but the advisory committee later disagreed.

Given the wide changes in the final results this change in methodology has produced, it is important for CSO to release the complete and validated version of the MCA-21 database as well as the detailed steps it followed in the estimation of the GDP numbers. Only then will it be possible for independent analysts, unaffiliated with the CSO, to verify the authenticity of the published numbers. It is possible that the changes made by CSO are defensible but it should at least release the details behind these changes and open up its databases in an accessible format, given that it is a publicly funded organization.

This is important for three reasons. First, given the new controversy over the estimation methodology, the onus on proving the veracity of the new series lies with the CSO.

Secondly, the new GDP numbers fail basic smell tests. As Nagaraj points out in his article, revisions in the GDP series usually lead to a “small change in the levels (absolute magnitudes) of the estimates, even at current prices". “Seldom, however, is the case when the growth rates (in current or at constant prices) vary with the base year revision. This basic tenet of economic statistics has apparently been violated in the recent revision, causing serious apprehension among data users."

Also, as an analysis of 189 nations over 33 years by the Reuters columnist Andy Mukherjee showed, never has an economy had such an handsome improvement in growth even while recording a big improvement in external balances as India claimed to have had in fiscal 2014.

Finally, given the surprising growth numbers, many global investors have begun comparing the state of official statistics in India to that of China. It is important to correct that perception.

In 2014, the Italian government’s National Institute of Statistics was awarded the Ig Nobel prize in economics, for “proudly taking the lead in fulfilling the European Union mandate for each country to increase the official size of its national economy by including revenues from prostitution, illegal drug sales, smuggling, and all other unlawful financial transactions between willing participants."

The CSO needs to act fast to restore credibility of official statistics unless it wants to win the Ig Nobel prize for 2015.