India's retail inflation quickened to 3.58% in October, the fastest pace in seven months, spurred by rising food and fuel prices

New Delhi: India’s retail inflation quickened to 3.58% in October, the fastest pace in seven months, spurred by rising food and fuel prices, virtually ruling out the possibility of an interest rate cut by the Reserve Bank of India (RBI) in its 6 December monetary policy review.

The consumer price index (CPI), a measure of retail inflation, had come in at 3.28% in September. Data released by Central Statistics Office (CSO) showed that CPI in urban India, at 3.81, was higher than that in rural India, at 3.36%. 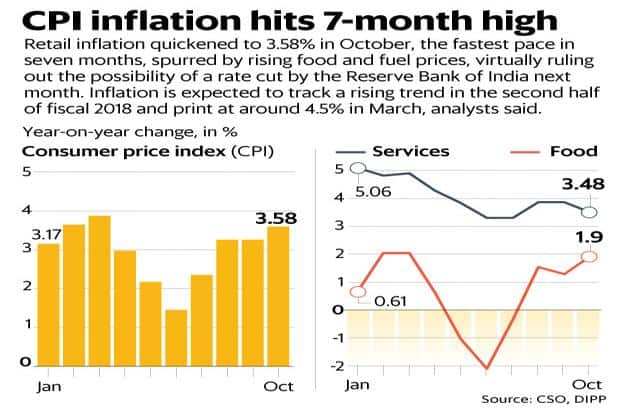 Combined food inflation in October was 1.9% in October, compared with 1.25% a month ago as vegetable prices increased by 7.47% from 3.92% in the previous month. Prices of milk and egg increased modestly and fruit and fish prices came down marginally.

There is little likelihood of rate cuts in the immediate future, with retail inflation expected to track a rising trend in the second half of the financial year and print at around 4.5% in March 2018, analysts said.

Calls for RBI to lower interest rates had become louder after economic growth decelerated to 5.7% in the quarter ended June, the slowest pace in three years.

The MPC in August cut its key policy rate by 25 basis points to 6%, the lowest since November 2010. The panel left rates unchanged in its October review.

RBI has raised its inflation target to 4.2-4.6% for the second half of this fiscal year from 4-4.5%, reflecting the combined impact of unfavourable base effects, the upturn in food prices and the impact of the increase in house rent allowance announced by the central government.

Rising crude oil prices, already at a two-year high, led to fuel inflation of 6.36% in October, compared with 5.56% a month ago. Housing inflation rose to a 40-month high of 6.7% in October, reflecting the staggered impact of the revision in the housing rent allowances (HRA) for central government employees under the 7th Pay Commission.

Indicating the adverse macroeconomic impact of the rise in crude oil prices, global financial services company Nomura Holdings Inc. said every $10 per barrel rise in the price will worsen India’s retail inflation by 0.6-0.7% points and the current account balance by 0.4% of gross domestic product (GDP).

Crude oil price of the Indian basket stood at $62.66 per barrel on Monday.

Individual announcements of pay revisions by various state governments, which would continue into 2018-19, would add to inflationary pressures, particularly given that some states are implementing the increases retrospectively, entailing the release of arrears, said Nayar of Icra.

“Additionally, the HRA revision at the state level may have a similar impact as that at the central government level, on the housing inflation," she added.

To be sure, the GST Council’s decision on Friday to cut the tax rate on 177 items from 28% to 18%, leaving only 50 items under the highest tax slab, is expected to partially ease inflationary pressure on consumers as and when companies start passing on the benefits by cutting prices.