Indians who live in slums not very different from those living elsewhere, in terms of asset ownership

New Delhi: Indians who live in slums are not very different from those who live elsewhere, in terms of their ownership of assets, including consumer products and houses, although they may not have the same access to water and sanitation.

The finding, reflected in Census 2011 data that was released on Thursday, reinforces the consumption story that continues to drive the Indian economy, a story fuelled by rising incomes that have allowed large sections of the population to trade up.

The 2011 Census was the first one that collected data on people living in slums that have become commonplace in a rapidly urbanizing India. It found that around one out of every six households in urban India (17.4%) is in a slum, and that well over one-third of all slum households in the country (38%) are in cities with a population in excess of a million.

The first proportion is likely to
be higher, said
Ramesh Ramanathan
, co-founder of Janaagraha, a citizen’s movement, and technical adviser to the Jawaharlal Nehru National Urban Renewal Mission, because one-third of India’s towns have not reported any slums.

The numbers reflect both India’s rapid urbanization as well as the movement of people to cities in search of better livelihoods—a migration that doesn’t always work to the advantage of city planners who can’t build infrastructure fast enough to meet the demands of a rising population or the migrants themselves, many of whom end up living in shanty towns.

Yet, the slums themselves are not purely residential. The census data shows that 6.7% of the households in urban slums also double up as offices or shops. “This makes them vibrant economic clusters," said Ramanathan.

And some of the asset ownership data shows just how vibrant. 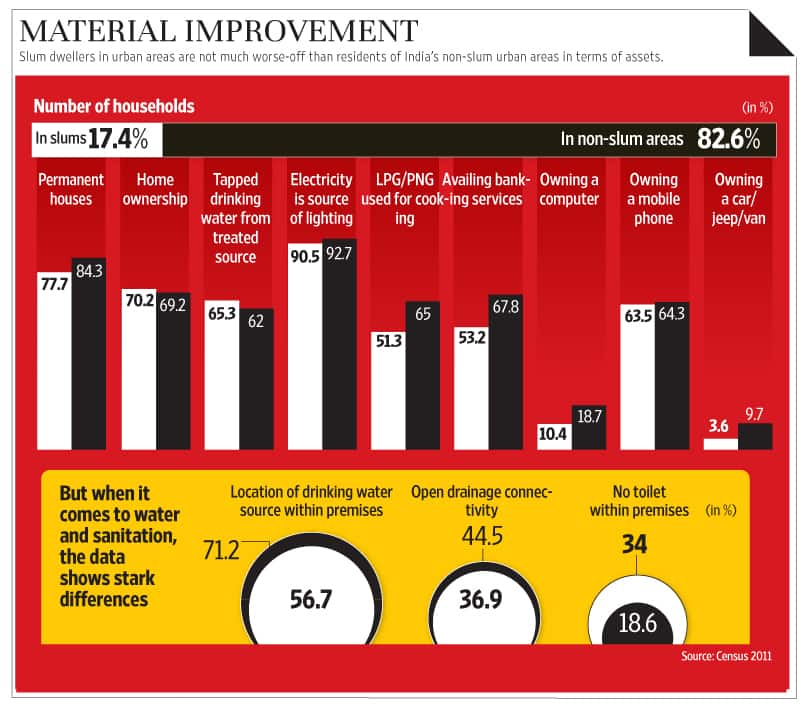 The data released on Thursday is in keeping with other data released from the census last year that showed a significant improvement in the material conditions of most Indians.

The picture isn’t entirely rosy, though.

Several slum households lack basic infrastructure, with only 66% of them having a toilet inside the house, a factor that has an effect on issues ranging from health to women’s safety. And 43.3% of them still don’t have taps inside their houses.

Ramanathan pointed out that only 46.8% of the slum dwellers availed of banking services, which raised a big question for the Reserve Bank of India that is trying to achieve financial inclusion. “Slum dwellers are in the shadow of the banking system. What more compelling evidence do we need that financial inclusion cannot be measured by distance, but by culture, mindset and product," he added. 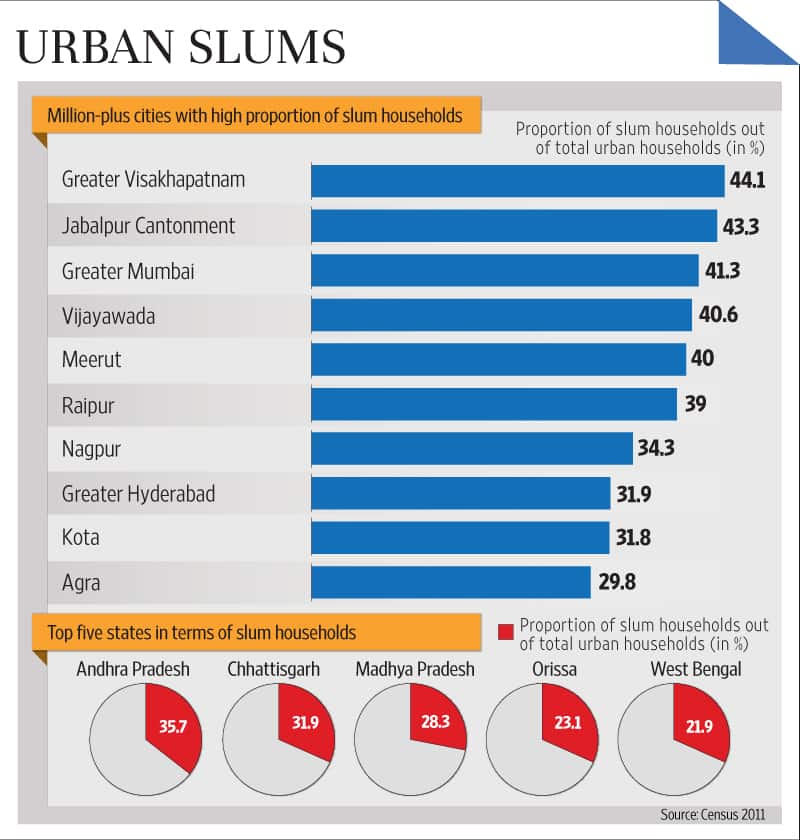 Andhra Pradesh has the highest number of slum households in terms of percentage, with 35.7% of its urban population living in slums, while Kerala has the lowest with only 1.5%. According to the data, Visakhapatnam, Jabalpur, Mumbai, Vijayawada and Meerut have more than 40% slum households.

The census numbers reflect the interest of companies in such markets, said Mohit Bahl, partner (consumer goods and retail transaction service) at audit and consulting firm KPMG. “A lot of FMCG (fast-moving consumer goods) and consumer durables companies are looking to focus on the urban poor and rural segment and innovate with value-based products for this category," he said. “They all realize the potential and size of this market. This segment is best defined as a price-sensitive segment."