After setting up governments in all states of West and North and North-East India India, barring Punjab and Mizoram, the Narendra Modi-led BJP is looking to increase its presence in the East and South even as heads into 2019 Lok Sabha elections

New Delhi: The Bharatiya Janata Party (BJP)-led National Democratic Alliance (NDA) government has increased its electoral footprint from just eight states in 2014 to 20 in four years of Prime Minister Narendra Modi’s leadership to emerge as the strongest political force in the country.

In fact, from just being a “formidable" force in the Hindi-heartland, the NDA is now in power across the North, with the only exception in Punjab, besides being part of ruling coalitions in seven of the eight states in the North-East. 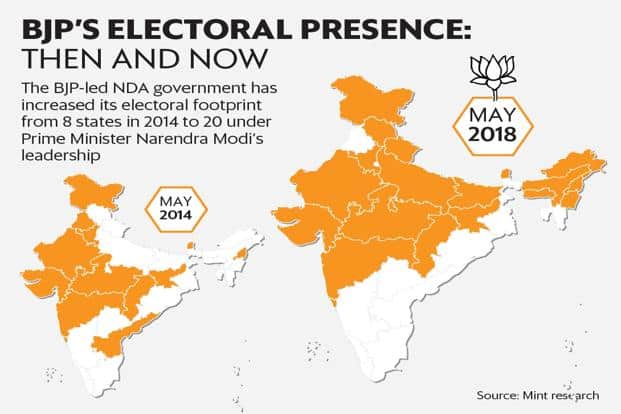 The BJP is now looking to increase its electoral and social presence in the East and the South, where the NDA has marginal presence. Party leaders believe that Modi’s unwavering popularity will eventually help the NDA oust regional heavyweights, such as Mamata Banerjee and Naveen Patnaik, from their bastions, before it can increase its presence beyond the Vindhyas.

“The four years can be defined for BJP on the basis of expansion of the party both electorally and socially. Now, the BJP is the central force in national politics. The entire opposition, whether national or regional parties, is now coming together to oppose us. This is the biggest influence of the BJP on national politics," said a senior BJP leader, requesting anonymity.

The increasing dominance of the BJP in national politics can be established from the fact that it has wrestled away 12 states from the Congress in the last four years, while the NDA has had 14 electoral victories since Modi came to power.

The emergence of the BJP as the political powerhouse took shape at the cost of the Congress, which has not only faced a series of electoral losses, but has seen its support base shrinking even in key states. The trigger was the historic defeat in the 2014 Lok Sabha elections, wherein it recorded the lowest-ever tally with just 44 Lok Sabha members.

Apart from the recent success in Karnataka, where it formed a post-poll alliance with the Janata Dal (Secular), the Congress is left with just Punjab, Mizoram and Puducherry.

“Ever since the Lok Sabha defeat, electorally it has been a difficult time for us, but the tide is turning in our favour now. All the recent Lok Sabha bypolls show that the BJP is losing its momentum and popular support," a senior Congress parliamentarian said, requesting anonymity.

With less than a year left for the 2019 Lok Sabha elections, the Congress is now looking to bring together all opposition parties to form an anti-BJP coalition. The presence of top leaders of more than 15 opposition parties during the swearing-in of H.D. Kumaraswamy as the Karnataka chief minister was seen as a show of strength.

In the last lap of its five-year term, the NDA is also facing a key electoral challenge with three states— Madhya Pradesh, Rajasthan and Chhattisgarh—currently ruled by the BJP going to polls later this year.

It will also be a test for the Congress, which is attempting to rediscover itself ahead of the 2019 Lok Sabha elections.