The victims of WhatsApp forwards are outsiders, the political class is silent, the state is helpless. There are clear patterns behind the recent mob lynchings

New Delhi/Mumbai: The Maharashtra state administration is still trying to come to terms with the shocking lynching on 1 July in Dhule district in northern Maharashtra, where a restive mob of 3,500-plus villagers gathered outside the gram panchayat office in Rainpada village, broke open the locks, and killed five agricultural labourers on the suspicion that they were ‘child-lifters’. There have been 14 incidents of mob lynching and vigilante justice—fuelled by rumours spread on social media—in Maharashtra alone in less than a month since 8 June.

In fact, a police officer, who spoke on the condition of anonymity as he is part of the investigating team, says the police machinery was clueless as “no police station in the areas where the mob attacks have occurred has received a formal complaint about kidnappings or children missing before the attacks". Now, of course, everybody has swung into action. In Maharashtra, at prominent public locations across cities and towns, the state government have put up large boards cautioning people against believing social media rumours. 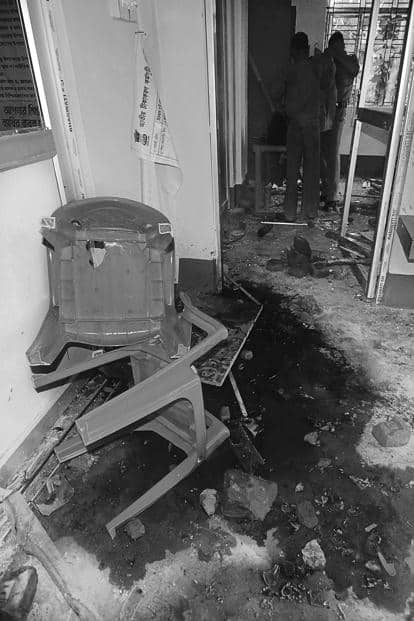 (Right) an angry mob lynched a hawker on suspicion of being a child-lifter at the Tripura State Rifles camp in Agartala on 29 June. Photo: AFP

Over the last year, there have been a number of deaths fuelled by rumours which spread like lightning via WhatsApp, the messaging platform owned by Facebook Inc. Horrific incidents have been reported from the states of Assam, Tripura, Karnataka, Jharkhand among others. A common rumour—that gangs of children-lifters are out to pick up children—has triggered almost all of these incidents of mob frenzy. Those being targeted include migrants, mentally challenged people, nomadic and denotified tribes and other vulnerable sections of society.

“Over 20 people have been killed. It’s unprecedented not just in India but globally. It is as serious as a breakout of an epidemic. Misinformation has been weaponized to target minorities, individuals, activists…," says Pratik Sinha co-founder AltNews, a fact-checking website.

Over 20 people have been killed. It’s unprecedented not just in India but globally. It is as serious as a breakout of an epidemic. Misinformation has been weaponized to target minorities, individuals, activists…- Pratik Sinha, co-founder of AltNews, a fact-checking website

Complicating matters is that there are multiple reasons behind this shocking breakdown in law and order. Is the villain of the piece WhatsApp, which has 200 million monthly users, and did it do enough to stop the spread of rumours? Did the all-powerful, all-seeing local administration and police do its best to catch the societal discord before it erupted? What role did an overall, environment play, at a time when society has internalized lynching to such an extent that a Harvard-educated union minister Jayant Sinha recently honoured and garlanded eight people convicted of lynching a coal trader Alimuddin Ansari in Ramgarh, Jharkhand, last June?

Fear of the outsider

Not only have most of the victims been strangers, there are clear patterns behind most mob lynchings in recent times. In 2012, for instance, a rumour that spread like wildfire on social media had the north-eastern people in Bengaluru fleeing the city overnight. “These were not just random rumours, these are targeted. For example, the messages circulated in Bengaluru targeted Hindi-speaking migrants," said Pranesh Prakash, fellow at the Centre for Internet and Society, a Bengaluru-based think tank.

Experts point out that victims are usually outsiders as they are not seen as being rooted in society. “There is a structural marginalization based on caste, class which is usually attributed with such rumours. Invariably the attack is against those who already have a reputation," said T.K. Oommen, sociologist and professor emeritus at the Centre for the Study of Social Systems, JNU.

There is a structural marginalization based on caste, class which is usually attributed with such rumours. Invariably the attack is against those who already have a reputation- T.K. Oommen, sociologist and professor emeritus at the Centre for the Study of Social Systems, JNU

Take the Dhule incident. According to the police official cited earlier, “In Maharashtra particularly there has been a method to this madness against some tribes like the Nath Gosavi tribe, to which the victims in Dhule belonged, and the Phase Pardhis. These communities are routinely identified as of criminal bent and have been on the receiving end much before social media emerged."

“Rumours are not a one-time event. They emerge due to unrest in society. This is usually the situation in a society characterized by fear. The general tendency in society is that they are unreliable. That leads to consequences which are usually bad," says Oommen.

Even as the Union home ministry has no official record of mob lynching, social media has become the primary catalyst for self-styled cow vigilantes, as well, to bring to book those who have reportedly been indulging in cow slaughter. On 1 April 2017, Pehlu Khan, along with six others, was returning from Jaipur to his village in Nuh, Haryana, carrying cows and calves for the purpose of dairy farming. They were stopped at the Jaipur-Delhi national highway by 200 cow vigilantes, who beat Khan to death.

Social media has become the primary catalyst for self-styled cow vigilantes, as well, to bring to book those who have reportedly been indulging in cow slaughter

Since 2014, there have been numerous such incidents of mob violence that have normalized the brutal act. The fact that political leaders have not been openly and quickly condemning such instances sets out a signal to the administration and people at large. All this comes at a time when sociologists and mental health experts point out that there has been a change in the societal set-up. They say that unlike older times, there is no folklore anymore. There is also a breakdown of the traditional society set-up along with a speed up of technology which gives a boost to the spread of such rumours.

Mental health experts say that people tend to believe messages sent through platforms like WhatsApp as they usually are sent by a trusted source. “As a result, doubts regarding the credibility of the source of the messages tend to get diluted. And therefore, we are inherently more likely to not think of rejecting the content of the message as being false or inauthentic," said Samir Parikh, director of department of mental health and behavioural sciences at Fortis Healthcare.

The role of WhatsApp

On 8 June, two men, who had gone to Kangthilangso waterfall in Karbi Anglong district in Assam were beaten to death by villagers at Panjuri Kachari on suspicion of being child-lifters.

While the police immediately sprung into action, they are still heavily dependent on the response mechanism of the social media companies. “WhatsApp circulation has increased exponentially and we are now thinking of ways to control the flip side of it. When we are faced with specific cases pertaining to social media we write to the platforms separately, but their response time is long," said Pallab Bhattacharya, special director general of police (special branch), Assam.

There is no literacy training on the fact that the platform has rumours and misinformation, how to spot them and avoid becoming a source of it- Pranesh Prakash, fellow at the Centre for Internet and Society, a Bengaluru-based think tank

Pranesh Prakash, fellow at the Centre for Internet and Society, a Bengaluru-based think tank.

According to Prakash, while WhatsApp keeps reminding users that their messages are encrypted, it does not remind its users to not forward unverified information or misinformation, as is prohibited by its acceptable use policy. The acceptable use policy is available only in English, and there is no user conditioning about what kind of messages aren’t acceptable. “Also, there is no literacy training on the fact that the platform has rumours and misinformation, how to spot them and avoid becoming a source of it," he added.

For instance, Akash Tomar, superintendant of police-city (Ghaziabad) found it challenging to handle the rumours spread through social media platforms during Dera Sacha Sauda riots that took place not very far away from the state and other similar sensitive incidents. “At one point, WhatsApp can help the police in disseminating important and useful information for citizens but off late we have witnessed that such social media platforms have a potential to trigger riots, lynching and other crimes," Tomar said.

While WhatsApp says it will take appropriate measures to curtail the spread of fake news , simply shooting the messenger is not going to be enough. These murders have not taken place in a digital vacuum.

Komal Gupta and Neetu Chandra Sharma in New Delhi contributed to this story.

Catch all the Politics News and Updates on Live Mint. Download The Mint News App to get Daily Market Updates & Live Business News.
More Less
Subscribe to Mint Newsletters
* Enter a valid email
* Thank you for subscribing to our newsletter.
Topics
mint-india-wire long-reads