New Delhi: India’s retail inflation eased sharply to 4.31% in September, the slowest in more than a year, from 5.05% from August, mainly on account of a sharp fall in food prices.

Not only does it make the Reserve Bank of India (RBI) look prescient, it also gives the central bank room to contemplate another rate cut—especially in the backdrop of the contraction of industrial output in August.

Food inflation slowed to 3.88% in September from 5.91% in August as prices of vegetables and pulses fell.

A Reuters poll of 30 economists had forecast that retail inflation based on the consumer price index (CPI) will fall to 4.8% in September.

This is the second consecutive month in which retail inflation has eased. 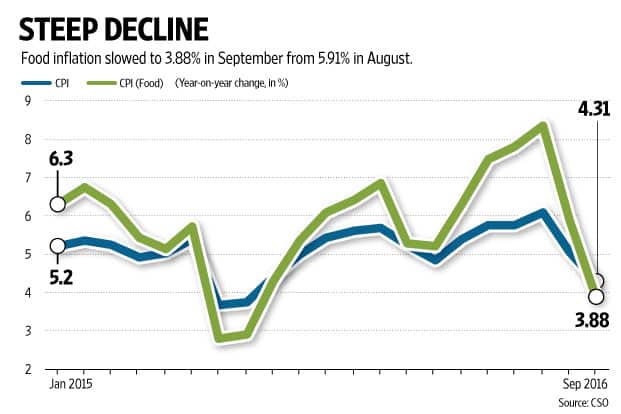 Retail inflation for September is also within RBI’s comfort zone. The central bank is targeting to keep retail inflation at 4%, with a two percentage point-band on either side.

Earlier this month, the newly constituted monetary policy committee (MPC) had unanimously voted to reduce the key policy rate by 25 basis points (bps) to 6.25% to support growth. One basis point is one-hundredth of a percentage point.

“The Committee expects that the strong improvement in sowing, along with supply management measures, will improve the food inflation outlook. It notes that the sharp drop in inflation reflects a downward shift in the momentum of food inflation— which holds the key to future inflation outcomes—rather than merely the statistical effects of a favourable base effect," RBI said in its statement while announcing the MPC’s decision.

“The Government has announced several measures to cool food inflation pressures, especially with regard to pulses. These measures should help in moderating the momentum of food inflation in the months ahead. This has opened up space for policy action," it added.

Data from the agricultural ministry showed sowing of kharif (monsoon) crops increased this year as compared with last year. Till 23 September, 106.8 million hectares have been planted under different kharif crops, an increase of 3.55% from the area sown by this time last year. Sowing of pulses, a key pressure point in retail inflation, saw almost a 30% increase this year to 14.6 million hectares. Other crops such as rice, coarse cereals and oilseeds have also seen an increase in the sowing area, with sugarcane and cotton being the exceptions.

Madan Sabnavis, chief economist at Care Ratings, said that inflation, particularly in food items, will ease due to fresh crops entering the market after a good monsoon.

“Going ahead, with inflation stabilizing in coming months, we do expect another 25 bps cut in rates in December by the RBI," he said.