New Delhi: Soot from wood smoke and diesel exhaust is now being linked to awry monsoon patterns and unusually severe cyclones, in addition to atmospheric carbon dioxide, which was earlier thought to be the primary cause. 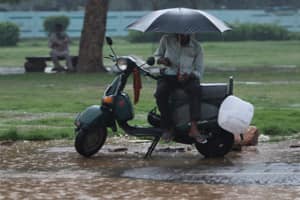 While the infamous Asian Brown Cloud, a haze of particulate matter that looms over much of India and China, has previously been blamed for melting glaciers, these studies suggest they may be the reason for confounding observations such as a spike in the intensity of pre-monsoon and monsoon cyclones over the Arabian Sea, and a generally depressed Indian monsoon rainfall over the past three decades compared with century-old records.

The international community is gridlocked over the amount of money nations must spend to contain greenhouse gases, which is responsible for global warming. How much of that warming afflicts regional climate such as fluctuating Asian summer monsoon rainfall or searing summers over Russia and Europe is still contentious.

If aerosols and carbon particles were proved to play a greater role in these weather patterns, experts say there could be greater international pressure on India to adopt cleaner technology, and spend more money to do so.

The India Climate Report, which documents the key attributes of the country’s weather, confirms a rise in intensity of severe cyclones and an average 10% drop in mean rainfall, but doesn’t explicitly explain why.

“There have been no clear answers," said Ajit Tyagi, director general, Indian Meteorological Department. “In the last decade, it was fashionable to blame it all on global warming and greenhouse gases. Now it seems there’s a focus on aerosols."

On Thursday, Amato Evan, an environmental scientist in the University of Virginia’s College of Arts & Sciences, reported in Nature journal that soot and aerosol accumulation were upsetting wind circulation patterns over Asia, which historically blunted the force of cyclones over the Arabian Sea.

The onset of the summer monsoon season produced strong winds in the lower and upper atmospheres that travelled in opposite directions, which made formation of cyclones virtually impossible in July and August.

However, researchers identified a trend of increasingly strong cyclones in the months immediately preceding the monsoon season in the region. In June 1998, a big cyclone struck Gujarat, killing nearly 2,900 people. In June 2007, cyclone Gonu, which saw winds in excess of 156 miles a hour, caused $4 billion in damages when it made landfall in Iran. In June 2010, cyclone Phet struck the coastlines of Pakistan and Oman, causing nearly $2 billion in damages.

The weakening wind patterns over the past 30 years have corresponded with a buildup of aerosols in the atmosphere over India, which deflect sunlight from the surface, creating dimming at the ground level, the researchers said.

“We are showing that pollution from human activity—as simple as burning wood or driving a vehicle with a diesel engine—can actually change these massive atmospheric phenomena in a significant way. It underscores the importance of getting a handle on emissions in the region," Evan said in a statement.

Earlier this year, Veerabhadra Ramanathan, a climate researcher at the Scripps Institution of Oceanography in the University of California, who has been looking at the relationship between aerosols and monsoon patterns over several decades said in a report in Science journal that monsoon rainfall over India was significantly lower between the 70s and the 2000s compared with the previous 40 years.

“The only thing that’s been systematically changing in this part of the world is pollution," said Ramanathan. “There’s been a huge growth in pollution from human activity from the Indian subcontinent over the last 60 or so years, a six-fold increase in emissions of pollution like black carbon and sulphates."

J. Srinivasan, a senior climatologist at the Indian Institute of Science, said Evan’s paper was important work, but relied on too little data to make definite conclusions. He added that the tussle between aerosols and carbon dioxide as being the greater tinkerer of monsoon patterns was more political than scientific.

“The big developed countries would rather shift the blame (of global warming’s adverse effects on climate cycles) on aerosols and black carbon, which are largely found in Asia, than greenhouse gases until they have suitable technology," he said. “This is good work (the Nature study), but relies on less than 10 years of data. That's too short a time to understand long-term climate variability that spans centuries."

Last year, US secretary of state Hillary Clinton lent her weight to a $50 million programme to promote clean stoves in India and other developing countries.

“It’s undeniable that the reducing black carbon and aerosol pollution will significantly improve respiratory health, but linking it to climate change is a little far out as of now," said Srinivasan. “It took 60 years to link global warming and carbon dioxide. Black carbon is just 10 years old."