India's ranking in the 7th world giving index shows improvement over last year. But India tops the list only in terms of numbers and not in terms of the percentage of total population.

New Delhi: In terms of the sheer number of people, India tops the list in all three parameters of the World Giving Index 2016, released by Charities Aid Foundation (CAF) on Tuesday.

CAF is an international non-profit organization promoting effective giving and philanthropy. It releases an annual  report based on data from Gallup’s World View World Poll, an ongoing research project carried out in more than 140 countries representing about 96% of the world’s population (around 5.1 billion people).

Overall, Myanmar was the most generous country for the third year running with a 70% overall score. The United States was second with 61%, making it the most generous nation in the western world, followed by Australia with a score of 60%.

India received a 29% overall score in the world giving index. The index is published one month before #GivingTuesday – 29 November – the global day of giving when people are asked to give their time, money or voice to a good cause. 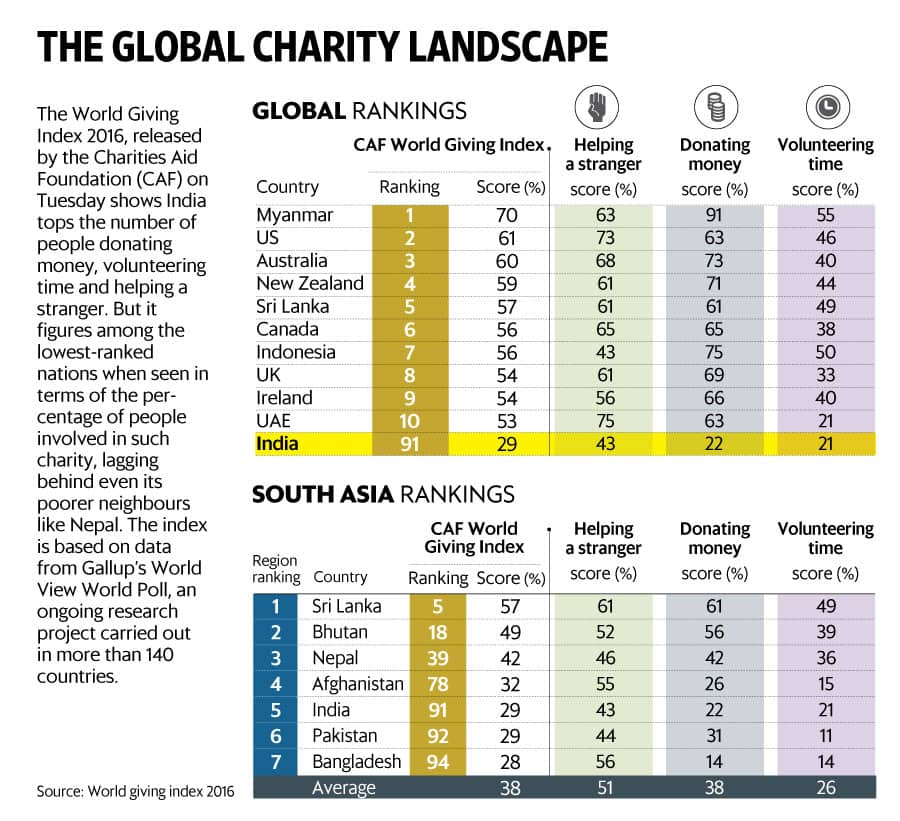 But even with 203 million people donating money, 401 million people helping a stranger and 200 million people volunteering time, India ranks 91 in the index. This is because in terms of numbers India is among the highest but when taken as a percentage of the total population, India lags behind. Even some of its poorer neighbours like Nepal and Afghanistan have fared better. Of the 8 South Asian countries, India is ranked 6, just above Pakistan and Bangladesh.

As Neera Nundy, co-founder of Dasra – a strategic philanthropic organization suggested, it may be unfair to look at the Indian population as a homogenous whole. “A majority of India's  population lives under the poverty line and the sample is likely to include some people from that segment as well."

She suggested that to get a real picture of the giving space in India, the sample survey may need to be more nuanced. “For instance, if you take the sample of just the middle class – those people who have discretionary income to spare – you are likely to get a better ranking," she said.

However, this year’s ranking is an improvement over last year where India was ranked 106, but still a far cry from 2013 where India was ranked at 69. Gallup interviewed 3,000 Indians face-to-face between 3 April  and 14 May 2015 in 11 languages — Hindi, Tamil, Kannada, Telugu, Marathi, Gujarati, Bengali, Malayalam, Odia, Punjabi and Assamese.

The survey excluded the population living in Northeast states and on remote islands. The excluded areas represent less than 10% of the population. The index looks at three measures of giving: the percentage of people who have given to charity; volunteered their time; or helped a stranger in the month prior to the survey.