How do you solve India’s air pollution problem?

Policy interventions can help improve air quality, but only when they attack the roots of the crisis, tackle the right problems and are implemented well

Last month, World Health Organization (WHO) chief Tedros Adhanom Ghebreyesus described air pollution as “the new tobacco". he top half of India portends how bad it can get: in WHO’s list of the world’s 20 most-polluted cities in terms of PM2.5 levels, 14 are located in a belt that extends from Punjab to Bihar. Between 2007 and 2017, the air quality here has gone from bad to worse. 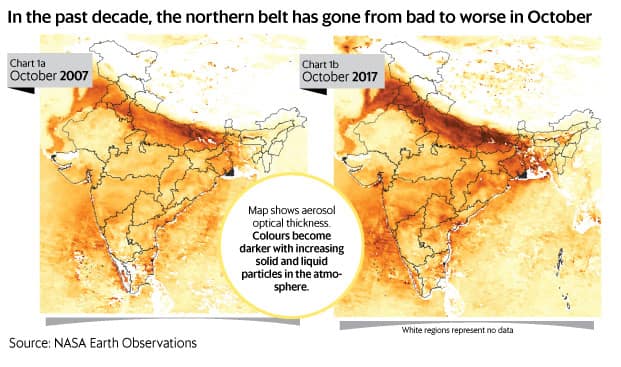 One of the cities on this belt is New Delhi, the biggest battleground of this crisis and which, come Diwali, is set to enter yet another state of air emergency. New Delhi is also a petri dish of policy interventions fire-fighting this mess. And while policies, dating back to the early-2000s, have made a difference, these interventions cannot just be implemented during times of extreme pollution. Tackling India’s air pollution requires a holistic, proactive approach that attacks the roots of the crisis.

Take the current poison of Delhi’s air—the fire set to crop residue by farmers in neighbouring states every year. According to a 2015 IIT Kanpur study of air pollution in Delhi, crop burning accounts for 26% of winter PM2.5 pollution.

In December 2015, the National Green Tribunal (NGT) ordered the governments of Haryana, Punjab, Rajasthan and Uttar Pradesh to enforce a ban on stubble burning. Data from the National Aeronautics and Space Administration’s (Nasa’s) Moderate Resolution Imaging Spectroradiometer (Modis) instrument shows the count of fires in these states and Delhi dropped from 30,902 in 2016 to 22,809 in 2017. The maximum number of fires on any single day was successively lower in 2016 and 2017, compared with 2015. PM2.5 concentrations on the days of the worst air quality in Delhi, too, were lower for these two years.

Still, the PM2.5 reading is far from ‘good’ or ‘satisfactory’ (charts 2a and 2b). The policy has been implemented partially: states have not implemented the stubble ban effectively. Fires continue to rage across the four states, highlighting how fighting air pollution will require coordination. 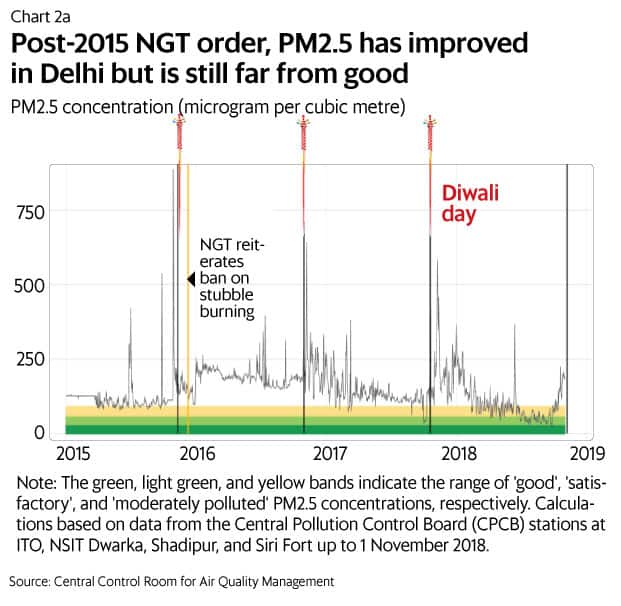 Another policy intervention has targeted vehicular emission, which accounts for 25% of PM2.5 concentrations in the winter months and 8.5% in summer. In 2002, the Supreme Court ordered the conversion of public transport vehicles to compressed natural gas. More stringent pollution tests were introduced in 2006. Between 2002 and 2007, PM10 levels fell. 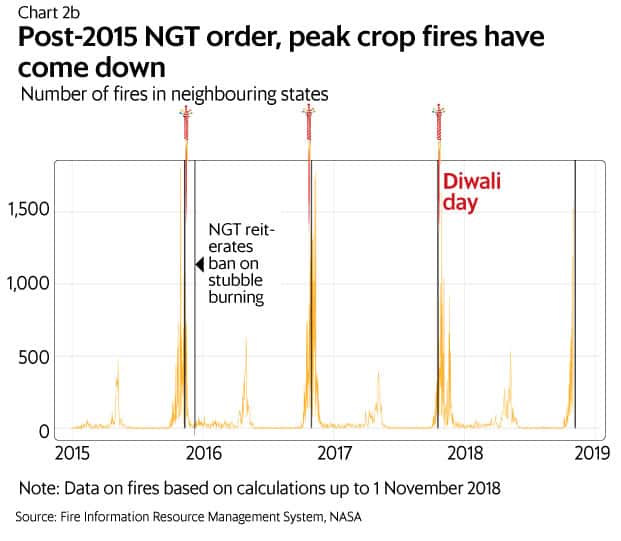 This was a brief respite. Between 2007 and 2014, PM10 levels doubled, as the number of private vehicles in Delhi rose from 5.3 million to 8.5 million. Simultaneously, there was a pullback on policy action. For instance, there have been no upgrades to cleaner fuel emission norms. It is only this year that cleaner Bharat Stage-VI (BS-VI) fuels have been introduced in Delhi. The SC has also mandated that starting April 2020 new vehicles should meet BS-VI norms (chart 3). 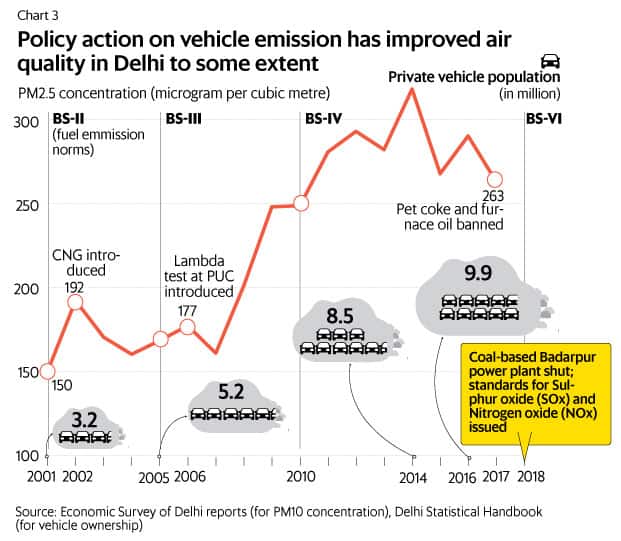 These experiences highlight the importance of tackling all the sources of pollution throughout the year to improve air quality.

Another important source of PM2.5 in Delhi’s air is secondary particles (those formed from gases such as sulphur oxides (SOx) and nitrogen oxides (NOx), coal, and fly ash). Industries in and around Delhi contribute to this by using coal, furnace oil or pet coke as fuel. This has been an area of policy neglect with no action targeting industries taken between 2006 and 2016.

This has changed in recent times. In October 2017, the SC banned pet coke and furnace oil in UP, Haryana and Rajasthan. The Badarpur plant—the lone coal-fired plant in Delhi—was shut down this year, and industry emission standards for SOx and NOx were issued. An Environment Pollution (Prevention and Control) Authority report published in October, however, shows that there is no status report on the implementation of SOx and NOx standards yet.

Delhi and India clearly require more policies that target all the major sources of emissions—but these policies should also provide alternatives. Sumit Sharma, director of Earth Science and Climate Change at The Energy and Resources Institute, warns that the bans and restrictions on fuels will work only if the use of cleaner fuels is incentivized.

“With the right kind of push and pull measures, if you introduce gaseous fuels in NCR, it can bring tremendous benefits," he says. He also suggests that as new vehicular norms become effective, monitoring older vehicles should remain on the radar for action. Public transport options that are not based on fossil fuels should be increased. Finally, for a problem that plagues an entire region, these measures also need to move out of Delhi and make up for the lost time.

Abhishek Jha is a recipient of the Mint-Hindustan Times-HowIndiaLives Data Fellowship 2018.