Home >Politics >Policy >Wholesale inflation falls to 5.7% in March from 6.5% in February

Wholesale inflation falls to 5.7% in March from 6.5% in February

Wholesale inflation falls to 5.7% in March from 6.5% in February mainly due to a fall in mineral and fuel prices, while food prices continued to rise

New Delhi: India’s wholesale price index-based inflation fell to 5.7% in March from a two-and-a-half years high of 6.5% in February, mainly due to a fall in mineral and fuel prices, while food prices continued to rise.

The government data showed on Monday that mineral prices fell to 24% in March from a rise of 31% in February, while fuels became cheaper by 18% as diesel prices were revised downwards. 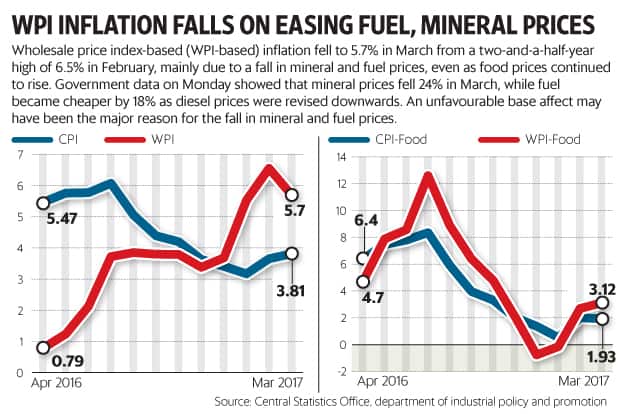 The unfavorable base affect along with moderation in the imported inflation are cited as major reasons for the fall in the mineral and fuel prices.

“A waning of the unfavorable base for minerals as well as the 1.8% appreciation of the INR relative to the US$ cooled WPI inflation in March 2017. Notwithstanding a mixed trend for commodity prices, the appreciation of the rupee eased landed costs of various inputs. Core Inflation therefore declined to 2.1% in March 2017, driven by lower inflation for various metals and cement," said Aditi Nayar, principal economist at rating company ICRA Ltd

The core inflation last month was at 2.4%.

Five of the six major categories have shown fall in the WPI index, except for food articles, which firmed up to 3% in March from 2.7 % in February. The increase in food prices was primarily due to higher prices of fruits, vegetables and rice. Vegetable prices have shown a sharp increase of 6% in March from negative 8% last month, while fruits and rice have shown marginal increase. On the contrary the prices of pulses and the cereals have cooled considerably compared to the previous month.

In case of manufactured products, the index declined to 3% from 3.7% in February. Non-food articles have also shown a decline.

The government has also revised its January WPI inflation to 5.53% from 5.25%.

The consumer price index (CPI) which was released by the government last week showed that the CPI-based inflation picked up to 3.85% in March.

The Reserve Bank of India (RBI), in its monetary policy review on 6 April, said headline CPI inflation is set to undershoot the target of 5% for the March quarter in view of the sub-4% readings for January and February. For 2017-18, RBI projected inflation to average 4.5% in the first half of the year and 5% in the second half of the financial year.

The central bank said risks are evenly balanced around the inflation trajectory at the current juncture.